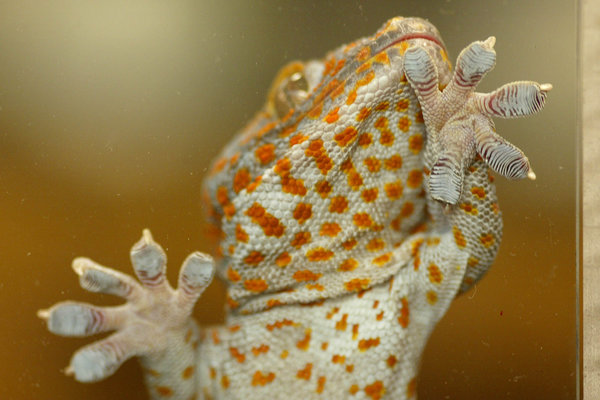 There is a wide array of obstacles facing the drone deliveries proposed by Amazon and Google. If the deliveries do happen, however, researchers from the mechanical engineering lab at Stanford University believe they have made a technological leap in the science of the drone’s landing.

Working with researchers at the University of Pennsylvania, they have figured out how to enable a quadcopter drone to stick a landing — at any angle — much like a flying gecko or a bat. Without any kind of suction or sticky, the flying robot can now perch on a slippery surface.

This means that technologically, it would be possible for a pizza-carrying drone to land on a 14th-floor window or for a robot, carrying a medical kit, to perch on a smooth, vertical rock wall.

The design borrows from a common source of ideas for futuristic technologies: nature. It is the latest incarnation of the geckolike climbing robot known as Stickybot, which the Stanford roboticist Mark Cutkosky and his team created in 2010.

Previous efforts to design climbing robots had relied on using transparent tape or suction cups to ascend. This new robot, modeled after a gecko, scaled smooth glass walls using foot pads that could alternately stick and release with ease.

The reason a gecko does not fall off a wall is because each climbing pad contains hundreds of ridges that have millions of thin hairs. Each of these hairs has bundles of split ends, which create molecular attraction, sticking when pulled in one direction and releasing in the opposite. You can see how this works in this video.

The original climber weighed about a half pound and was almost a foot long. The team has now created a much smaller but even more powerful robot. Much like an Asian weaver ant, which can drag many times its body weight, a ultralight nine-gram robot can now hoist as much as 1,000 grams. Researchers at the Stanford lab point out that this is equivalent to a human’s climbing up a skyscraper while carrying an elephant.

What might these robotic creatures be used for? The researchers are considering a variety of applications, like toys and improved picture hangers. David Christensen, a mechanical engineering graduate student who is working on the weight-lifting project, suggested that “you could easily robotize a house plant to make it drag itself into the sunlight all the time, and that would be really cute and perhaps even useful.”

When the robot’s geckolike movements and antlike strength are paired with a quadcopter drone, the possibilities expand further. Companies like Amazon and Google are working on the idea of using drones to home-deliver packages. But landing requires pinpoint robotic maneuvering, and when a quadcopter is turned vertically, it loses all aerodynamic lift. Applying the new technology could give the flying robot the ability to land on any surface, at any angle, carrying significant weight.