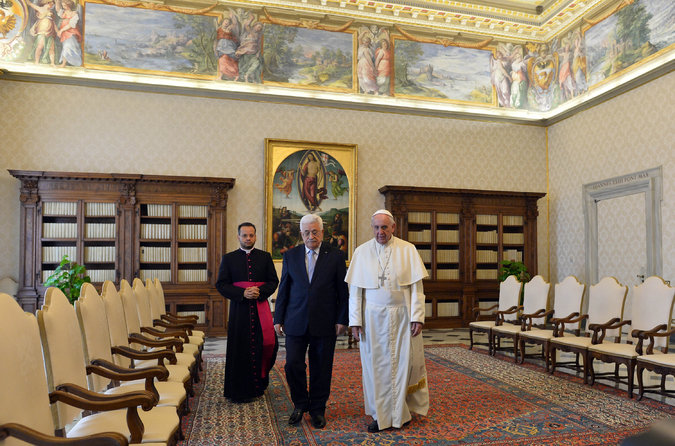 JERUSALEM — Every word counts in the delicate diplomacy of the Middle East, where negotiators have often resorted to creative ambiguity.

So Pope Francis’ sotto voce greeting to President Mahmoud Abbas of the Palestinian Authority during a meeting at the Vatican on Saturday, in which he referred to Mr. Abbas as an “angel of peace,” but with an uncertain verb, has caused a linguistic and political furor that is still resonating days later.

Did the pope tell Mr. Abbas “You are an angel of peace,” as many news outlets, including the main Italian news agency ANSA, The Associated Press and The New York Times, reported? That phrasing pleased Palestinians but infuriated some Israelis and Jewish leaders around the world.

Or was the pope encouraging Mr. Abbas with the words, “May you be an angel of peace,” as other major Italian news media, like La Repubblica and La Stampa, reported, a formulation that suggested more exhortation than commendation, and sounded better to pro-Israeli ears.

It all seemed to boil down to the difference between the verb sei, Italian for “you are,” and sia, which means “may you be.” Pro-Israeli advocates were quick to pick up on the discrepancies.

Israel has claimed Mr. Abbas incites violence among Palestinians and has blamed him for the breakdown in peace talks last year. Palestinians see the Israelis as instigators of violence and as the main obstacle to a peace settlement. Neither side is ready to accept that the other is an angel, or messenger, of peace.

The discord came in what had already been a tense week for the triangle of Vatican-Israeli-Palestinian relations. The Vatican announced Wednesday that it would soon sign a treaty that includes recognition of the “state of Palestine,” lending symbolic weight to an intensifying Palestinian push for international support for sovereignty that bypasses negotiating with Israel.

Israel’s Foreign Ministry said it was disappointed by the Vatican’s decision, though the Vatican effectively granted recognition after the United Nations granted Palestine nonmember observer status in 2012. Over all, 135 nations have recognized a state of Palestine. The British, French, Spanish and Irish Parliaments have in recent months passed resolutions urging their governments to follow suit.

The conversation at the center of the uproar took place before a small, preselected pool of reporters. The “angel of peace” phrase was murmured softly and was, those present said, difficult to hear.

The pope was speaking in Italian, which he speaks well, but not natively. So it is not entirely clear whether he confused sei and sia, whether those straining to hear deciphered it differently, or if in the course of the conversation he said both. In 2014, during a visit to Israel and the West Bank, the pope did indeed refer to Mr. Abbas as “a man of peace and a peacemaker.”

Francis has deep relationships with Jews dating back decades and has made meaningful gestures of friendship. Abraham H. Foxman, the departing director of the Anti-Defamation League, said he thought the “You are an angel” reports “came as a bolt of lightning to the Jewish community, given the admiration and expectations world Jewry has for this pope.”

Mr. Foxman, who is currently visiting Israel, said his organization had “reached out to the Vatican,” without elaborating.

The Rev. Federico Lombardi, the Vatican spokesman, issued a statement of clarification on Sunday in response, he said, to questions from journalists. Engaging in some of his own diplomatic ambiguity, he said that the pope had presented Mr. Abbas with a gift often given to visiting presidents: a bronze medal that represents an angel of peace. In the statement, he said that the word angel refers to a “messenger.”

When the pope presents the medal, Father Lombardi said, “he offers a few words of explanation of the gift as well as an invitation to a commitment to peace on the part of the recipient.”

The Vatican says angels are, in fact, “messengers.”

Father Lombardi said he had been in the audience but did not hear the exact words spoken “because they were said in a very colloquial manner between the pope and the Palestinian president who were in close proximity to one another.”

On Monday, Father Lombardi added, “The words that the pope used are marginal.” He said that the Vatican never reports on what the pope says during private discussions, and that what is expressed during an exchange of gifts is not meant to be recorded.

Emmanuel Nahshon, the spokesman for the Israeli Foreign Ministry, said he heard a recording of the conversation, had consulted with Israel’s ambassador to the Vatican and was satisfied that the pope had said, “May you be an angel of peace.”

“He is far from an angel of peace,” Mr. Nahshon said of Mr. Abbas, adding, “If he was, perhaps by now there would be peace.”

Hanan Ashrawi, a member of the Palestine Liberation Organization’s executive committee, laughed when asked about the controversy, saying she was not about to provide “a biblical exegesis on ‘may you be’ or ‘you are’.”

“Either way,” she said, speaking by telephone from Ramallah in the West Bank, “the analogy and the connection is there.”

Ms. Ashrawi was not at the meeting in the Vatican and said she had not bothered to call and ask exactly what words were spoken to Mr. Abbas. She pointed to the wider context of Mr. Abbas’s visit, including the recognition issue and the canonization of two 19th-century nuns from Ottoman-ruled Palestine on Sunday.

Mr. Foxman, of the Anti-Defamation League, also sounded mollified. “The good news is that there are all sorts of efforts to step back,” he said, referring to the Vatican spokesman’s efforts to smooth the atmosphere.

“That is more important than how that phrase got there,” he said, adding, “Whatever it is, whether it was misspoken, miswritten or misread, we welcome it.”