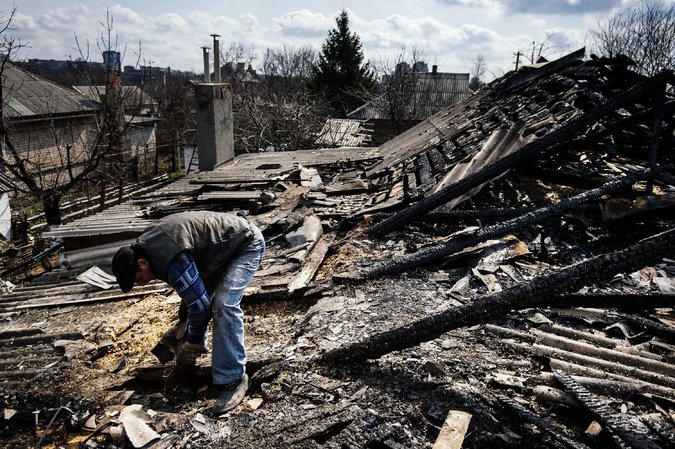 MOSCOW — President Petro O. Poroshenko of Ukraine on Monday denounced calls for “federalization” of the country, which Russia has endorsed as a way of granting political autonomy to the areas of eastern Ukraine controlled by pro-Russian separatists.

Establishing greater local autonomy and governmental authority is widely viewed as crucial to settling the nearly yearlong war in the eastern regions of Donetsk and Luhansk, and it was a central plank in a cease-fire accord signed in February. But there are fierce disagreements over how to shape those powers, and how far they would extend.

Speaking at the first meeting of a commission charged with developing amendments to the Ukrainian Constitution, Mr. Poroshenko described federalization as tantamount to breaking apart the country, and said he was so certain Ukrainians would reject the idea that he was willing to put it to a national referendum.

“Why do I dwell in great detail on the idea of federalization?” Mr. Poroshenko said. “Because it is like an infection, a biological weapon, which is being imposed on Ukraine from abroad. Its bacteria are trying to infect Ukraine and destroy our unity.”

Leaders of the self-declared people’s republics in Donetsk and Luhansk have complained bitterly in recent weeks that Mr. Poroshenko and other officials in Kiev, including members of Parliament, were refusing to take the necessary steps to carry out the political provisions in the cease-fire agreement, which was signed in Minsk, Belarus.

In his speech to the new 72-member constitutional reform commission, Mr. Poroshenko said Ukraine would press ahead with its own plan for “decentralization” of governmental authority, modeled after a similar effort in Poland.

Referring obliquely to Russia and the Russian-backed separatists, Mr. Poroshenko said: “They started an aggression, they went to war, trying to impose federalization with iron and blood. I will not allow this to happen. Ukrainian people will not allow it to happen.”

He added: “For those who wish to put forward the thesis of federalization and cast it as a debate, we have the ultimate tool — a referendum. And as to me, I’m ready to hold a referendum on the state structure of Ukraine, if you find it necessary.”

In his speech, Mr. Poroshenko spoke of the historical importance of Pylyp Orlyk, a Cossack nobleman and Ukrainian hetman, or leader, in exile who in 1710 wrote the Bendery Constitution, which many scholars believe was the first to codify the separation of powers among the executive, the legislature and the judiciary as a democratic standard.

Mr. Poroshenko urged the head of the constitutional commission, Volodymyr Groysman, who is the speaker of Ukraine’s Parliament, to seek input from the Opposition Bloc — the one minority faction in the legislature — which includes former allies of President Viktor F. Yanukovych, who was ousted last year after huge street protests.

“I would like very much, and believe it is possible, for the commission to become a unifying platform of all political forces, society, domestic and international experts in working out such important constitutional initiatives required by our society,” Mr. Poroshenko said.

In eastern Ukraine, however, it was clear that Mr. Poroshenko was already falling short of that goal. Separatist leaders noted that they had not been invited to join the commission on constitutional changes, and they took issue with Mr. Poroshenko’s remarks, including his insistence that Ukraine would remain a “unitary state” and his declaration that Ukrainian would remain the country’s only official language.

“These things are absolutely unacceptable,” Andrei Purgin, head of the Donetsk People’s Republic, told the Interfax news agency. “Everything they now say and do contradicts the Minsk agreements that took so much work to achieve.”

As for the commission and the constitutional amendment process, Mr. Purgin told Interfax: “We did not receive any invitations. We don’t have any representatives there.”