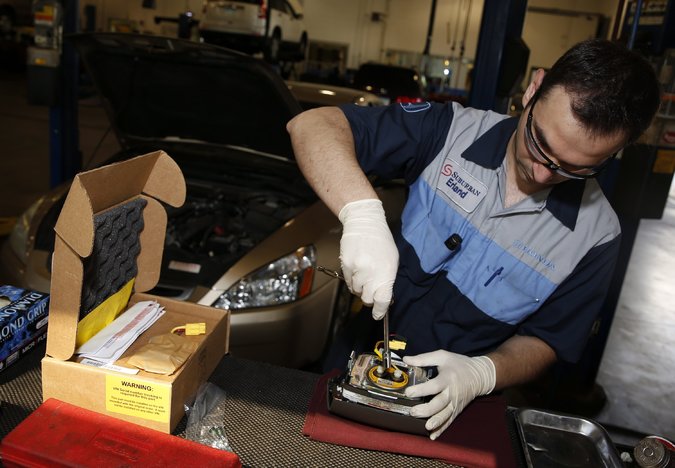 As it prepared for a congressional hearing on Tuesday, the Japanese auto supplier Takata vowed on Monday to stop producing the driver-side inflaters that have been tied to a defect in its airbags. But the company said it would continue using an airbag propellant that experts said was dangerous.

The Japanese supplier acknowledged two weeks ago that its airbags could be defective, and could burst violently, sending shards of metal at passengers. The company agreed to double the number of cars that need to be recalled in the United States to almost 34 million, the largest such action in American history.

Takata, however, said it would not switch away from the use of a chemical compound in its propellant that experts have said can become dangerous if exposed to moisture or swings in temperature.

The company says it considers it “safe and effective for use in airbag inflaters when properly engineered and manufactured,” Robert Rendine, a Takata spokesman, said in an email.

Mr. Kennedy, the nation’s top auto safety regulator, and representatives from the automobile industry are scheduled to appear on Tuesday before the House Energy and Commerce Committee, where they will be asked how soon the millions of vehicles that have been declared defective can be repaired, and why it took so long to recall them in the first place.

“What concerns me today are multiyear safety investigations where we can identify a problem but a solution is nowhere in sight; where the preferred approaches are Band-Aids instead of an effective cure,” said Representative Fred Upton, the Republican from Michigan who is chairman of the committee.

“This technology is truly rocket science,” he said. “But you don’t need to be a rocket scientist to see that more needs to be done and that it should have been done sooner. When lives are put in jeopardy, delay is deadly.”

Takata has used ammonium nitrate in its propellant since the early 2000s. The compound burns rapidly to create gases that inflate an airbag in milliseconds. But according to experts, it is highly sensitive to temperature changes and moisture, and can break down over time. And when it breaks down, it can combust violently, experts say.

Former Takata engineers told The New York Times last year that the airbag manufacturer adopted ammonium nitrate, which is widely and cheaply available, despite concerns over the safety of its use in airbags. Last month, the company acknowledged that the compound could degrade over time in certain conditions, putting it at risk of “overaggressive combustion.”

Takata has said that the ammonium nitrate it uses, which is pressed into wafers, has been stabilized to make it safe for use. Still, Takata said an analysis of the violent airbag ruptures showed that the majority of cases involved a certain type of batwing-shaped propellant wafer.

There have been a total of 67 reported instances in the United States of such “field ruptures” involving batwing propellant wafers. Fifty-eight of those ruptures occurred in vehicles that were already subject to recalls involving the propellant wafers, the airbag maker said.

Those results contributed to Takata’s decision to stop manufacturing inflaters with the batwing-shaped propellant, the company said. But Takata maintains that it still has not pinned down a definitive root cause of the ruptures.

The problems with the airbags date to almost 15 years ago when drivers began lodging complaints about them with federal regulators. In November, The Times reported that Takata had ordered tests on the airbags in 2004 and found signs of defects, but did not convey the results to the regulators. Takata has disputed that report.

The first recall for the airbag issue came in November 2008 when Honda recalled 4,205 vehicles, a small number, with the Takata products. The company recalled an additional 510,000 cars six months later after a teenager was killed by an exploding airbag.

Those two recalls prompted regulators at the National Highway Traffic Safety Administration to open an investigation in 2009 into the two companies’ handling of the defect. Six months later, it closed the investigation without requiring that Takata turn over all of the documents that had been requested.

In the document officially closing the inquiry, the agency wrote that there was “insufficient information to suggest that Honda failed to make timely defect decisions on information it was provided.”

“There are no additional vehicles to be investigated,” the agency said. Less than a year later, after more airbags exploded in the field, Honda started to recall more cars.

As the number of recalled cars mushroomed, the safety agency started a second investigation into the airbags last June and, last winter, began to demand that automakers issue nationwide recalls in the United States.

According to Mr. Kennedy’s testimony, Takata has significantly increased its production of replacement airbag kits — from about 350,000 a month in December to about 700,000 last month. He added that the company expected to produce one million a month by September.

The company has been working with other airbag suppliers in order to meet anticipated demand and, according to the testimony, half of the kits shipped to automakers in May contained airbag inflaters made by Takata competitors. Mr. Kennedy said that the company expected that share to rise to about 70 percent by the end of the year.

Still, consumers have been facing delays in repairing their cars and many have just learned of the airbag problems, despite recalls that have been in place for months.

Kayla Jenkins, of Springfield, Mo., said she saw the news about the Takata recall two weeks ago and, when she checked the vehicle identification number on her 2002 Honda Civic, was surprised and frustrated to learn for the first time that it was affected by three outstanding recalls, two of which were related to the airbag defect.

“No one had contacted me,” said Ms. Jenkins, 22, who said she bought her car used about three years ago. And after reading about a woman with the same model car who was brutally injured by an exploding airbag, she said she might not want to wait to get it fixed.

“I am definitely freaked out,” Ms. Jenkins said. “I am going to be looking into a new car A.S.A.P.”

Automakers are still determining which cars are affected by the expanded recall, a process that could take several weeks. It is unclear how the 34 million vehicles will break down by manufacturer.

Gordon Trowbridge, a spokesman for the National Highway Traffic Safety Administration, said there were a number of reasons there might be some mismatch of what Takata reports and what automakers report. For instance, some vehicles could be subject to recalls for both the driver and passenger airbags, and in those cases, they may be counted twice in Takata’s tally. The same may be true for cars that were repaired under previous recalls but need to be fixed again.

“These numbers regularly change, up and down, as automakers refine their understanding of what vehicles are still registered, and where,” Mr. Trowbridge said. “So, with any recall, there is some imprecision in the numbers, especially at this stage.”