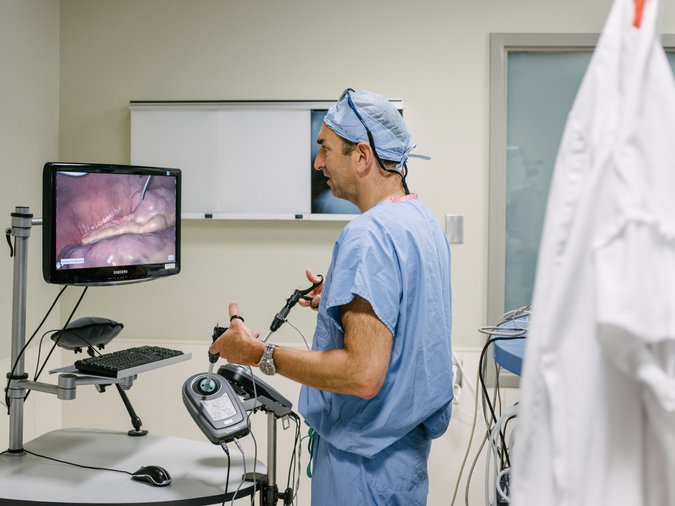 For more than 100 years, the standard treatment for appendicitis has been surgery. Now a large Finnish study provides the best evidence to date that most patients can be treated with antibiotics alone.

The study, published Tuesday in JAMA, the Journal of the American Medical Association, involved 530 patients aged 18 to 60 who agreed to have their treatment — antibiotics or surgery — decided at random.

Three out of four who took antibiotics recovered easily, the researchers found: the pain vanished, and they went on with their lives. And none who had surgery after taking antibiotics was worse off for having waited.

“The time has come to consider abandoning routine appendectomy for patients with uncomplicated appendicitis, ” Dr. Edward H. Livingston, a surgeon and editor at the journal, who was not involved with the study, wrote in an editorial accompanying the report.

The study comes amid growing questions about the routine use of surgery to treat appendicitis, which strikes about 300,000 Americans a year, afflicting one out of 10 adults at some point in their lives.

The new results only apply to uncomplicated appendicitis, stressed Dr. Paulina Salminen, a surgeon at Turku University Hospital in Finland and lead author of the new study. She and her colleagues excluded the 20 percent of patients with complicated cases — people with perforated appendices or abdominal abscesses, and those with a little, rock-like blockage of the appendix called an appendicolith.

To distinguish the complicated from the uncomplicated cases, the Finnish doctors used CT scans, which, Dr. Livingston said, are “almost perfect for diagnosis.”

But Dr. Philip S. Barie, a surgeon at Weill Cornell Medical College, noted that antibiotics were not sufficient for more than a quarter of the patients in the new study and said the failure rate was unacceptable.

Patients should have the simple and safe operation to remove their appendix, he said, taking care of the problem quickly and permanently.

Dr. Livingston disagreed. When he saw the results, he said in an interview, his first thought was, “Wow. I’ve been waiting for this.”

Dr. Livingston began wondering about the role of surgery 10 years ago when he operated on a young man with appendicitis who experienced a rocky recovery. The case prompted him to review the medical literature.

He found that much of the original research was done by a surgeon, Dr. Reginald H. Fitz, who in 1886 investigated why people die from pelvic infections.

Dr. Fitz looked at autopsy reports and found many patients whose appendices had been inflamed. That led him to conclude that the appendix may become injured, then infected, then gangrenous; finally, he theorized, a lethal infection spreads through the pelvis.

The way to prevent this dire chain of events, Dr. Fitz decided, was to remove the appendix. But more recent research has shown that the infected appendix does not become “gangrenous,” and, as even Dr. Fitz noticed, some patients simply get better on their own.

In the 1950s, soon after antibiotics were discovered, some doctors reported success using them to treat patients with appendicitis. But, Dr. Livingston wrote in his editorial, “So powerful is the perceived benefit of appendectomy for appendicitis that surgical treatment for appendicitis remains unquestioned, with seemingly little interest in studying the problem.”

Dr. Livingston also found that most appendices that perforate have already done so by the time the patient shows up at an emergency room. Those that have not perforated when the patient seeks medical help almost never do so.

People with so-called uncomplicated appendicitis, he concluded, seem to have a different disease — one that can be treated with antibiotics.

“The reason we take the appendix out and do it as an emergency is the belief, dating back to 1886, that the appendix will eventually become gangrenous and cause a pelvic abscess,” said Dr. Livingston.

Even with the results of the Finnish study, many questions remain.

She added that although that was “a weakness” of the study, most of the surgical complications were from infections at the site of the incision, which could occur with laparascopy too.

Dr. Barie said the decision not to employ laparoscopic surgery, which tends to be safer than open surgery, flawed the study’s results.

The researchers also decided to give the patients taking antibiotics three days of intravenous drugs in the hospital, followed by a week of antibiotic pills at home. That, Dr. Salminen admits, probably was more than was needed.

Many patients begged to get out of the hospital after a day, she said. Some just left on their own, saying they felt good and saw no need to stay.

An American group is planning to a clinical trial, similar to the Finnish study, but comparing laparoscopic surgery and a less powerful antibiotic, given either as an injection followed by pills or as a one-day intravenous infusion followed by pills.

A person who has had one episode of appendicitis is at higher than usual risk for another. The American team will also try to assess whether these patients are more likely to rush to the emergency room for a CT scan each time they experience mild abdominal symptoms.

Conceiveably, it could cost the medical system more in the end to keep scanning and perhaps treating these people than to simply remove their appendix with laparoscopic surgery during their initial bout with appendicitis.

“Obviously, you can treat appendicitis with an antibiotic,” said Dr. David Flum, a surgeon at the University of Washington who will be a principal investigator in that study. “But from a patient’s point of view, should you?”