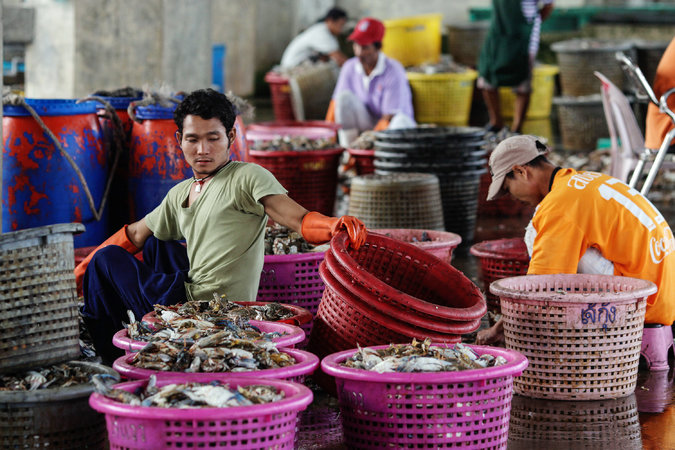 FRANKFURT — A Burmese migrant worker is sold by traffickers as a slave to the owner of a Thai fishing boat. The catch of the boat is used to make fish meal to feed farmed shrimp. The shrimp wind up in supermarkets in the United States and Europe.

Issues of security and economics tend to attract the most attention at Group of 7 meetings. But when President Obama and other leaders of the nations in the group meet at the Bavarian spa resort of Schloss Elmau on June 7 and 8, one of the items on the agenda will be related to those Thai shrimp.

The leaders plan to discuss so-called supply chain standards — ways of ensuring that everyday products like food, electronics and jewelry do not come packaged with human misery as a hidden ingredient.

Abuses in the Thai fishing industry have been well documented and were the subject of hearings in the United States Congress in April. The Group of 7 countries — Britain, Canada, France, Germany, Italy, Japan and the United States — represent 45 percent of global economic output, which gives them considerable power to push for better working conditions not only for Thai fishing crews but also for miners in Democratic Republic of Congo and textile workers in Bangladesh.

The urgency was underlined on May 14 after at least 72 workers died in a fire that consumed a factory near Manila that made rubber sandals and slippers. The products were made for local markets, according to news reports, but the events showed the potentially deadly consequences of unsafe working conditions.

No producer wants to be excluded from markets in the Group of 7. While the gathering of wealthy nations is known more for bland communiqués than bold initiatives, even a statement of resolve on supply chain standards would be welcome, watchdog groups say.

“We would love to see the G-7 leaders make a strong commitment to this,” said Sophia Pickles, a senior campaigner at Global Witness, an advocacy group. “It would be an important signal.”

The United States and other countries already have rules designed to ensure that imported products are not contributing to human rights abuses or environmental damage. Dodd-Frank, the American law designed to address the financial crisis, has a provision requiring companies to disclose if they were using minerals like tungsten and gold exported illegally from the Democratic Republic of Congo or neighboring countries.

But watchdogs say the wealthy nations need to do more to ensure that existing rules are more rigorously enforced.

“Governments really need to start closing the door to illegally produced products,” said Jason Clay, a senior vice president at the World Wildlife Fund, which has pushed for improved scrutiny of timber and of other products that are often harvested in developing countries and exported to rich ones.

Perhaps surprisingly, some corporations have been moving faster than governments to scrutinize where their products come from and to ensure they are not tainted, Mr. Clay said. The collapse of a building in Rana Plaza in Bangladesh in 2013, in which more than 1,100 textile workers were killed, demonstrated to retailers like Walmart how their own reputations and sales could be at risk from unscrupulous suppliers.

Walmart denied reports that one of its suppliers had purchased jeans made by a company at the Rana Plaza complex. But Walmart has stepped up scrutiny of its supply chain and contributed to a fund for victims of the disaster.

“Even in the height of recession, companies were investing in sustainability because they knew their futures depended on it,” Mr. Clay said. “We don’t see that commitment from governments. They have trouble managing their own piece of the planet.”

“The rich industrial countries need to establish fundamental standards worldwide, so that these will be adopted by others,” said Gerd Müller, the German minister for economic cooperation and development.

The European Commission is considering a proposal that would encourage companies to scrutinize whether minerals they use are coming from conflict areas. There are already similar rules in place that apply to timber and diamonds.

Global Witness and other nongovernmental organizations have complained, though, that the European proposal calls for voluntary rather than mandatory compliance. Companies such as mobile phone manufacturers would be certified as a European Union “responsible importer” if they documented that raw materials they were purchasing were not being used to help finance armed conflict. But there would be no legal obligation for them to do so.

“The commission’s proposal is from our point of view extremely weak,” said Michael Gibb, a campaign leader at Global Witness in London who specializes in so-called conflict resources. Although Germany pushed to put supply chains on the agenda, he said, it is one of the countries that has resisted mandatory rules.

Others say that voluntary rules are easier to steer through the political process and potentially just as effective.

A strong statement from the wealthy countries at the summit meeting would have a powerful effect on the developing countries that are the main suppliers, said Mr. Müller, the German development minister.

He noted that voluntary rules were more practical. “You can’t change world trade overnight with regulations,” he said. “What is decisive is that the industrial countries commit themselves to sustainable standards.”

Gabriela Ramos, chief of staff at the Organization for Economic Cooperation and Development and the person responsible for summit meeting preparations, said that reaching agreement on common supply chain standards would be significant.

“It’s important for the G-7 to be leading by example,” Ms. Ramos said. “Sometimes you need to make progress in any way you can. Of course we would like to make everything obligatory. International law is more complicated than that.”