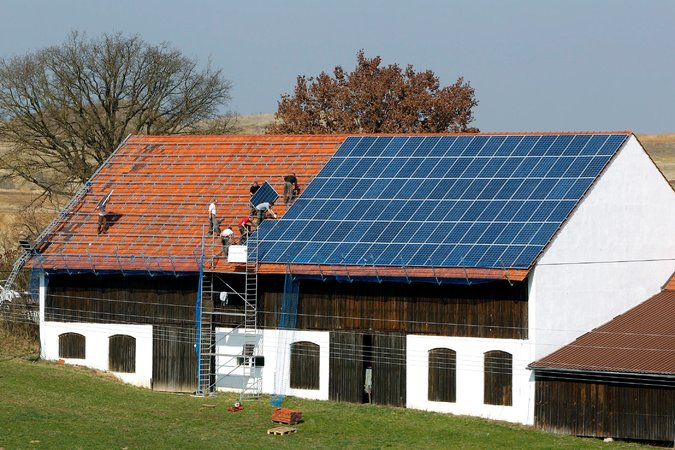 BERLIN — Germany has enthusiastically embraced the sun as an important source of energy, but a strange celestial trifecta on Friday evoked a shiver of ancient fears — and the more practical concern that the lights might go out.

For astronomers, it was an opportunity to witness a cosmic coincidence involving a solar eclipse, a supermoon and the spring equinox. Solar eclipses are rare — the next one will not occur until 2026 — and a supermoon can be as much as 12 percent bigger and 30 percent brighter than an average full moon.

Yet Europe’s increasing reliance on solar energy made it a day of terrestrial anxiety for utilities. The authorities were concerned enough that they added to the usual list of eclipse precautions, just in case.

Besides advising the use of special glasses or a projector of paper and aluminum foil to avoid looking directly at the eclipse, they recommended having a battery-powered radio and enough food to last through possible power failures.

“Keep in mind that in addition to the wonderful spectacle, the high proportion of photovoltaic generators poses a major challenge to the management of the electric grid in Europe, as well as Germany,” Germany’s federal office of civil protection and disaster assistance warned.

From about 9:30 a.m. to noon, the moon was to slide across the sun and cast a partial shadow across much of Europe, nearly blocking out sunlight. Such solar eclipses, though rare, are usually uneventful.

Grid operators, of course, have to take into account the rising and setting of the sun every day. What made the eclipse a challenge was the speed at which the energy generated by solar panels was expected to drop and then rise again, at a time of day when demand was high, said Bruno Burger, a solar energy researcher for the Fraunhofer Institute.

“It is above all the sharp return that is causing headaches for the grid operators,” Mr. Burger said. “It will be the equivalent of a sunrise, but three times as fast.”

The eclipse began over the far reaches of the northern Atlantic Ocean and continued for a couple of minutes in a tight arc.

Solar eclipses were once thought to be a sign of divine anger. Herodotus said an eclipse even halted a battle. These days, Europe depends more and more on the sun for renewable energy, drawing from some 1.4 million solar installations in Germany alone to keep lamps lit and power supplied to industrial giants like Daimler and Siemens.

The sharp drop in sunlight caused by the eclipse was expected to trigger a fluctuation of energy levels equivalent to that of shutting off 12 power plants at once, only to have a surge that amounted to the power generated by 19 plants switched back on.

Grid operators in Germany and across Europe have been preparing for months, running simulations and exploring backup plans.

In Germany, some saw the eclipse as an opportunity to test the capabilities of the power system, as the country pushes ahead with its goal to generate 80 percent of its energy needs from renewable sources. Last year, almost 26 percent of all electricity in Germany came from renewable power.

Patrick Graichen, who heads Agora Energiewende, a policy institute in Berlin, said the eclipse provided a natural simulation of challenges that could be faced by an energy sector far more reliant on sunshine and wind.

“If today’s relatively inflexible power system can cope with the eclipse, the power system of 2030 will deal with similar situations easily,” Mr. Graichen said in a statement. “For a successful energy transition in Germany, the power system will have to become more flexible anyway.”