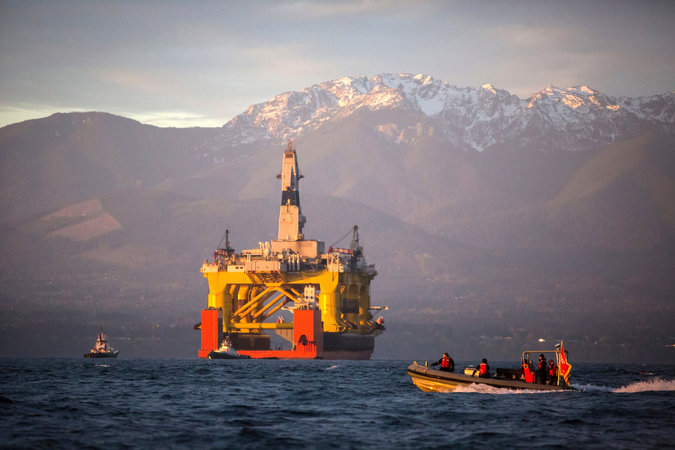 When the Obama administration announced on Monday that it would let Shell drill for oil off the Alaskan coast this year if it met certain conditions, environmentalists were outraged — not just by the administration’s decision to allow drilling, but by its decision to give Shell, in particular, the green light.

They said that the company’s track record in the Arctic should rule out another chance for it. Shell tried to drill in the Arctic in 2012, and the company’s multibillion-dollar drilling rig, the Kulluk, ran aground. The operator of a drill ship hired by Shell also pleaded guilty to eight felony offenses and agreed to pay $12.2 million over shoddy record-keeping that covered up hazardous conditions and jury-rigged equipment that discharged polluted water.

“Shell has already proven itself not up to the challenge of development in the Arctic Ocean,” said Franz Matzner, the director of the Beyond Oil Initiative at the Natural Resources Defense Council. “But it’s not just Shell. The fact is, there’s no safe way to pursue oil exploration in the frozen wastes of the Arctic Ocean.”

He added, “This is an inexplicable decision to do something that is dirty, dangerous and unnecessary.”

Shell, Europe’s leading oil company, has spent about $7 billion in the Alaskan Arctic over the last decade, and drilled two shallow wells during the 2012 attempt.

But the federal government did not allow the company to reach the deeper oil-bearing formations because the containment dome designed to cap a runaway well had been destroyed in testing.

Shell executives said they had shaken up their Alaska team, putting in new management that would emphasize better management of contractors, readiness for any problems and contingency plans to care for any accidents.

“The program has been fortified by new assets, an increased number of vessels, but most notably a new drilling rig,” said Curtis Smith, a company spokesman, adding that Shell had revamped its management of contractors.

“It’s our view we put together the most environmentally sensitive, technically sound Arctic program ever assembled,” he said, “and if we didn’t have confidence in it, we wouldn’t execute it, even if we had all the permits.”

At a news conference in Houston last month, Interior Secretary Sally Jewell expressed confidence in the company’s new plan, saying, “There is no question Shell learned expensive, painful lessons about contractors and safety.” She also said that Shell had improved its containment plans in case of a spill.

Such statements hardly satisfy environmentalists, however. Even some competing oil company executives openly wonder why Shell is trying again.

“It’s too complicated,” Claudio Descalzi, the chief executive of the Italian oil company Eni, said in a recent interview. The company allowed its lease in Alaska’s Chukchi Sea to expire without drilling. “Everything that is too complicated is too expensive and too risky — and my job is to reduce risk,” he said.

Patrick Pouyanné, the chief executive of Total, a French oil giant that produces natural gas in the Russian Arctic, also expressed doubts about drilling for oil in the Alaskan Arctic with prices virtually cut in half in recent months.

“At $50 a barrel, it does not make any sense,” he said in an interview. “These are high-cost resources.” He added that a spill “could be very detrimental for the reputation of a company.”

Climate scientists have said for years that global warming would open stretches of the Arctic Ocean to shipping and drilling. And the Alaskan Arctic is one of the great untapped frontiers for offshore drilling in the United States, with the potential to produce up to a million barrels a day, or more than 10 percent of current domestic production, according to industry estimates.

But many experts warn that Arctic Ocean oil exploration involves high costs and enormous risks. An Arctic oil spill would have none of the conditions that helped mitigate effects of the 2010 Deepwater Horizon spill, including warm water, sunlight, relatively calm weather and ready access to cleanup and rescue equipment.

President Obama’s commission on the Deepwater Horizon explosion and spill warned in its comprehensive report against rushing into the offshore Arctic.

While the sea depths and oil reservoir pressure are likely to present fewer challenges to extraction than conditions found in the deepwater wells of the Gulf of Mexico, the authors wrote, the fierce weather conditions and likely long life of any spilled oil — along with the expected difficulty of mopping up spills and the effects on the environment — all mean that getting oil out of the oceans off Alaska “requires the utmost care.”

A research letter published in January in the journal Nature suggested that, under the international voluntary target of keeping a global temperature rise to 3.6 degrees Fahrenheit (2 degrees Celsius) to avert some of the worst outcomes of climate change, “all Arctic resources should be considered as unburnable.”

Christophe McGlade, a research associate at University College London and an author of the paper, said that the costs and risks of Arctic reserves were too high, especially if climate regulations reduced the demand for fossil fuels in general. Oil and gas needs could then be met with more economical methods of recovery, including hydraulic fracturing.

“We struggle to see how Shell could make a profit for shareholders at the lower oil prices we’re seeing today,” he said. “They are like a dog with a bone,” he added; having spent billions, “they’re unable to let go of it.”

Mr. Smith, the Shell spokesman, said, “We take a long-term view of price and energy supplies.”