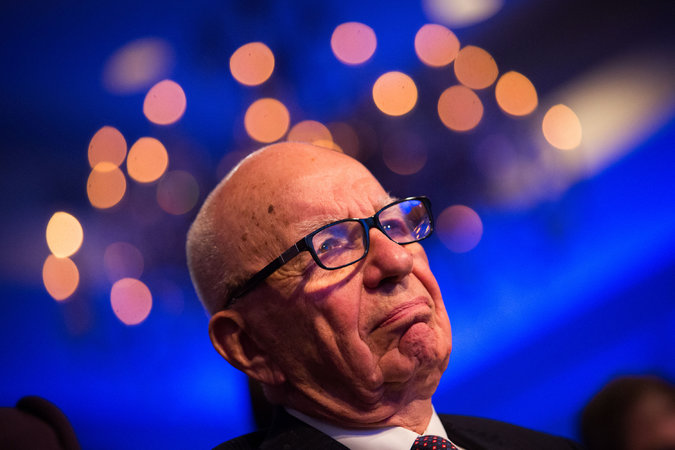 Rupert Murdoch’s long-held plan to hand over his media empire to his sons is now being realized.

Mr. Murdoch is expected to name his son James to succeed him as chief executive of 21st Century Fox, the sprawling entertainment company that includes cable and broadcast television networks, film studios and satellite companies, multiple people briefed on the plans said on Thursday.

He also is expected to elevate his son Lachlan to the role of co-executive chairman of the company. Lachlan, 43, is moving from Australia to Los Angeles and will work in partnership with James, 42, these people said.

Rupert, 84, will remain at the company as executive chairman.

The exact timing for the changes is unclear. They are said to be part of Rupert’s long-term succession plans and are likely to be discussed at a board meeting next week, two people said.

While his sons are stepping into the spotlight, Rupert is expected to continue to provide broad strategic oversight and will retain ultimate control of the company, said the two people. The family effectively controls both 21st Century Fox and News Corporation, the other half of the Murdoch media empire, through its ownership of almost 40 percent of the voting shares in both companies. Rupert Murdoch has more rights in the family trust than his children.

He is not ill, still appears energized and is expected to come into the office regularly, they said. The people who spoke of the plans spoke on the condition of anonymity so as to discuss private company matters.

“This is still Murdoch’s company at the end of the day,” said Rich Greenfield, a media analyst with BTIG Research.

As part of the reorganization, Chase Carey will step down from his role as chief operating officer at Fox and work as an adviser to the company. Mr. Carey, who has worked as the second-highest executive at Fox since 2009 and is widely respected on Wall Street, played an integral role in the succession plans, one person said. To ease the transition, he built flexibility into his contract with Fox last year, when he agreed to a two-year contract extension through June 30, 2016.

Still, another person with knowledge of the situation said that tensions could arise over which son would ultimately succeed their father, and even perhaps whether one would end up at 21st Century Fox, a lucrative business, and one at News Corporation, which faces the same headwinds as other traditional journalism companies. Thursday’s developments do not affect the hierarchy at News Corp.

No imminent changes are expected at Fox News, which is a big revenue producer for the company and whose chief, Roger Ailes, has clashed in the past with Lachlan. Mr. Ailes, chairman of Fox News, will continue to report to Rupert, one person briefed on the plans said.

The moves, first reported Thursday by CNBC, were largely expected on Wall Street and Fox shares ended flat on Thursday.

The company, for its part, said it had nothing to announce. “The matter of succession is on the agenda at our upcoming, regularly scheduled board meeting,” Nathaniel Brown, a Fox spokesman, said in a statement.

James and Lachlan are ascending to the top of Fox at a time of rapid change on the media landscape. This might be their father’s company — started in 1954 with a single Australian newspaper — but the industry is transforming, and the brothers will have to navigate a complicated new world of digital distribution and advertising technologies in the years to come.

Media executives and analysts describe James as a seasoned executive who has the experience of operating media companies in different countries while also providing a fresher, younger perspective on the business. They pointed to his role in encouraging his father to take a stake in Vice, the brash young media company, and acquire TrueX, an advertising technology company.

“His strength comes out in exactly the environment we face today and exactly the changes that we face in the ecosystem,” said David Bank, a media analyst at RBC Capital Markets.

News of the appointments was not a surprise to executives inside and outside the company, who said that the succession plans have been in the works for a while and publicly discussed. Analysts said that the change could lead the company to alter its strategic approach. One big question is whether it will become more active in deal making, given that it is sitting on about $9 billion in cash. Last year 21st Century Fox made an unsuccessful bid to acquire Time Warner. Some executives close to James predicted that he would continue to seek deals big and small.

Another focus is what the company will do with its minority stakes in the online streaming service Hulu and the telecommunications group Sky.

The moves are the latest in a series of incremental steps by Rupert to ensure that his companies — publicly traded, with a combined market capitalization of nearly $80 billion — are handed over to his children. That prospect seemed remote, if not impossible, a few years ago, when James was tainted by the phone hacking scandal in Britain that engulfed the company while he oversaw the companies there.

He and his father were called before Parliament to answer grueling questions and discuss embarrassing emails related to the scandal. James soon departed London for New York in an effort, those close to him said, to distance himself from the fallout and rebuild his reputation.

Lachlan decided in 2005 to leave his position as chief operating officer of News Corp., which at the time encompassed all of Rupert’s holdings, after clashes with other executives. It was viewed, perhaps by all but his father, as a rejection of the leadership role for which he was being groomed.

But Rupert worked over the years to bring Lachlan back to the businesses. Last year Rupert named Lachlan nonexecutive co-chairman of News Corp. and 21st Century Fox, while elevating James to co-chief operating officer of 21st Century Fox.

Their sister Elisabeth maintains her position in the trust but is not involved in the business, one person said.

James dropped out of Harvard in 1995 to start an independent music label, Rawkus Records. He subsequently moved to the family business and was widely praised for turning British Sky Broadcasting, the satellite television company, into a broader communications company.

He has long been focused on assets other than the print holdings that his father holds so dear. In addition to pushing the acquisitions of Vice and TrueX, he was often seen on 21st Century Fox’s Century City lot in California.

“James is not a caretaker,” said Jonathan Miller, a venture capitalist and former News Corp. executive. “He is a mover and a shaker.”