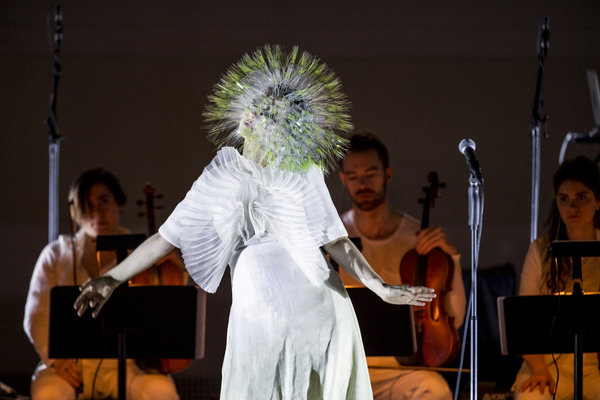 The one indelible moment in “Björk” — a worshipful retrospective at the Museum of Modern Art, which has met with something other than critical approval — happens in “Black Lake,” a sound and video installation commissioned for the show. Björk is depicted alone, in a stark Icelandic landscape, furiously pounding a fist against her chest. She seems riven with despair, possibly trying to jolt her heart back into its rhythm, as unseen strings sustain a restive chord for an eternal half-minute or so.

At Carnegie Hall on Saturday afternoon — in her first of seven New York City concerts over the next month, and the kickoff to a world tour — Björk imbued her performance of “Black Lake” with a subtler semaphore. Reaching that point in the song, she clasped her hands at her clavicle, as if grasping for composure. The chord, played by members of Alarm Will Sound, became a ghostly ellipsis, hanging heavy and impassive in the air.

Heartbreak has been the overwhelming subject for Björk in recent months, as she readied and released her emotionally raw new album, “Vulnicura” (One Little Indian).

Coming after the end of her longtime union with the artist Matthew Barney, it is her report from the epicenter of a recent devastation, issued in a spirit of elegy as well as rebuke.

She devoted the first half of this concert to material from “Vulnicura,” wearing a white gown and a face-obscuring headgear that evoked the armory of a sea urchin, or the halo of an icon in a Byzantine painting. Her presence was expressive but restrained, nearly as deliberate as the tempos of the songs. “Is there a place,” she sang bleakly at the outset of “Family,” a dirge, “Where I can pay respects / For the death of my family?”

As a songwriter, Björk has always found ways of melding the mythic and prosaic, and some of these songs strike a precarious note of pathos that few other singers could pull off. With her phrasing, which ranged from terse formality to a flowing swoon, she illuminated the harrowing beauty of “Stonemilker” — an overture that makes devastating use of the unlikely phrase “I wish to synchronize our feelings.” She elicited similar depth from the exasperated “Lionsong,” and from the gravely determined “Notget,” which ended the first half in a martial clamor, electronics rumbling through the hall.

Björk had the ideal accompaniment in Arca, the Venezuelan producer-engineer who helped shape the new album; Manu Delago, an expressive percussionist, often playing electronic pads; and a 15-piece string section from the ranks of Alarm Will Sound, the new-music chamber orchestra. Whether the music thundered or shimmered, her clarion voice shone through: strong testament to a brilliant sound mix in a challenging room.

The second half, warmer and looser than the first, featured Björk with her hair down, in a dress whose filmy cape flowed about her as she danced. But the repertory, chosen from a discography stretching back more than 20 years, still felt tailored to the occasion.

She offered embattled succor in “Come to Me,” and a guarded sort of bliss in “Pleasure Is All Mine.” There was pain as well as reassurance in “Undo,” from the 2001 album “Vespertine,” which now stands as something like the negative image of “Vulnicura.”

And “Wanderlust,” from the 2008 album “Volta,” was a tour de force, the cathartic turn in the concert when Björk fully opened the throttle on her voice. It happened most in the chorus, which included this command: “Peel off the layers / Until you get to the core.”

A similar idea appears in “Black Lake,” during the song’s redemptive final stretch, when Björk compares herself to a rocket re-entering the atmosphere. “I burn off, layer by layer,” she sang, hinting at an emotional purification and renewal.

Björk hinted at that process elsewhere in the show, usually with premeditated care. But she also seemed taken by surprise at least once — on “Mouth Mantra,” which begins as a catalog of injuries but comes to the phrase “I was not hurt.”

As she sang those words, Björk executed a half-bow, arms spread wide, and was met with supportive applause. She flashed a startled, grateful smile, before suiting up to dig back into the song.