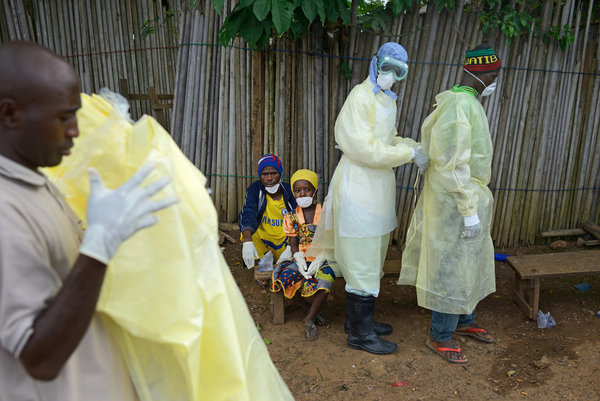 Red Cross volunteers helping to safely bury people who die of Ebola in Guinea have been attacked in recent days by people attending the funerals, complicating efforts to stop the spread of the disease.

The International Federation of Red Cross and Red Crescent Societies reported Thursday that since March, the organization’s burial teams in Guinea have been attacked verbally or physically 10 times a month on average. Most recently, on Sunday in Forécariah, two volunteers were beaten as they tried to carry out a safe burial.

One volunteer, Toupou Lopou, 22, said violence erupted when the burial team tried to take a blood sample from the deceased woman for testing. Ms. Lopou, who spoke by phone from Conakry, the Guinean capital, said people began throwing stones and she was hit in the arm, fell and was trampled by angry people attending the funeral.

Yann Bonzon, head of the Guinean delegation of the International Committee of the Red Cross, said that in communities affected early in the outbreak there, tensions have subsided and people are cooperating with the health authorities to protect themselves from infection. But other regions are only seeing Ebola cases now, and some communities are reacting with suspicion.

Resistance “is evolving from one region to another region, and it’s following the virus,” Mr. Bonzon said. In newly infected areas, people are whispering rumors that have been extinguished elsewhere, saying, for example, that “the Red Cross is spraying Ebola into the schools,” he said.

Brice de le Vigne, director of operations for the Ebola response of Doctors Without Borders, said his organization’s workers had also been stoned recently in Guinea. “If you compare Liberia and Guinea, Liberia had a huge explosion of cases in July and August — it basically paralyzed the entire health system,” Mr. de le Vigne said. “This never happened in Guinea. It was always a kind of peak, but then it would go down, up and down. Guinea never reached such a high explosion at once. One explanation could be that because it was not so many cases at once, somehow the population in some areas never realized the dangerousness of Ebola.”

The number of new cases in West Africa has increased for the second week after having dropped steadily since the beginning of the year, the World Health Organization has reported. In Guinea, cases have increased for three consecutive weeks. In the first week of February, Guinea reported 65 of the region’s total 144 new cases — up from 39 cases the week before. Even more concerning, only about a sixth of recent cases have been among people that health officials were monitoring because they were known to have come in close contact with Ebola patients.

“That means cases are arriving without any clear idea of how the transmission occurred,” said Dr. Margaret Harris, a spokeswoman for the World Health Organization’s Ebola response. “It means underground transmission chains, potentially unsafe burials.”

“In Guinea we’ve had more violent incidents,” she said. The most recent W.H.O. report said that in the first week of February about a third of districts with Ebola cases reported “at least one security incident.”

Dr. Harris said that in the western part of the country that is newer to the outbreak, there is still “disbelief that Ebola’s real,” and “you get quite a number of cases around unsafe burials because they happen in secret, and then a large number of people do the things that put them at risk.”