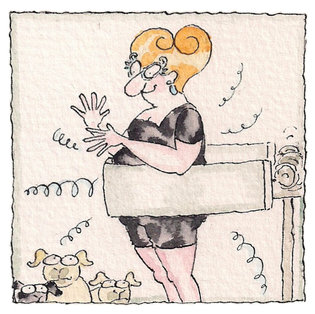 Q. Did those old exercise machines that quickly oscillated a belt around the midsection have any fat-burning benefits?

A. In a word, no, though some modern studies indicate that gentle full-body vibration has some other health benefits.

For the flab-flapping belts, the underlying theory was apparently that the vigorous mechanical massage would break down fat cells for removal by the bloodstream or lymphatic circulation, or that it would simply tone the flabby area.

These and other elaborate passive-exercise machines were the descendants of equipment for both active and passive exercise developed by a Swedish doctor, Gustav Zander, who introduced them to Americans at the 1876 Centennial Exhibition in Philadelphia. Some of his devices resemble the tension-based machines used in modern health clubs.

The vibrating belts enjoyed their greatest popularity from the 1930s to the 1960s, but no formal scientific studies proved any weight-loss or muscle-toning benefits.

One study of low-magnitude vibration involved overweight mice. The results, reported in 2012 in The Journal of the Federation of American Societies for Experimental Biology, showed improved bone strength and more immune cells, but not weight loss.