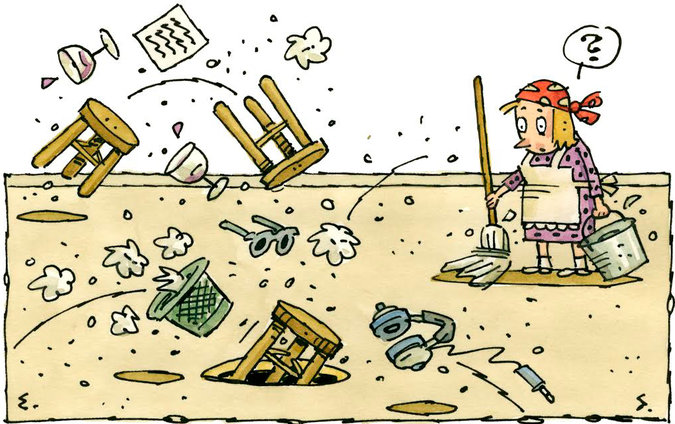 Thick cables snaked across the floor of the Hall of the Universe one recent evening. Not far from a 10-foot-tall pitted tooth of iron known as the Willamette Meteorite, a semicircle of cafe tables was set up.

In the corner, behind tables holding video and computer equipment, was a bar and buffet. Holding court in the center of the crowd, in a blazer and bluejeans and a tie garishly illustrated with astronomical images, was Neil deGrasse Tyson, the ebullient director of the Hayden Planetarium at the American Museum of Natural History in New York City — or, as he likes to describe himself to audiences, “your personal astrophysicist.”

The blogosphere was going crazy, he declared, looming over me and grabbing my shoulders. “They’re saying Neil is going to take over late-night TV,” he laughed. He said he had been approached to go on Conan O’Brien’s show, where a year ago he had enthused about dying in a black hole and pointed out that everything about a crescent moon that hangs over the city on the show’s set was wrong.

The occasion, in the museum’s Rose Center for Earth and Space, was the taping of a couple of episodes of Dr. Tyson’s new television show, “StarTalk.” Based on the long-running radio show and podcast of the same name, now in its seventh season, it is billed as the first science-based TV talk show. Or as Helen Matsos, a NASA astrobiologist and “StarTalk” producer, put it, “The Daily Show” meets “Car Talk” meets “Cosmos.”

The last time we saw him in prime time, last spring, Dr. Tyson was flying around the universe on a letter-opener-shaped spaceship as the host of the born-again “Cosmos,” slipping on sunglasses with a sly smile to experience the Big Bang. For those who have relished Dr. Tyson in a more spontaneous mode, holding forth as a guest of Bill Maher or Jay Leno or needling his fellow physicists during debates at the museum, this is a chance to see him at his unscripted best.

This was the second in a series of tapings for shows that will start on the National Geographic Channel in April. About 30 people, mostly museum employees, had been invited to eat, drink and applaud enthusiastically as the live audience.

At tapings of prime-time shows like “The Big Bang Theory,” there is a person in charge of keeping the audience warmed up and excited during breaks in the action.

On “StarTalk,” the warmer-upper is Dr. Tyson himself, who began by teasing a reporter in the first row for being the only one not wearing black. He ruminated on the movies. Until recently, he said, most sci-fi films were “people go into space and something goes wrong.”

But sitcoms like “The Big Bang Theory” and movies like “The Theory of Everything“ and “The Imitation Game,” both nominated for multiple Academy Awards, have opened “a new portal,” Dr. Tyson said. In “Interstellar,” he noted, five major stars play scientists who do not endanger civilization, but save it.

Soon Dr. Tyson and his guests, Janna Levin, a cosmologist, novelist and professor at Barnard College, and Eugene Mirman, a comedian in the animated series “Bob’s Burgers” and a frequent wingman on the “Star Talk” podcast, were perched on stools. We applauded wildly as Dr. Tyson wound up his opening pitch. “StarTalk,” he intoned in a deep voice, “where science and popular culture collide.”

The subject was black holes, the Einsteinian monsters from which not even light can escape and which form the centerpiece of “Interstellar,” Christopher Nolan’s epic movie about astronauts who travel through a wormhole to another galaxy in search of a new home for humanity.

Why is the entrance to a black hole called a throat? Dr. Tyson wondered at one point. “It’s creepy.”

The conversation was interspersed with clips from an interview with Mr. Nolan, shown on a bank of screens usually used to present images like Hubble Space Telescope pictures to museumgoers.

During another break, Dr. Tyson recalled that he had written a rhyme about black holes. He started to recite it: “In a feet-first dive to this cosmic abyss...”

And then he scrunched his face in agony. “I forgot the last stanza.”

He tried again, and could not remember it. The show went on.

Along the way, two wine glasses minding their own business at the feet of those stools were smashed.

By the time Dr. Tyson had wrapped the first episode, someone had fetched the poem, “Death by Black Hole,” from Google. Dr. Tyson tried again, then again with rhythm as the audience members snapped their fingers in time:

In a feet-first dive

To this cosmic abyss

You will not survive

Because you surely will not miss

Are you sure you wanna go?

The singularity will eat ’em, and of course, you won’t be having fun.

Then it was time for selfies, and for sweeping up the broken glass.