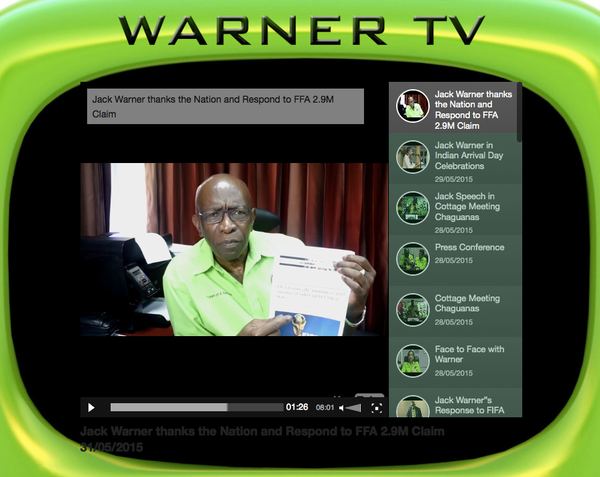 Jack Warner, a former vice president of world soccer’s governing body, FIFA, defended himself against corruption charges on Sunday by citing an article from The Onion, apparently unaware that it was satire.

Mr. Warner, 72, who was arrested last week in connection with a wide-ranging criminal investigation by the United States Justice Department, held up the faux news report, calling it evidence of an American conspiracy, in a video statement that was uploaded to the web and then removed later in the day.

The satirical article, published Wednesday under the headline, “FIFA Frantically Announces 2015 Summer World Cup in the United States,” mockingly suggested that, to placate American officials, the governing body had added a new tournament, which would begin the very same day.

Holding up a printout of The Onion piece as if it were a genuine news report, Mr. Warner told viewers of the video posted on his personal website, Facebook page and YouTube channel, “All this has stemmed from the failed U.S. bid to host the World Cup.”

Mr. Warner, the leader of Trinidad’s Independent and Liberal Party, went on to suggest that American officials were primarily motivated by losing a bid to host the 2022 World Cup.

“The U.S. applied to hold the World Cup in 2022 and they lost the bid to Qatar — a small country, an Arabic country, a Muslim country,” he said.

“I could understand the U.S. embarrassment,” Mr. Warner continued, but it is important, he added, to “take your losses like a man.”

He then speculated further that a second goal of the criminal investigation that has ensnared him was to force “Russia to give up the World Cup,” which it is hosting in 2018.

“Why is it,” Mr. Warner asked of the American prosecutors, “that they believe that they have a right to the World Cup?”

As dramatic background music swelled, he went on, holding up The Onion article again, to accuse the United States of hypocrisy for accepting the right to host the (entirely fictional) “Summer World Cup, 2015, from the very same organization that they are accusing of being corrupt. That has to be double standards.”

In the video, Mr. Warner also said he was “consoled by the fact that many of you on the blogs, on Twitter, on Facebook, on other channels, throughout were very supportive of me and still are.” He assured his supporters that, “At the end of the day, all of the allegations against me shall be proven to be unfounded.”

“You see, it is not when you’re up that you know who your friends are,” he said, “it’s when you are perceived to be down.”

After Mr. Warner’s error in mistaking The Onion for a news source was noted, and mocked, on social networks, the video disappeared without explanation from his website and social media accounts.

Two hours later, it was replaced by an edited version of the video, missing 63 seconds and all references to The Onion.