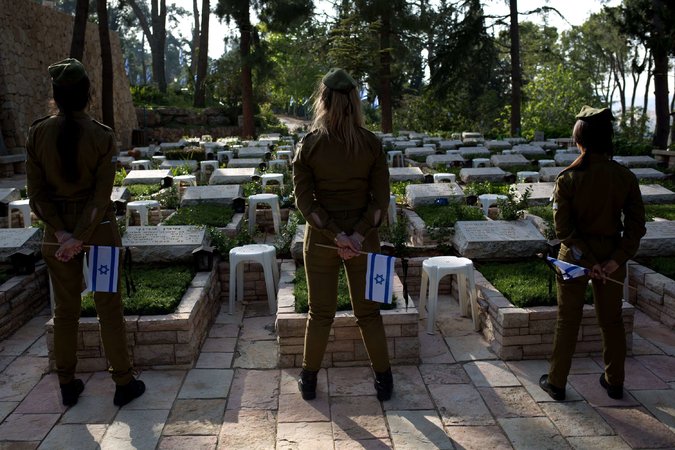 JERUSALEM — She had but one son, and he died childless at 21. Yet that boy spawned a generation.

At least 23 babies on three continents have been named for her Gil’ad, a lieutenant in the Israeli Army who was killed on the first day of the Yom Kippur War in 1973. Hers was a musical prodigy with a sly wit. The others include a lawyer, a professor, an entrepreneur and students, some now parents themselves.

“This kid is a genius,” the original Gil’ad’s mother said of one namesake, a consultant who made millions by the age of 25 and now travels around the world. She spoke on the condition that her name and her son’s surname not be published, citing privacy concerns. “They’re all geniuses,” she said.

Members of the Gil’ad generation will be with her on Wednesday, Israel’s Memorial Day. Fifty or 60 people still come to the ceremony she hosts each spring, more than four decades after her son was killed: soldiers who served alongside him in the Armored Corps, boy scouts from his Jerusalem troop, nieces and grandnieces and great-grandnieces, too.

Memorial Day is a solemn 24 hours in Israel; people save the barbecues for Independence Day, which is Thursday. The mourning is intimate: In a small and young country, everyone seems to have a connection to one or more of the 23,320 fighters whom Israel counts as fallen since 1860 in the conflicts that have framed its modern existence. Relatives, friends and even remote acquaintances often name children to honor their memory.

Besides the mass commemoration at the military cemetery on Mount Herzl, in between the school assemblies and synagogue services, there are personal memorials each year, held in houses and parks and gardens. Gil’ad’s takes place in the retirement home in the Baka neighborhood of Jerusalem, where his mother lives.

Last year, there were soft drinks and snacks, and the guests sat in a circle and shared their links to Gil’ad. His commanding officer — who named his first child Gilad (some people drop the apostrophe) — described what happened on Oct. 6, 1973, when Egyptian soldiers crossed the Suez Canal in a surprise attack. A soldier from his unit recited the names of 18 comrades who died.

If Sandy Cash — an American-Israeli folk singer married to Gil’ad’s cousin and, yes, the mother of a Gilad — makes it to the memorial this year, she will probably perform “Gil’ad’s Guitar,” the song she adapted after inheriting his Gibson six-string.

Gil’ad’s mother has enlisted two retired army men to speak this time, one about the heroes of Israel and the other about the search for soldiers still listed as missing. “I try to make new things every year,” she explained. “We’ve said almost everything there is to be said. It’s not a conventional memorial.”

Hers is not a conventional story. She grew up on the Lower East Side of Manhattan and followed a man to Israel in 1951. By 1954, they had divorced, and she returned to New York with Gil’ad. In 1965, after his bar mitzvah, they moved back to Israel, so the boy might at least know his father.

As a child, he played piano, guitar, accordion and recorder, favoring tunes by the Beatles, Simon and Garfunkel, and the Israeli star Arik Einstein. “He had a fantastic ear,” his mother said, still proud after all these years. “It was like a whole orchestra was going on in his head. He knew what sound he wanted.”

Gil’ad auditioned to be a military musician and was accepted, but he chose instead to join a combat unit, like his friends. Because he was his mother’s only son, she had to sign a special waiver.

Gil’ad’s mother, a retired teacher of children with learning disabilities and soldiers with head wounds, is 88 now. Her legs are frozen by neuropathy, so she uses a motorized scooter. Her fingers fumble with the buttons of her blouse, or to pull the black-and-white photos of her boy from a plastic sleeve.

There he is at 4, in New York, adorable in a hat, cradling a baseball; at 13, with tanned arms, playing a piano on the ship bound for Israel; not long before the war, all tousled hair and dimpled smile.

“I would say to him, ‘You’re the best son in the world’; he would say, ‘Every mother says that to her child,’ ” she recounted. “I saw him shaving. I said, ‘Hey, you’re getting hair under your arms.’ He said, ‘What did you expect, feathers?’ ”

Gil’ad was the outstanding soldier in his officer’s course and became a deputy company commander in the Chermaish armored infantry unit. He also volunteered with Magen David Adom, Israel’s ambulance service.

It took six weeks for the army to notify Gil’ad’s mother that he was missing, and an additional week to confirm that he was dead. Soon after that, an acquaintance phoned, urgently beckoning her to the hospital.

“She wanted to ask me if it was O.K. to name her son, who had just been born, Gilad,” the original Gil’ad’s mother said. “Very good-looking boy. He married a lovely girl, and they have three kids. They live in Tel Aviv. When he comes to Jerusalem, he usually comes to visit, with two or three kids.”

The name Gil’ad refers to a biblical mountain range and is popular in Israel; perhaps the best-known Gilad today is Gilad Shalit, a soldier who was kidnapped by the Gaza-based militant group Hamas in 2006 and held for five years before being exchanged for about 1,000 Palestinian prisoners.

The namesakes of the Gil’ad who died in the Yom Kippur War include a professor in London “who became interested in Yiddish theater,” the mother said, and a nephew of hers in the United States. One grew up on Gil’ad’s father’s kibbutz and now lives in a Jerusalem suburb, and another — her brother’s grandson — is in the Israeli bedroom community of Beit Shemesh.

There are girls named for Gil’ad, too — one called Gili is studying hotel management, and another, Geulah, is “a brilliant attorney,” the original Gil’ad’s mother said.

The latest namesake was a relative born a few years ago, she said: “His father didn’t even know Gil’ad.”