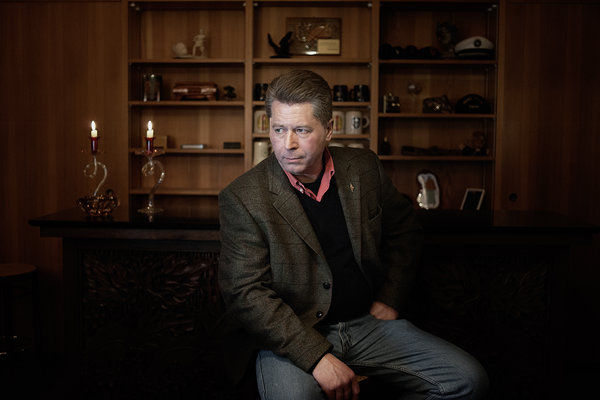 MUNICH, Germany — For anyone looking for insight on how to deal with President Vladimir V. Putin of Russia and the Kremlin as negotiations over Ukraine intensify, Franz J. Sedelmayer has some advice.

Russia’s tactics “are always the same — drag things out so long that everyone gives up,” Mr. Sedelmayer, a German security consultant and entrepreneur, said over a meal of Bavarian liver soup and pork in Munich, his hometown, where Western leaders ended a security conference Sunday divided over how to stall Russian aggression in Ukraine.

“You cannot give in,” he added. “Russia only respects the language of strength. Nothing else works.”

Mr. Sedelmayer, 51, speaks from experience. He has known Mr. Putin, 62, since the Russian president was an obscure municipal bureaucrat in St. Petersburg in the 1990s, when the Kremlin seized the newly renovated offices there of a security company headed by Mr. Sedelmayer.

Today, Mr. Sedelmayer is the rarest of victors against strong-arm Kremlin tactics, having recently wrested millions of dollars in compensation after a 20-year legal fight that he said was replete with trumped-up charges of tax evasion, veiled threats and repeated warnings to back off.

“I think this is the first time the Russians have been forced to pay up to a private claimant,” Mr. Sedelmayer said, savoring his success in extracting from Russia more than twice the compensation he sought when his struggle began in the 1990s.

Moscow’s dogged, and ultimately very costly, battle to avoid bowing to a lone but persistent German businessman — detailed in numerous court documents — shows the extent to which the Kremlin will stubbornly pursue even a seemingly counterproductive strategy in the name of defending its national interests.

Still, after fighting about 140 different cases with Russia since 1996, Mr. Sedelmayer believes that over the long run, sustained pressure can work against the Kremlin.

He and Mr. Putin were friendly in their St. Petersburg days. Under an arrangement brokered by Mr. Putin, Mr. Sedelmayer’s now defunct security company, SGC International, equipped and helped train a SWAT team for the St. Petersburg branch of the post-Soviet K.G.B.

On Mr. Putin’s 42nd birthday in 1994, the German even sent Mr. Putin a gag gift of four electronic listening devices, and received a note back expressing thanks “from one professional to another.”

But in December 1994, the Kremlin issued a decree that ordered Mr. Sedelmayer to hand over his company offices on Kamenny Ostrov, an island in St. Petersburg, for which he had a 25-year lease.

After the decree, Mr. Putin, then the city’s deputy mayor, promised to do what he could to smooth the conflict, but left no doubt that his ultimate loyalty was to the Russian state and the opportunities it offered for his own career advancement, the businessman said.

“He told me: ‘I cannot go against the government. I still want to make a career in Russia,’ ” Mr. Sedelmayer recalled.

Mr. Putin’s stance paid off handsomely. Pavel P. Borodin, the head of President Boris N. Yeltin’s property department and the driving force behind the expropriation, hired Mr. Putin in 1996 to help manage a vast portfolio of assets, including Mr. Sedelmayer’s seized compound, which was turned into a state guesthouse.

At the time he got the job, Mr. Putin was out of work, having left the city government following elections that unseated his boss, Mayor Anatoly A. Sobchak, and he looked set to fade into oblivion. Instead, Mr. Borodin put Mr. Putin on a career fast track that would take him to the Kremlin.

Mr. Putin has not commented publicly on the case, one of dozens involving jilted foreign investors who have gone to court since the 1991 collapse of the Soviet Union to try to receive compensation for deals gone awry.

But he has quietly dismissed two officials involved in dealing with Mr. Sedelmayer’s claims, including the head of the presidential property department, Vladimir Kozhin, who was fired last year. Another was dismissed and placed under investigation.

In a written response to questions, Viktor Khrekov, the property department’s spokesman, said he could not comment on whether the shake-up was related to Mr. Sedelmayer’s case. He acknowledged that the German businessman “had managed to get his demands satisfied in part,” but added that Russia had “from the start considered and still considers the actions of F. Sedelmayer as unlawful” and would keep fighting against his “judicial blackmail.”

From the beginning, Mr. Sedelmayer said, he tried arbitration and negotiation. Rebuffed in his demands for compensation, he took his case to courts across Europe. Russia in turn put up ferocious resistance, court documents show.

It took nearly two decades, but as a result, instead of getting $2.3 million from Russia in accordance with a 1998 ruling in his favor by a Stockholm arbitration panel, Mr. Sedelmayer has received around $6.8 million. (Moscow agreed to arbitration under a 1989 investment treaty between the Soviet Union and West Germany that mandated compensation for expropriated assets.) The money, which includes $2.3 million paid in December, came from the sale of six Russian-owned buildings in Cologne, Germany, that a German court ordered put up for auction to cover the Stockholm award, plus hefty interest, that Moscow had for years refused to honor.

Mr. Sedelmayer, who now runs an asset recovery company that advises clients on how to settle international disputes, also forced the sale of a Russian trade mission building in Sweden for $1.5 million but Moscow filed a complaint claiming that the sale violated international law, delaying distribution of part of the proceeds to Mr. Sedelmayer.

“It makes no sense, but they just don’t give up, even if it only hurts them more,” Mr. Sedelmayer said, referring to a blizzard of countersuits by Moscow in an effort to reverse its losses. “They are still going now.”

Russia’s efforts to avoid paying have backfired so badly that even some Russian media outlets usually loyal to the Kremlin have voiced dismay over Moscow’s handling of the case.

Mr. Sedelmayer said that even as he was baffled by Russia’s counterproductive approach, he had often doubted whether he would prevail.

When Mr. Sedelmayer first told Moscow that he would go to court in Germany to enforce the 1998 Stockholm ruling, an official at the Kremlin’s property department phoned his Russian-born wife at their Munich home and warned that Russia would “deal with” her husband if he did not stop demanding payment.

Mr. Sedelmayer complained that this amounted to a physical threat, an accusation that drew a tart response from another property department official, Sergei N. Bolkhovitin. In a July 2003 letter, Mr. Bolkhovitin derided the accusation of threats as “unethical” and explained that the official who had called Mr. Sedelmayer’s wife merely wanted to make clear that “the Russian Federation will take all necessary steps to protect its interests, using absolutely lawful and legal means.”

Mr. Bolkhovitin insisted in the letter that Russia had never refused to pay compensation and had issues only with how much to pay and how to pay it. This assurance was followed by more than a decade of legal trench warfare to avoid paying anything.

When a German court in 2006 first ordered the sale of Russian property in Cologne to enforce payment of the 1998 Stockholm award, Moscow responded by accusing Mr. Sedelmayer of bilking Russia out of $65 million through unpaid taxes from his long-defunct St. Petersburg business. It offered to drop the claim if he relented.

Mr. Khrekov, the Kremlin property department spokesman, said last week that Russia had already won a case against Mr. Sedelmayer for $65 million in St. Petersburg and was now pressing the claim before a French court. Mr. Sedelmayer dismissed the suit as “frivolous.”

Many other businesses, creditors and investors have been down this road, including Western banks that tried to recover the billions they lost after Russia defaulted on a big chunk of its debt in 1998, and the shareholders of Yukos, a private oil company taken over by the state in 2004.

Some have managed to get court or arbitration rulings in their favor, but none have had much luck forcing Russia to obey these judgments.

Despite his travails, Mr. Sedelmayer said he still had a soft spot for the Vladimir V. Putin he thought he knew back in the early 1990s — a conscientious and clean bureaucrat who, unlike many of his colleagues, did not ask for bribes.

“Perhaps it was his K.G.B. training or his character, but he could be very likable,” Mr. Sedelmayer said. “But he was always like a mirror. He would basically reflect what you wanted to see.”