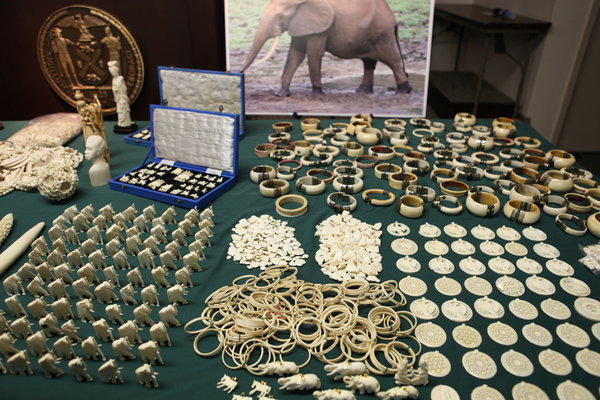 WASHINGTON — Hoping to stem illegal wildlife trafficking, the Obama administration on Wednesday introduced an aggressive plan for taking on traffickers that will include using American intelligence agencies to track and target those who benefit from the estimated $20-billion-a-year market.

The plan, which was outlined by officials from the State Department, Justice Department and Interior Department, will also increase pressure on Asian countries to stop the buying and selling of illegal rhinoceros horns, elephant ivory and other items, which President Obama has called an “international crisis,” and will try to reduce demand for those items worldwide.

“Right now, wildlife trafficking is a very profitable enterprise,” said John C. Cruden, the assistant attorney general for the Justice Department’s Environment and Natural Resources Division. “Our goal is to take the profit out of this illegal trade with all the tools at our disposal.”

But the planned actions, a result of a two-year administration review on how to limit wildlife trafficking, will be supported by only a modest increase in funding and staffing for the law enforcement arm of the United States Fish and Wildlife Service, the agency chiefly responsible for policing the wildlife trade.

Anti-trafficking experts praised the effort as an important step, even as they said the government faced a daunting task.

“It’s fantastic that we are doing this, but given that there are still limited resources, the government needs to really focus its efforts and go after the criminal organizations behind the trade in the most critical areas both here and abroad,” said Crawford Allan, a wildlife trafficking expert with Traffic, a program of the World Wildlife Fund. “They can’t have a scattershot approach where they put a little money here and a little there.”

The action comes as the United States has grown into the second-largest market for illegal wildlife products and a major conduit of the products to Asia, where rhino horns and ivory are believed to cure ailments like headaches and hangovers. Officials say that millions of pounds of illegal animal products, including bear and fish bladders, are sold every year to American and foreign customers. The trade has driven several animal species to near extinction while fueling the growth of international criminal gangs.

“The ongoing slaughter of rhinos and elephants in Africa is driven by rising consumer demand here, and United States citizens are intimately involved in illegal trade both here and abroad,” said Daniel M. Ashe, the director of the Fish and Wildlife Service.

As part of the administration’s effort, the wildlife service is for the first time sending officers abroad to help combat trafficking originating in Africa, Asia and South America. One officer has been posted to Thailand, and three will be sent to Tanzania, Botswana and Peru later this year. In its most recent budget request, the administration asked for $75.4 million a year for the wildlife service’s law enforcement division, $8 million more than the year before.

About $4 million of the funding would be used to support efforts to stop wildlife trafficking in African countries, and another $4 million to expand forensic labs and add special agents.

But even with the increase, wildlife service officials say that the staffing remains inadequate and that investigations have fallen from more than 13,000 in 2012 to about 10,000 last year.

The service has 205 investigators and an additional 120 officers who patrol nearly 40 ports of entry, examining more than 180,000 wildlife products last year.

“We have the same number of officers we had in the 1970s, when the trade was nowhere like it is now,” said Edward Grace, deputy director of law enforcement at the wildlife service. “We try to go after the big smugglers, but a lot falls through the cracks.”

Since 2012, records show that American law enforcement officials have arrested 26 people and prosecuted 18 for trading in rhino horns and ivory as part of Operation Crash, a nationwide criminal investigation into the black market for wildlife.

In addition, officials have smashed smuggling rings trading in gall bladders and paws from black bears and the totoaba, a fish in Mexico that has been pushed to the brink of extinction because of illegal trafficking. A totoaba bladder can fetch up to $20,000 in Asian countries, where it is prized in soups.

Court records and other documents show that the smuggling rings are made up of Chinese and Japanese traders; people with links to Mexican and South American drug cartels; Irish gangsters; American auction and antique dealers; and South African safari operators.

Most traffickers have little to fear, law enforcement officials said, because only an estimated 10 percent are caught. Law enforcement agencies often lack the resources to fully police the illegal trade. Also, fines for trafficking are low, and loopholes in the law still allow trade in some items, like ivory.

The shadowy wildlife trade takes place in auction houses and antique stores across the country, self-storage facilities in places like Chelsea and the Bronx in New York, and on the Internet, officials said. Smugglers bring in the items mainly through ports in New York and Los Angeles.

Stopping the ivory trade has proved to be especially problematic, officials said.

Under American law, ivory can be sold if it is more than a century old. But an investigation of vendors in the Los Angeles and San Francisco areas last year by the Natural Resources Defense Council, an environmental organization, found that 77 percent to 90 percent of the ivory sold by vendors in the two cities might be illegal under federal law.

While many vendors tried to pass the ivory off as 100-year-old pieces, investigators said many of the pieces appeared to have been chemically aged or physically damaged to look older.

“These fake antiques are a growing problem,” said Daniel Stiles, a wildlife investigator based in Kenya, adding that many of the pieces came from factories in China, the Democratic Republic of Congo and Nigeria, where raw ivory taken from poached elephants is carved into statues and altered to look older.

Trafficking in wildlife has decimated elephant and rhino populations in Africa. The latest figures from South Africa show that 1,215 rhinos were killed last year, up from a little more than 300 in 2010.

Congress is also trying to address wildlife smuggling. Last month, Senator Dianne Feinstein, Democrat of California, and Senator Lindsey Graham, Republican of South Carolina, introduced a bill that would increase fines for trafficking in wildlife and allow law enforcement officials to confiscate the assets of traffickers.

“The problem with these wildlife crimes is that the penalties are too low,” Ms. Feinstein said. “They aren’t much of a deterrent. We want to change that.” The bill is pending.