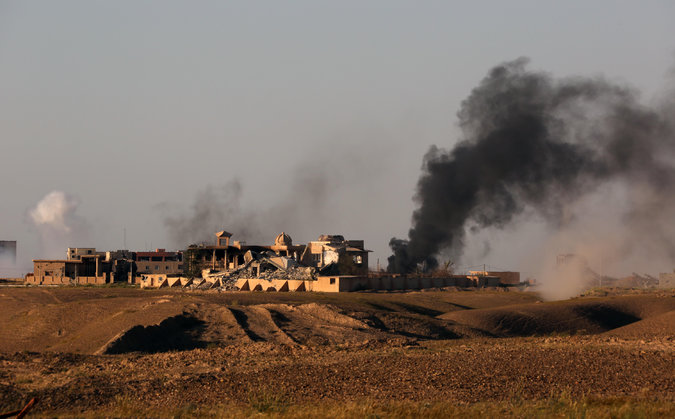 WASHINGTON — Already struggling to navigate the chaos engulfing much of the Middle East, the United States is now dipping its toe into another conflict.

In Yemen, the Obama administration is supporting a Saudi-led military campaign to dislodge Iranian-backed Houthi rebels despite the risks of an escalating regional fight with Iran.

But in Iraq and Syria, the United States is on the same side as Iran in the fight against the Islamic State, contributing airstrikes to an Iranian-supported offensive on Tikrit on Thursday even while jostling with Iran for position in leading the operation.

All that while the Obama administration is racing to close a deal with Iran to remove economic sanctions in exchange for restraints on its nuclear program, alarming Saudi Arabia and Israel.

The administration finds itself trying to sustain an ever-growing patchwork of strained alliances and multiple battlefields in the aftermath of the Arab Spring four years ago. The momentary moral clarity of the demands for democracy across the region has been replaced by difficult choices among enemies and unappealing allies who have rushed to fill power vacuums.

Corrupt and dysfunctional Arab autocracies that had stood for half a century in places like Egypt, Syria, Iraq, Yemen and Libya lost credibility because they had failed to meet the needs of the citizens. But no new model has emerged; instead, an array of local players and regional powers are fighting skirmishes across the region as they vie to shape the new order, or at least enlarge their piece of it.

Making sense of the Obama administration’s patchwork of policies “is a puzzle,” said Tamara Cofman Wittes, a researcher at the Brookings Institution and former senior State Department official.

The chaos gives regional rivals “more reasons to fight out that power struggle and more arenas to do it in,” Ms. Wittes said.

The lightning pace of events has fueled criticism that the Obama administration has no long-term strategy for the region. In picking proxies and allies of convenience, the argument goes, the administration risks making the chaos worse — perhaps strengthening terrorist groups’ hand, and deepening the chances of being drawn into fights Americans do not want.

One senior Obama administration official described the difficulty of trying to develop a coherent strategy during a period of extreme tumult.

“We’re trying beat ISIL — and there are complications,” the official said, speaking on condition of anonymity. “We have a partner who is collapsing in Yemen and we’re trying to support that. And we’re trying to get a nuclear deal with Iran. Is this all part of some grand strategy? Unfortunately, the world gets a vote.”

The administration had until recently held up Yemen as a model of a successful counterterrorism campaign, only to see the American-backed government in Sana crumble and the efforts against Qaeda operatives in Yemen crippled indefinitely. Earlier this week, American Special Operations troops stationed there had to detonate their large equipment before evacuating Yemen and flying across the Red Sea to an American base in Djibouti — concerned that the war matériel would fall into the hands of the Houthi forces.

In Yemen, Syria, Iraq and elsewhere, the administration talks as if it is supporting the orderly transitions to state building, but its actions are in fact helping to dismantle the central states, said Peter Harling, a researcher with the International Crisis Group, who with the journalist Sarah Birke recently wrote an essay analyzing the regional dynamic.

In each case, local players like the Islamic State or the Houthi movement have stepped into a power vacuum to stake their own claims, but none have the credibility or wherewithal to unify or govern.

But Washington, Mr. Harling said, insisted in each case on maintaining the fiction that its favored local player had a viable chance to rebuild an orderly state — whether moderate rebels in Syria, the Shiite-dominated government in Baghdad or the Hadi government in Yemen.

The Western powers “have to pretend the situation is not as bad as it is, so they don’t have to accept failure and take ownership of the situation,” Mr. Harling said. “In many years of working in the region, I have never seen such a distance between statements and fact.”

The Saudi-led military campaign against the Houthis has led to fears of a burgeoning proxy war among the Middle East’s big powers. But it is unclear how, or if, Iran will directly respond to a campaign led by a coalition of Sunni nations against a Shiite militia force. Some Middle East experts caution that the Houthi rebels are hardly puppets of Tehran, and that Iran spent years largely ignoring the group’s struggles in Yemen.

Stephen Seche, a former American ambassador to Yemen, said that the Houthis had rarely defined their struggle in Yemen in sectarian terms and that their ties to Iran had been overstated by Gulf nations.

“The Saudis and the Sunnis have made this a sectarian issue,” he said. “This military campaign is the Sunni world saying to Iran: Get out of our backyard.”

Saudi officials argue that Iran has orchestrated the Houthi military advance so they can exert influence on yet another Middle Eastern capital and destabilize Saudi Arabia’s southern border. Adel al Jubeir, the Saudi ambassador to Washington, told reporters Thursday that there was evidence that Iranian Revolutionary Guard operatives and Hezbollah fighters had embedded with the Houthis. He called the military campaign a way to protect the Yemeni people as well as “a way of protecting our national interests.” But while Saudi officials welcome American support for the Yemen operation, they are keeping a wary eye on the United States’ interactions with Iran elsewhere in the region.

Leslie Campbell, the regional director of Middle East and North Africa programs at the National Democratic Institute, said that it was hard to ignore the notion that the Saudi-led offensive in Yemen was in part a message to the United States as it negotiates a nuclear deal with Iran and finds, to some degree, common cause with Iranian-backed Shiite militias in Iraq.

The message, he said, is “if you all want to make friends with Iran, have a good time; this is what you’re going to get.”

Few disagree that the continuing tumult in the Middle East has scrambled American priorities there. This has led many to argue that the Obama administration’s policy for the region is adrift — without core principles to anchor it.

But amid the confusion, some experts said that there cannot be an overarching American policy in the Middle East at the moment. The best the White House can do, they said, is tailor policies according to individual crises as they flare up.

“I would be more concerned if we had some sort of overly rigid policy,” said Barbara Bodine, another former American ambassador to Yemen who is now the director of the Institute for the Study of Diplomacy at Georgetown University.

“It is messy. It is contradictory. That’s foreign policy.”