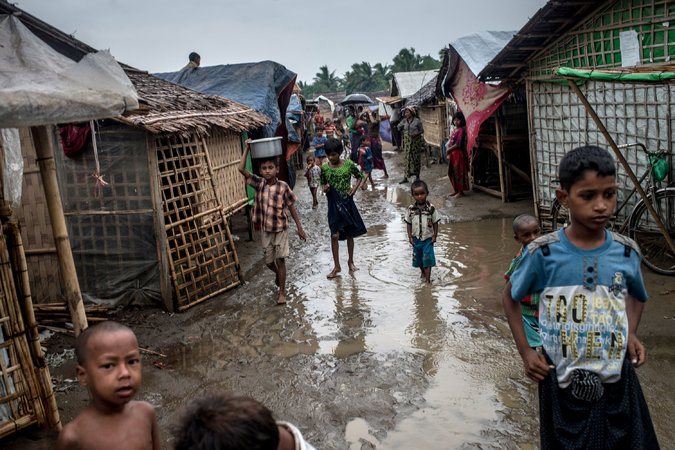 BANGKOK — The Myanmar government forcefully rejected on Friday assertions by the United Nations that the root cause of Southeast Asia’s migration crisis is Myanmar’s treatment of the Rohingya, a stateless and persecuted Muslim minority.

At a meeting here called to address the continuing exodus of migrants and refugees from Myanmar and Bangladesh, a Myanmar diplomat told delegates from about 20 countries that his government should not be singled out for the refugee crisis, that its policies toward the Rohingya were “domestic jurisdiction” and that outsiders were misinformed about what was motivating the Rohingya to leave.

So far this year, an estimated 25,000 people have left Bangladesh and Myanmar on boats — double the number last year — and several hundred people are believed to have died at sea.

U Htin Lynn, Myanmar’s representative at the meeting, said the United Nations was wrong in its assessment of the problem. “They need to be more informed,” he said. “This issue of illegal immigration of boat people, you cannot single out my country.”

Mr. Htin Lynn was responding to comments by Volker Türk, a representative from the Office of the United Nations High Commissioner for Refugees.

Mr. Türk said Myanmar should remove restrictions on the movement of the Rohingya within Myanmar and offer “basic freedoms” to stabilize their lives.

More than 100,000 Rohingya in Myanmar live in camps, having been chased from their homes by mobs of radical Buddhists over the past three years. Mr. Türk said the government should facilitate the return of the Rohingya to their homes.

“Granting of citizenship is the ultimate goal,” he said. “Recognizing that Myanmar is their own country is urgently required.”

The Rohingya in Myanmar number more than one million and are widely reviled in the country, where anti-Muslim feelings run strong among the majority Buddhist population. The government rejects the term Rohingya; Myanmar officials had threatened to boycott the meeting on Friday if the term Rohingya was used. The Rohingya are denied citizenship by Myanmar and are described by the government as interlopers from Bangladesh despite the fact that they have been allowed to vote in Myanmar twice — in 2008 and 2010 — and that many if not most were born there.

The meeting in Bangkok was organized by the Thai government. During a session open to the news media on Friday morning, delegates repeatedly stressed that the underlying reasons for the continuing exodus must be dealt with.

“There’s no solutions without addressing the root causes,” Mr. Türk said. “Among other things, this will require full assumption of responsibility by Myanmar towards all its people.”

The preferred path of the Rohingya and of Bangladeshi migrants, some of whom also call themselves Rohingya, has been to board boats in the Indian Ocean and head to relatively wealthy Malaysia, where they seek jobs or political asylum, and often both.

A delegate from Malaysia at the conference said that his country was currently home to 152,830 registered asylum seekers and refugees, of whom 149,920 were from Myanmar.

The Rohingya typically travel via Thailand, where loose law enforcement has allowed the people-smuggling business to thrive. But a crackdown by Thailand on human trafficking that began in early May left thousands of migrants stranded at sea, and more than 3,000 refugees have landed in Indonesia and Malaysia in recent weeks.

Shahidul Haque, the foreign secretary of Bangladesh, said he estimated that around 30 percent of those who landed in Malaysia and Indonesia were from Bangladesh.

“It appears they were lured with the false prospect of seeking jobs abroad,” he told delegates. “Some of them reported that they were tricked.”

Mr. Haque urged the diplomats and government officials gathered at a luxury hotel to help eliminate the suffering of the migrants and “uphold their dignity.”

“We are talking about human beings who are victims or potential victims,” he said. “They deserve our compassion.”