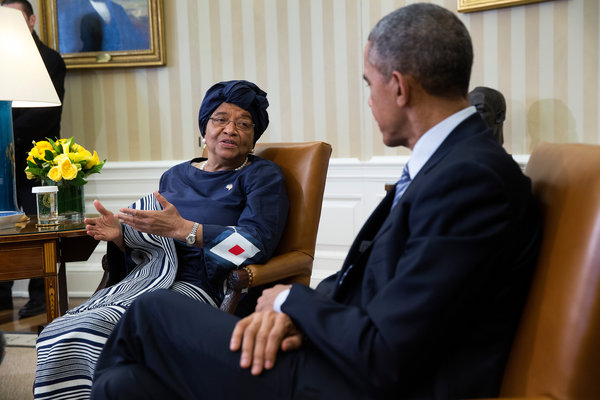 WASHINGTON — President Ellen Johnson Sirleaf of Liberia on Friday urged the United States to maintain its assistance to her country as it continues to fight to recover from the Ebola outbreak, which began about one year ago.

In a meeting at the White House with President Obama, Ms. Johnson Sirleaf asked for help with power projects to keep the country’s hospitals and new treatment centers running, for clean water and sanitation facilities to stop the disease from spreading, and for road construction to make it easier for sick people in rural areas to get to hospitals.

Nearly 10,000 people in West Africa have died from the Ebola virus.

“We can neither rest, nor lift our foot off the gas,” Ms. Johnson Sirleaf said on Thursday during an earlier event on Capitol Hill hosted by Senator Chris Coons, Democrat of Delaware. “We are determined to get to zero cases by April 15.”

She said that while Liberia, with help from the United States and other countries, has made huge strides in fighting the disease since the epidemic peaked there in September, Ebola must now “be chased down in every corner” and eliminated.

By all accounts, the situation in Liberia is starkly different today than it was in September, when Ebola had so ravaged the country that Mr. Obama deployed 3,000 American troops to Monrovia to build Ebola treatment facilities and to help increase efforts to fight the hemorrhagic disease.

At the time, new cases were exploding at an exponential rate, and the Centers for Disease Control and Prevention put out a dire projection that if effective methods to contain the disease could not be developed, Liberia and Sierra Leone could have a total of 1.4 million Ebola cases by January. Guinea, another country hard hit by the disease, faced a similar prognosis.

The C.D.C. noted that if everything was done right, the epidemic would be “almost ended” by Jan. 20. Success would require conducting safe funerals where no one touched bodies, treating 70 percent of patients in treatment units, and changing local behavior to stop the spread of the disease.

Now, against all odds, Liberia appears to have pulled off the C.D.C.’s best-case scenario. Ms. Johnson Sirleaf said that 13 of the country’s 15 counties had reported no new Ebola cases in more than 21 days. “We are down to one to three infections per week, and chasing the very last element of the chain of transmission,” she said.

Earlier Friday, the 101st Airborne Division formally ended its mission to fight Ebola in Liberia, as military officials declared that they had largely completed their mission there.

“Five months ago, we stood at this exact spot and uncased the colors of the 101st Airborne Division,” Maj. Gen. Gary J. Volesky said during a ceremony at the Barclay Training Center military barracks in Monrovia. “That day was the day the United States military brought our full weight to bear in support of our government’s response to contain the Ebola virus in Liberia.”

But the success so far in Liberia belies grim news in neighboring Sierra Leone and Guinea, where Ebola cases have continued to mount. The World Health Organization this week reported 99 new cases of the disease in the week ending Feb. 22 — 35 in Guinea, 63 in Sierra Leone and one in Liberia.

“The steep decline in case incidence nationally in Sierra Leone from December until the end of January has halted,” the organization warned in its weekly report. “Transmission remains widespread, with eight districts reporting new confirmed cases. A significant proportion of cases are still arising from unknown chains of transmission.”

The Obama administration said it was shifting its focus to track patients and their contacts case by case.

Ms. Johnson Sirleaf took pains to thank the administration and Congress for helping Liberia. “If I had the time, I would go door to door thanking all 535 members of Congress,” she said.

“I wrote to President Obama asking for America’s support,” she added. “Well, America responded. You did not run from Liberia.”