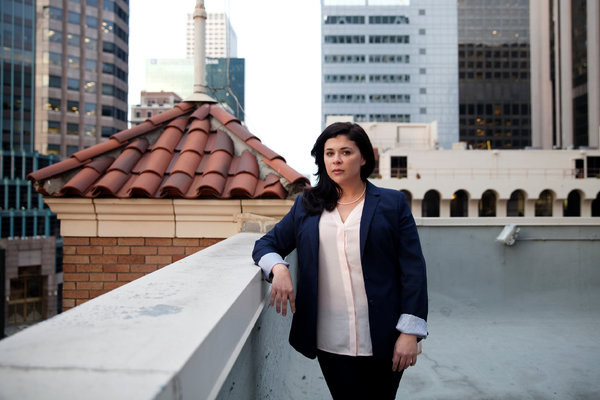 Intimate, often painful allegations in lawsuits — intended for the scrutiny of judges and juries — are increasingly drawing in mass online audiences far from the courthouses where they are filed.

When a former saleswoman at Zillow sued the real estate website in December, describing X-rated messages from male colleagues, her court filing drew hundreds of thousands of readers, causing an instant public relations crisis for the company.

The papers in a sexual harassment suit filed last summer against Tinder, the dating app, circulated in a popular Buzzfeed post. And a lawyer for a fired University of Minnesota-Duluth women’s hockey coach who is planning a lawsuit knows what the initial complaint will need: a clear narrative and damning details.

More and more, the first court filings in gender-related suits, often allegations that inspire indignation, are winning wide readerships online before anyone steps foot in a courtroom.

As a result, plaintiffs are finding themselves with unexpected support — and greater-than-ever power to ruin reputations. Panicky defendants are left trying to clear their names from accusations that sometimes are unsubstantiated. Judges and law professors, watching the explosion of documents online, fear such broad exposure is throwing court proceedings off track and changing the nature of how civil suits are meant to unfold.

“It’s not clear that lighting a match and dropping it in the public sphere is going to be a reliable way to bring closure,” said Jonathan Zittrain, a Harvard professor of Internet law who compared the practice to the old campus tactic of scrawling the names of alleged rapists on women’s bathroom walls.

Though all sorts of legal records circulate online — the document website Scribd has more than six million — those involving gender or claims of sexual misconduct tend to resonate more widely than complex corporate litigation or low-level disputes. Lawsuit papers are generally public, but before the advent of electronic filing, most of them remained stuffed inside folders and filing cabinets at courthouses.

Now some plaintiffs’ lawyers, calculating that they will be protected from defamation suits when making charges in civil complaints, distribute the first filings online as a way of controlling the narrative. But more often, electronic case databases, blogs and social media propel a case into the spotlight even when the parties are not public figures.

“If I file a complaint and call a press conference and tell the world what the allegations are, and if those allegations are defamatory, I might get sued,” said Dan Siegel, the lawyer for Shannon Miller, the Minnesota-Duluth coach, who the university said was let go for budget reasons even though her counterpart on the men’s team remained. But if someone else downloads and circulates the complaint, as many courthouse information services do, Mr. Siegel and his peers are most likely safe.

When Rachel Kremer, 30, a former Zillow saleswoman from Orange County, Calif., filed her complaint, she was not certain “that people would care so much,” she said in a telephone interview. She was surprised to find that her court filing, which alleged that she had been ranked according to breast size, had received graphic photos and had been subjected to “sexual torture,” was soon all over her Facebook feed.

(A Zillow spokeswoman, Katie Curnutte, said Ms. Kremer’s claims “do not accurately reflect life and culture at Zillow, where people work hard and respect one another.” In an email, the spokeswoman added that two of the employees who had sent the messages had been dismissed.)

Next Ms. Kremer started getting supportive LinkedIn messages from strangers, including older women who said they had faced similar situations and regretted not speaking up. “The outpouring of support made me feel like it wasn’t as difficult to continue,” Ms. Kremer said.

For women who feel wronged, the online solidarity can be a valuable tool. “From the plaintiff’s perspective, it’s one of the great equalizers,” allowing women to gain ground against well-funded defendants, said Debra Katz, a Washington lawyer who has been bringing employment and sexual harassment suits for three decades.

But in terms of fairness and resolving disputed issues, “these cases are a mess,” Ms. Katz said. In Zillow’s response to Ms. Kremer’s lawsuit, the company disclosed that she had sent lewd messages to male colleagues — a fact that may prevent a jury from agreeing with her sexual harassment claim, as the judge pointed out in writing.

One day in 2013, Juan Monteverde, a Manhattan lawyer, got a phone call from his shocked wife, who had been emailed a copy of a complaint alleging that he had harassed a younger female colleague, Alexandra Marchuk, at work and coerced her to have sex. He had no idea he was even being sued, but the complaint was soon proliferating online.

Mr. Bursor said that under other circumstances he might have advised his client to settle just to end the case. But both he and the plaintiff’s counsel, Harry Lipman, said the online attention had hardened the defendants — not just Mr. Monteverde but his employer, the family-owned firm Faruqi & Faruqi.

That kind of clear-our-name-at-all-costs outlook can prolong a case or intensify its contentiousness, with negative consequences for both sides. Last month, a jury rejected many of the most sizzling claims in Ms. Marchuk’s complaint, awarding her $140,000 for gender discrimination, far less than the millions she had sought. Along the way, the attention she drew, including a series of bruising counterclaims by the defense that were eventually withdrawn, was “horrible” and a “career killer” in her legal specialty, her lawyer said. (Through him, Ms. Marchuk declined to comment.)

Lawsuits involving well-known figures and sensitive issues have always drawn publicity, of course. But now that more courts are using electronic filing systems, judges and lawyers say they worry that the public is consuming lawsuits without any context. The most serious consequences: that some victims, fearing that the potential adverse aspects of online attention will outweigh the benefits, will decide not to file complaints at all.

“I don’t think any of us had any idea what the words ‘going viral’ meant when we rolled this out 10 or 12 years ago,” said James Robertson, a retired federal judge in Washington who helped guide the introduction of the federal electronic filing system.

In interviews, several plaintiffs’ lawyers said the current online environment was already deterring potential clients from filing suit. Now a Google search can forever portray even a successful litigant as “the complainer, or the slut who allegedly slept with the boss,” as Danielle Citron, a University of Maryland law professor, put it. Those who have suffered privacy violations, like nude pictures posted online, risk making the original damage worse if they sue, since courts are generally reluctant to allow plaintiffs to file anonymously.

Leigh Goodmark, another Maryland law professor, said the online boom of gender-related court documents was a harbinger of a future in which virtually no legal document — an eviction notice, a divorce pleading with embarrassing details — would be safe from public consumption.

“Things people never bargained on getting out will get out,” she said.