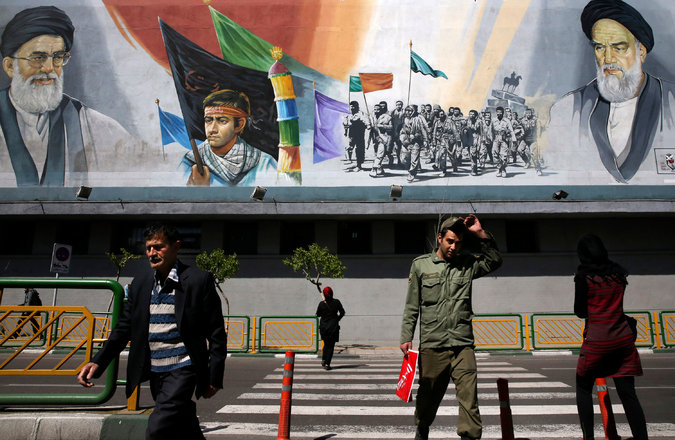 TEHRAN — Since the Islamic Revolution in 1979, Iranian hard-liners have been free to take to the streets and object to any form of compromise with the West, and particularly the United States.

But when a conspicuously small group of hard-liners did so on Tuesday morning in front of the Parliament building, holding up placards and shouting slogans against the nuclear framework agreed to last week in Lausanne, Switzerland, the Iranian Interior Ministry condemned the demonstration as illegal, because the protesters had failed to obtain a permit. There were also very few reporters.

It was perhaps the first time that conservatives — in this case mostly young people genuinely disappointed over the compromises Iran has made to reach a nuclear agreement — seemed disconnected from the power structure here.

Analysts say the message from the top is clear: Get with the program. Senior officials, important clerics, lawmakers and Revolutionary Guards commanders, who in the past have reflexively opposed any accommodation with the West, now go out of their way to laud Foreign Minister Mohammad Javad Zarif and his team of negotiators, as well as the government of President Hassan Rouhani.

One influential cleric even issued a statement to correct a quote attributed to him that suggested he had been slightly critical of the nuclear framework. “Unfortunately, these remarks are lies attributed to him,” the office of Ayatollah Naser Marakem Shirazi hastily made clear.

Only one man had remained silent: Ayatollah Ali Khamenei, the supreme leader, whose word is always the last. However, analysts say the broad support among conservatives is almost certainly a reflection of his thinking.

Hamidreza Taraghi, a political analyst close to Ayatollah Khamenei, said it should not be surprising that Iran’s establishment had closed ranks behind the negotiators and the talks.

“Wherever Foreign Minister Zarif goes to explain about the negotiations, his arguments are convincing and accepted,” he said. “Of course, we worry about some details, but they will be hammered out and solved, we are sure.”

On Tuesday, Mr. Zarif earned glowing praise after he paid a visit to Parliament to describe the nuclear framework and answer lawmakers’ questions.

Outside were the 150 or so hard-line demonstrators. “We are the voice of the people,” one of the protesters said. “We are worried over this deal.”

But some people passing by had different ideas.

“Go home,” someone yelled from a car window. “Drink the chalice of poison,” another shouted, a reference to a remark by Ayatollah Ruhollah Khomeini, the former leader of Iran, describing his bitter feelings upon signing a cease-fire after eight bloody years of war with Iraq.

“The people can swear at us,” said Vahid Aziz, an engineering student who held up a placard saying “We Are Worried.” They can swear, he said, because Iran is a democracy. “We also have the right to say something.”

But their opinion seems to be a minority one. In a poll conducted by the pro-government IRNA news agency, 96 percent of people in Tehran were found to support the nuclear deal. Opinion polls in Iran are notoriously unreliable, but the news agency insisted that 83 percent of the respondents “expressed happiness, hope and relief on hearing about the nuclear agreement achieved in Lausanne, Switzerland.”

For those who have long lived under the enforced opinions of minority groups, like Nader Karimi Joni, a former member of the paramilitary Basij organization who is now an activist and journalist, the progress in the nuclear talks is a vindication.

“These people protesting the deal are a small, doomed group of losers who do not understand that the perceptions of the establishment have changed” he said. “They can shout ‘Death to America’ all they want, but nobody in the government or in the establishment is in the mood for these sorts of actions.”

Iran’s interior minister, Abdolreza Rahmani Fazli, issued a warning that henceforth no illegal gatherings would be allowed. “Those who are ‘worried’ or ‘not-worried,’ they all need a permit to protest so we can guarantee their security,” he told the Arman newspaper.

But one of the organizers of the gathering, a 26-year-old student named Ali Mataji, said protest was necessary, “because we have the right to ask questions.” He added: “We will not stop, as there is a deviation of the national interests in the nuclear issue.”

Outside the Parliament building, a passer-by started a discussion with Mr. Aziz, the engineering student. “Why don’t you wait with your criticism until the deal is more clear?” the man asked.

“We need to bring awareness,” Mr. Aziz responded, waving his placard. The man shook his head, telling the protester, “Your actions are weakening the talks.”