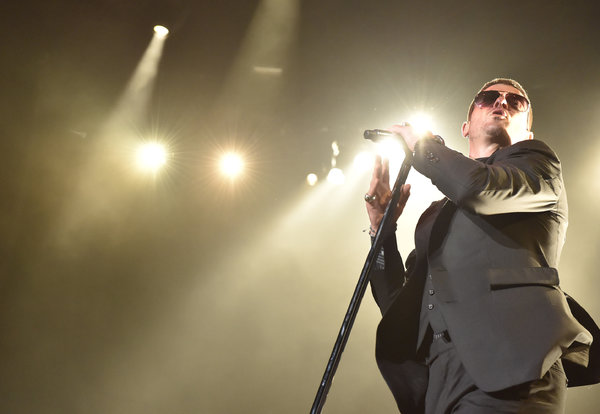 Before a special audience in Los Angeles last week, the velvet-voiced pop singer Robin Thicke performed his 2013 hit “Blurred Lines,” ran through a medley at the piano and discussed artistic inspiration.

Mr. Thicke’s stage was not an arena or a nightclub, but rather a federal courtroom where he is part of a lawsuit over copyright infringement that has gripped the music industry and revived perennial questions about when a song crosses the line from homage to outright plagiarism.

The case, which continues this week, pits Mr. Thicke and his two credited co-writers of “Blurred Lines,” Pharrell Williams and the rapper T.I., against the family of Marvin Gaye. The family accuses Mr. Thicke and his colleagues of using distinct musical elements of Gaye’s 1977 hit “Got to Give It Up” without permission.

Copyright cases can be esoteric affairs. But the “Blurred Lines” trial, which began Tuesday before Judge John A. Kronstadt in United States District Court for the Central District of California, has provided a rare window into an unseemly and embarrassing side of the music industry. Testimony and a flurry of pretrial documents have revealed lurid details of drugs, unearned songwriting credits, and intentional deception of the news media employed as a standard promotional practice.

Mr. Thicke has been the most affected by the revelations, many of which he has made himself. On Wednesday, he testified that despite his official credit, he did not write “Blurred Lines,” an upbeat tune that dominated pop radio in the summer of 2013. Instead, Mr. Thicke said, the song was largely written by Mr. Williams.

“The biggest hit of my career was written by somebody else, and I was jealous and wanted credit,” Mr. Thicke testified, according to news reports. “I felt it was a little white lie that didn’t hurt his career but boosted mine.”

Mr. Williams, who was present in court at the beginning of the trial and is expected to testify this week, has acknowledged the issue of incorrect credit with a shrug. “This is what happens every day in our industry,” he said in an earlier deposition in the case.

Lawyers for both sides declined to comment while the case was in progress.

The lawsuit has drawn attention not only for the fame of the parties involved but also because of what legal experts said was the relative rarity of an infringement case that goes to trial. Accusations of plagiarism are common, these experts said, but are often settled quietly to avoid embarrassment and further expenses.

“There is an old saying in the music business,” said Kenneth J. Abdo, a music lawyer who is not involved in the “Blurred Lines” case, “that if you get a hit, you will get a writ.”

Another recent case involved Sam Smith’s song “Stay With Me,” a global smash that won two Grammy Awards. After being approached by representatives of Tom Petty, Mr. Smith’s publishers quickly admitted that parts of “Stay With Me” were uncomfortably similar to Mr. Petty’s 1989 hit “I Won’t Back Down,” and gave credit — and royalties — to Mr. Petty and his co-writer, Jeff Lynne.

In a sign of how sensitive a plagiarism charge can be for musicians, even those victimized, Mr. Petty sounded almost apologetic after news of the settlement emerged. “All my years of songwriting have shown me that these things can happen,” he said in a statement.

The “Blurred Lines” affair represents a different extreme. In August 2013, Mr. Thicke and his fellow writers filed a pre-emptive suit against the Gaye family, seeking a judgment in their favor as protection against infringement claims that they said had been made privately. In response, Nona and Frankie Gaye, two of Marvin Gaye’s children, quickly countersued. (Marvin Gaye died in 1984.)

Janis Gaye, the mother of Nona and Frankie, testified last week that the family had at first been delighted with “Blurred Lines,” hoping that it could breathe new life into “Got to Give It Up.” Then they learned that Gaye’s song had never been licensed by the “Blurred Lines” songwriters, and they cried foul.

Rulings by Judge Kronstadt have limited the scope of the case to the sheet-music versions of both songs — meaning that any infringement must be decided only on the basis of chords, melodies and lyrics, not on the sound of the songs’ commercial recordings. As part of his testimony, Mr. Thicke performed “Blurred Lines” at a keyboard as well as bits of songs by U2, the Beatles, Michael Jackson and others, as a demonstration of how easily one song can be made to resemble others.

Still, during testimony by record executives and music experts, the jury — five women and three men, from various ethnic backgrounds — heard fragments of both “Blurred Lines” and “Got to Give It Up” in various combinations, leading to some confusion about musical terminology. At one point on Friday, the judge read a question from a juror: “Is there only one way to write a chord?”

If Mr. Thicke’s side loses, the potential damages could be large. “Blurred Lines” has sold 7.3 million copies in the United States, and Richard S. Busch, the Gaye family’s lawyer, claimed in his opening statement that the song had earned at least $30 million in profit — a figure Mr. Thicke’s lawyers disputed. If Mr. Thicke’s side is found liable of infringement, then the jury would decide what percentage of the song’s profits should be shared with the Gayes as damages.

In one prominent case in the 1990s, Michael Bolton and Sony lost an infringement suit brought by the Isley Brothers, and were ordered to pay $5.4 million.

The “Blurred Lines” case has stirred debate in the music world about what constitutes a fair amount of borrowing, particularly when it comes to atmospheric and textural elements that may be common in many songs.

“Even if they didn’t sample Gaye directly, it’s so similar that you could have predicted that this would happen,” said Sway Calloway, the MTV News personality. “The irony is that it’s supposed to be an homage. But you still have to follow the rules. If you’re going to take from someone else’s creation, then you may have to pay the piper.”