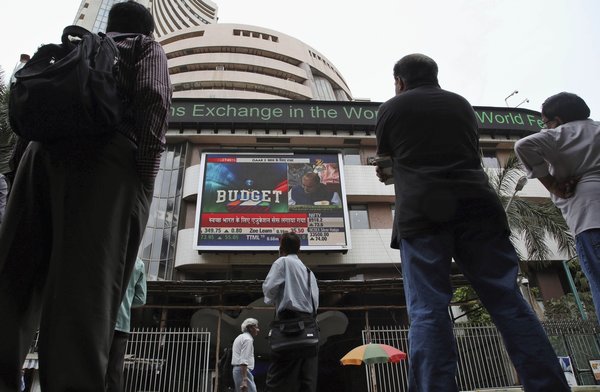 NEW DELHI — India’s finance minister, Arun Jaitley, unveiled the first full-year budget of Prime Minister Narendra Modi’s government on Saturday, promising to boost growth with a major increase in public spending on infrastructure and to lower the corporate tax rate by 5 percent, steps that were cheered by Indian industry.

Those moves were balanced by the relaxation of targets for spending cuts and the introduction of a new social security plan to provide subsidized insurance and pensions for poor Indians.

Though Saturday is usually a trading holiday, India’s financial markets opened for the much-anticipated budget speech, but neither they, nor most analysts, detected the dramatic reforms that some of Mr. Modi’s supporters have been urging.

The speech came against a sunny economic backdrop in India, especially in comparison to other developing economies. The government now predicts a growth rate of 7.4 percent in the current fiscal year, more than 8 percent next year and proceeding to double digits thereafter. Meanwhile, falling commodity prices have helped to curb India’s chronic budget deficits, a development that Raghuram G. Rajan, the governor of the Reserve Bank of India, described as “a $50 billion gift for the economy.”

Mr. Jaitley began his speech on a triumphal note, proclaiming that the government had, “turned around the economy dramatically” and rebuilt India’s reputation with investors.

“The credibility of the Indian economy has been re-established,” Mr. Jaitley said. “The world is predicting that it is India’s chance to fly.”

Ahead of the budget, much tension arose around the question of what was more important: to curb government spending or to spur growth by ramping up public investment, shifting the burden off a heavily indebted private sector and stressed banks.

Saturday’s budget leaned toward the latter, increasing annual spending on roads, ports and railways by 70,000 crore, or about $11.36 billion. It also scaled back goals for spending cuts, increasingly the fiscal deficit target to 3.9 percent of the gross domestic product from 3.9 percent, and slowing the timeline for a reduction to 3 percent by a year.

“This is not a big-bang budget, but a good budget more focused on smaller issues, and ironing out a lot of irritants to investors in the process,” said Sujat Hakra, chief economist at Anand Rathi Financial Services in Mumbai. The slower timeline for spending cuts, he allowed, was “not particularly positive.”

Manmohan Singh, who served as India’s prime minister for 10 years under the Congress Party, faulted the budget as too cautious, arguing that the new government had missed a chance to cut spending or increase tax revenues.

“Mr. Jaitley is a very lucky finance minister,” Mr. Singh told the NDTV news channel. “He has inherited an economy which is in reasonably good shape. Inflation is under control, not because of anything we have done, but because the international prices of petroleum and other commodities have gone down.”

He added, “I had hoped that the finance minister used this lucky phase of his inheritance to give a real big boost to stabilize the economy, strengthen the macroeconomic framework.”

Mr. Modi’s Bharatiya Janata Party suffered a setback in recent state elections in Delhi, where the upstart Aam Aadmi, or Common Man, party, cast him as indifferent to the needs of the poor. Mr. Jaitley, on Saturday, seemed intent on blunting that accusation. A new subsidized insurance program would provide coverage for accidents or death for 12 rupees, or around 20 cents, a year.

There were no significant changes to India’s colossal subsidy programs for food, fuel or fertilizer, which cost the government around $14 billion a year. The new government hopes to save money by transforming subsidies into cash transfers, a step that could save around $4 billion a year by eliminating corruption, according to the Credit Rating Information Services of India Limited.

“Subsidies are needed for the poor and those less well off,” Mr. Jaitley said. “We need to cut subsidy leakages, not subsidies themselves.”

One way the government intends to increase revenues is by cracking down on tax evasion, which is rampant here. Mr. Jaitley, speaking to a television interviewer after the speech, estimated that the government receives tax payments from only around 35 million Indians, or roughly 3 or 4 percent of the total population.

The new budget proposes a penalty of up to 10 years of “rigorous imprisonment” for concealing assets overseas, and would require citizens to provide a government identification number when making a purchase or sale for more than $1622. A new 2 percent tax will also be levied on the “super-rich,” those with taxable income of more than 1 crore rupees, or $214,431.

Corporate taxes, meanwhile, will drop from 30 percent to 25 percent, which could increase Indian firms’ compliance, said Ajay Bodke, head of investment strategy at Prabhudas Lilladher, a brokerage firm in Mumbai. Previous governments, he said, have given “given extremely aggressive revenue targets to tax officers, who in turn go about raising unreasonable demands.”

“He wants to foster a benign economic environment in which the relationship between the tax assessed and the assessor, which had frayed under the previous regime, is brought to an even keel,” Mr. Bodke said.

Mr. Jaitley set a deadline of April 2016 for a taxation change long sought by investors, which would replace multiple layers of local taxes currently levied at state borders with a national Goods and Services Tax. A constitutional amendment bill for the introduction of the Goods and Services Tax has been introduced in the lower house of parliament, a lack of realistic deadlines or credible information had slowed progress.

Several of the changes most ardently desired by investors could not be achieved in the budget, and instead require Mr. Modi to navigate a polarized legislature.

Among them is the liberalization of a highly restrictive 2013 law governing land purchases, which requires buyers to secure the consent of 80 percent of landowners on the property. Mr. Modi’s government has submitted an executive ordinance that would eliminate the consent clause and the requirement of a social impact assessment if land is to be used in certain ways – for industrial corridors, and affordable housing, among others – but needs the approval of both houses of parliament for it to take effect. The new government has yet to propose changes to India’s stringent labor laws, which has also deterred would-be builders of large factories.