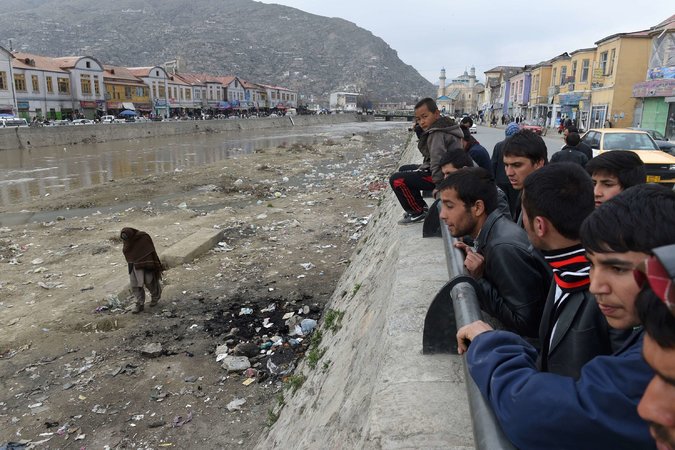 KABUL, Afghanistan — The mentally ill woman, her face covered in blood, rose to her feet and looked out across the mob. She pleaded. But these men meant to kill her.

A kick sent her tumbling backward. In the courtyard of one of Kabul’s most famous shrines, men hurled stones at her and struck her with wooden planks.

When she was dead, they tied her body to a car and drove to the Kabul River. On the garbage-strewn bank, they burned her corpse.

Her name was Farkhunda, and, for most of her 27 years, her parents had searched for help in treating the mental illness that had plagued her since girlhood.

None of that mattered to the mob. To them, she stood accused of a vile and sacrilegious act: burning pages from the Quran.

Kabul has been riveted since her death Thursday afternoon. Cellphone videos of the killing have been circulating widely, appalling some but drawing approval from others.

“If I had been there, I would have burned her, too,” said a man who on Friday had come to see the place along the riverbank where Farkhunda’s body was burned the day before.

But a hatmaker who had watched the mob from his shop condemned the attack as inhuman.

“What they did is brutal and completely against Islam,” said the hatmaker, Sayed Habib Saadat. What left him feeling especially worried, he added, was how many of the attackers were teenagers or young men in their 20s.

The divergent responses trace Afghanistan’s struggle between its commitment to conservative Islam and the Western notions of individual rights and due process that have been slow to take hold over the past decade.

On Friday, as the police arrested nine men believed to have been part of the mob, an official in the ministry of religious affairs said the attack on Farkhunda might have been justified if she actually did what she was accused of.

A few weeks ago, Farkhunda had told a doctor treating her that she planned to commit suicide, a top police investigator in Kabul, Gen. Mohammad Farid Afzali, said in a phone interview. In recent days she had stopped sleeping, her mother told television reporters.

“Farkhunda had a mental malady, and we have been seeing many mullahs and doctors to seek a cure for her mental illness,” her mother said.

Although ill, Farkhunda had kept up with her studies at a madrasa. On Thursday morning, after leaving school, she turned up at the shrine of the King of Two Swords, which honors a Muslim conqueror in Afghanistan who died in the seventh century fighting Hindu warriors.

Apparently, she was intent on making sure that visitors’ prayers at the shrine were in strict Islamic accordance. The attendants at the shrine say they did not recognize her, but she quickly made her presence felt.

One of the attendants, Shad Mohammad, said that Farkhunda began berating visitors, men and women alike. It was acceptable to pay their respects at a shrine like this, she instructed visitors, but it was not an appropriate place to worship.

When he told her to leave people alone, she turned on Mr. Mohammad. “She called me a two-rupee beggar and told me sit here quietly,” he said.

Later Farkhunda began to pace the shrine’s courtyard. Along the wall is a small metal firepit, where visitors throw orange rinds, soda cans and other trash from picnics.

Exactly what Farkhunda was burning is not certain. The independent television channel Tolo News, citing a government official in the religious affairs ministry, said that the burned pages were not from the Quran — the words were in Dari, not Arabic.

But when another of the shrine’s attendants, Zain-Ul-Din, rushed back to the firepit and pulled out the charred pages, he wasted no time in whipping up a mob. He laid the pages on a wood plank, which he then carried out to the street. There, according to witnesses, he began shouting: “The woman has burned the holy Quran! An infidel woman had burned the holy Quran!”

A crowd gathered within minutes, and it kept growing until it was hundreds strong. The men quickly cornered Farkhunda and began pelting her with rocks, while others egged the rock throwers on. Some men stomped on her as she lay in the street.

Police officers tried to intervene. They fired warning shots, and at one point a few members of the crowd joined the police in trying to save her. They pulled and pushed her out of the crowd and up onto a corrugated metal roof of an adjoining building, apparently hoping to find a way out of the courtyard. But Farkhunda fell — or was pushed back — into the mob.

On Friday, a young woman who had come to the shrine to pray emerged trembling with anger at what had occurred the day before. She looked around at the men standing in the courtyard — some had come to pray, others to gawk at the scene of the killing — and began to mock them.

“You are all men, and you say you are the protectors of women,” the woman said loudly. With tears streaming down her face and holding a bright handbag of pink, green and blue, she continued: “But you let her die in a brutal way! You’re not better than animals.”

She challenged them to treat her like Farkhunda. “Think of me as that crazy lady and attack me,” she said. “You can kill me now. Come on and hit me! Blame me for burning the Quran.”

Some men turned away, while others stepped closer to listen. “Why don’t you answer me?” she demanded.

Within moments, a police officer came to escort her out of the shrine.