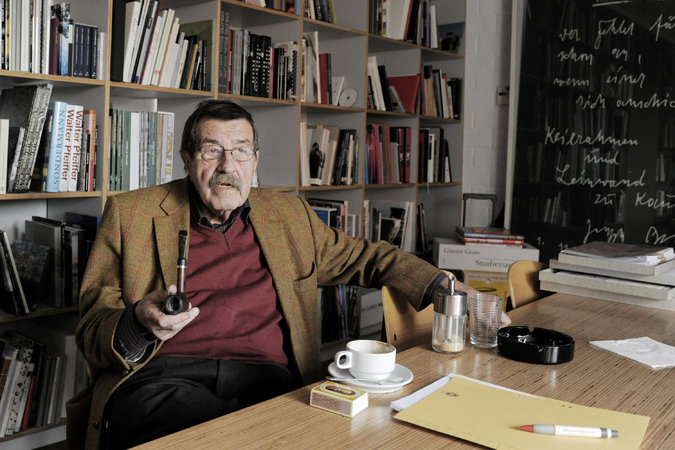 Günter Grass, the German novelist, social critic and Nobel Prize winner whom many called his country’s moral conscience but who stunned Europe when he revealed in 2006 that he had been a member of the Waffen-SS during World War II, died on Monday. He was 87.

Mr. Grass’s publisher, the Steidl Verlag, said the author died in a clinic in the northern city of Lübeck, which had been his home for decades. No cause of death was given.

Mr. Grass was hardly the only member of his generation who obscured the facts of his wartime life. But because he was a pre-eminent public intellectual who had pushed Germans to confront the ugly aspects of their history, his confession that he had falsified his own biography shocked readers and led some to view his life’s work in a wholly different light.

In 2012, Mr. Grass found himself the subject of further scrutiny after publishing a poem criticizing Israel for its hostile language toward Iran over its nuclear program. He expressed revulsion at the idea that Israel might be justified in attacking Iran over a perceived nuclear threat and said that it “endangers the already fragile world peace.”

The poem prompted an international controversy and a personal attack from Prime Minister Benjamin Netanyahu. Mr. Grass later said that he had meant to attack Israel’s government rather than the country as a whole.

The publication in 1959 of Mr. Grass’s wildly inventive masterpiece, “The Tin Drum,” propelled him to the forefront of postwar literature. Critics hailed the audacious sweep of his literary imagination. A severed horse’s head swarming with hungry eels, a criminal hiding beneath a peasant woman’s layered skirts, and a child who shatters windows with his high-pitched voice are among the memorable images that made “The Tin Drum” a worldwide triumph.

In awarding Mr. Grass the Nobel Prize in 1999, the Swedish Academy praised him for embracing “the enormous task of reviewing contemporary history by recalling the disavowed and the forgotten: the victims, losers and lies that people wanted to forget because they had once believed in them.” It described “The Tin Drum” as “one of the enduring literary works of the 20th century.”

Although Mr. Grass was a playwright, essayist, short-story writer, poet, sculptor and printmaker as well as a novelist, it was his role as a social critic that brought him the most notoriety.

For much of his career, he campaigned for disarmament and social change. By the end of the 20th century, however, his uncompromising anti-militarism and his warnings that a unified Germany might once again threaten world peace led some of his countrymen to criticize him as a pedantic moralist who had lost touch with real life.

The revelation of his Nazi past led to accusations of hypocrisy. He revealed it himself, days before a memoir, “Peeling the Onion,” was to be published. Mr. Grass had long said that he had been a “flakhelfer” during the war, one of many German youths pressed to serve in relatively innocent jobs like guarding antiaircraft batteries. But in an interview with the newspaper Frankfurter Allgemeine, he admitted that he had in fact been a member of the elite Waffen-SS, which perpetrated some of the Nazi regime’s most horrific crimes.

“It was a weight on me,” said Mr. Grass, then 78. “My silence over all these years is one of the reasons I wrote the book. It had to come out in the end.”

In his memoir, Mr. Grass reflected on the vagaries of conscience and memory. “What I had accepted with stupid pride of youth I wanted to conceal after the war out of a recurrent sense of shame,” he wrote. “But the burden remained, and no one could lighten it.”

Although he was conscripted into the SS in 1944, near the end of World War II, and was never accused of participating in atrocities, the fact that he had obscured this crucial fact of his background for decades while flagellating his fellow Germans for their cowardice set off cries of outrage.

“Moral suicide,” said the newspaper Welt am Sonntag. The playwright Rolf Hochhuth said it was “disgusting” to recall that Mr. Grass had denounced President Ronald Reagan and Chancellor Helmut Kohl for their 1985 visit to a cemetery in Bitburg where Waffen-SS soldiers were buried, while hiding the fact that he had been in the SS himself.

Mr. Grass’s defenders argued that his social and political influence had been highly positive for postwar Germany, forcing the country to face and atone for its Nazi past. He might not have been able to play that role, they said, if he had been forthright about his own background.

A longer version of this obituary will be posted online shortly.