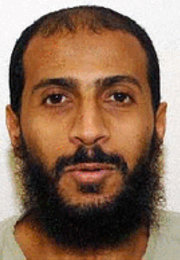 WASHINGTON — A federal appeals court on Friday threw out the conspiracy conviction of a detainee at Guantánamo Bay, Cuba, ruling that bringing the charge before a tribunal was unconstitutional because an international war crime was not alleged.

In a blow to the military tribunal system, a panel of the United States Court of Appeals for the District of Columbia Circuit vacated the conviction of the detainee, a Yemeni man named Ali al-Bahlul, who had been charged with conspiracy to commit acts of terrorism. The court, in a 2-to-1 ruling, said that the government could prosecute him only in a civilian court if it wanted to bring a domestic-law charge like conspiracy against him.

The question of whether foreign terrorism suspects should be prosecuted in civilian court or before a military commission has prompted a recurring political debate. Congress has banned bringing Guantánamo detainees into the United States for trial. It enacted statutes in 2006 and 2009 saying that prosecutors in military commissions could bring charges against terrorism suspects for offenses that include “providing material support for terrorism” and “conspiracy.”

Those charges are useful for prosecuting suspects who joined and aided a terrorist group but are not linked to specific attacks. The charges apply to domestic-law crimes, however, not international war crimes. If Friday’s ruling stands, the parts of the 2006 and 2009 statutes that allowed such lower-level cases to be funneled into military commissions would be voided.

“The government can always fall back on the apparatus it has used to try federal crimes for more than two centuries: the federal courts,” Judge David S. Tatel wrote in an opinion concurring with the result. “Federal courts hand down thousands of conspiracy convictions each year, on everything from gunrunning to financial fraud to, most important here, terrorism.”

The implications of the ruling are complex. Defendants have fewer protections in a military commission, and prosecutors may introduce “hearsay” evidence — statements made outside court by people who are not called as witnesses — that is generally not admissible in civilian courts.

But those lower standards of evidence may permit trials that produce sentences of defined length — an alternative to indefinite detention under the laws of war — for terrorism suspects who cannot be prosecuted in civilian court because the evidence against them would not be admissible.

Several detainees who received commission trials found that their convictions amounted to a ticket home after serving a sentence. Other detainees, who did not do anything specific enough to be charged, remain locked up indefinitely. Most of the 122 detainees remaining at Guantánamo have been held for 13 years.

A Justice Department spokesman and a defense lawyer for Mr. Bahlul declined to comment.

Mr. Bahlul confessed to making a propaganda video for Al Qaeda about the bombing of the American destroyer Cole in Yemen in 2000. He also admitted that he helped administer loyalty oaths to several of the Sept. 11 hijackers, made martyrdom wills for them and helped Osama bin Laden listen to news broadcasts during the attacks.

Late in George W. Bush’s administration Mr. Bahlul was charged before a military commission with several offenses, including conspiracy, material support and solicitation of terrorism. Mr. Bahlul pleaded not guilty but boycotted the trial. He was convicted of those three offenses, none of which are war crimes.

Military lawyers representing Mr. Bahlul appealed. Last year, the full Court of Appeals for the District of Columbia Circuit threw out all but the conspiracy charge and sent the case back to a panel for further consideration.

The new ruling by the panel to toss out that charge, too, went further than the previous decision by the full appeals court. The earlier ruling centered on the idea that Mr. Bahlul’s actions took place before 2006, when Congress first said that various charges not classified as war crimes could be prosecuted before a tribunal. The Constitution does not allow Congress to declare actions to have been crimes after the fact.

Judges Rogers and Tatel on Friday said that Congress could never make offenses that were not war crimes prosecutable in a military commission, even for future actions.

Last year, the chief prosecutor of the military commissions system, Brig. Gen. Mark Martins, charged another Guantánamo detainee, Abd al Hadi al Iraqi, with conspiracy for acts he is accused of committing after the 2006 law was enacted. The new ruling calls that charge into doubt.

General Martins has tried to shield the commissions system from the problem created by charging people over pre-2006 conduct with offenses that are not war crimes. Two and a half years ago, he objected to the Obama administration’s decision to further pursue Mr. Bahlul’s case, but was overruled.