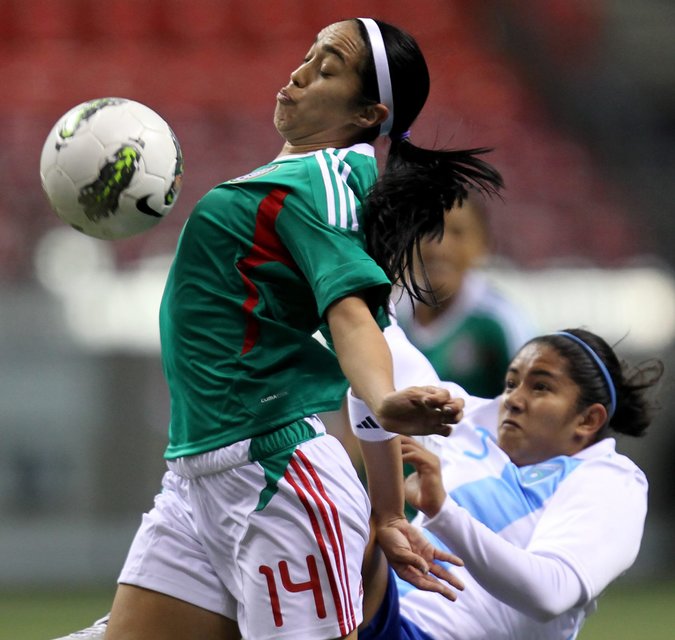 CARSON, Calif. — While growing up in suburban Los Angeles, Renae Cuellar, like many American girls, dreamed of getting the chance to play on the same field as Abby Wambach, Hope Solo and the rest of the United States women’s soccer team. Unlike most of those girls however, Cuellar has been able to fulfill her dream, though in an unusual way.

When she has taken the field with star American players, Cuellar did not wear red, white and blue. Instead, she displayed the green and white of Mexico.

“It’s going to be great to be playing in front of my family,” Cuellar, a 24-year-old forward who played at Arizona, said before Sunday night’s game, an exhibition that was part of the United States team’s send-off tour in advance of next month’s Women’s World Cup.

Cuellar, like many of her teammates, represents the fundamental contradictions in Mexican women’s soccer. The national program has surmounted numerous obstacles to achieve respect, but it has yet to build the basic organization it needs to survive.

When Mexico played in its first Women’s World Cup, in 1999, at least half of its players were born or raised in the United States. As Mexico prepares for this year’s tournament, the team has about 10 such players, said forward Tanya Samarzich, who also grew up in suburban Los Angeles. Under Mexican law, anyone who has a Mexican-born parent is entitled to citizenship.

Samarzich typifies the kind of player on whom Mexico relies. Born in Mexico, Samarzich and her family were living in Upland, Calif., when she received a text from her friend in 2008 about a nearby tryout camp for players of Mexican heritage.

“I thought it was a free camp,” Samarzich said. “I had no idea I was trying out for the Mexican national team until maybe the second day.”

“It’s not easy,” said Cuellar, who has guided Mexico since 1998 and is no relation to Renae Cuellar. “There are different habits, different levels of education. Some of them come from the club culture. Some come from the street.”

Monica Gonzalez, who was born in Texas and was an all-American at Notre Dame, was Mexico’s captain during the 1999 Women’s World Cup. Yet she believes Mexico must change its approach to developing players.

“I’m not against having American-born players come to Mexico, because that’s how I came,” Gonzalez told the Sporting Nation website in 2013. “But Mexico’s still very actively recruiting and having tryouts. They probably have more tryouts in the States for the national team than they do in Mexico, and I don’t think that’s right.”

Yet Samarzich, who will miss the World Cup because of a broken left foot, said the players supported one another regardless of background.

“They always have my back,” she said of her teammates. “If I don’t know something on the field, I’ll ask the older players for help. We’re like one big family.”

That family no longer must surmount a major obstacle its athletic ancestors faced: negative societal attitudes concerning women and sports.

“The biggest problem, especially in the beginning, was acceptance,” said Andrea Rodebaugh, who played for Mexico at the 1999 World Cup after concluding her career at California. “Women’s soccer had a negative image associated with it. Traditionally, everything that characterizes soccer doesn’t characterize girls and women.”

But two events proved to be turning points. The first was qualifying for the 1999 Women’s World Cup.

“That was very critical,” Leonardo Cuellar said. “We were at a point where the federation was trying to figure out if we were good enough to start a program.”

The second occurred four weeks after the United States had defeated China on penalty kicks to win that competition. At the Pan-American Games in Winnipeg, Mexico won the silver medal with basically the same team that had lost all three matches in the World Cup.

“After that, our federation and the people in Mexico realized we had some kind of potential,” Cuellar said.

Now, businesses that sponsor the men’s national team also sponsor the women’s squad. But Mexico’s federation has no permanent under-13 or under-16 girls’ national teams. Cuellar said the national federation planned to organize youth tournaments and a domestic professional women’s league.

“The girls want to play,” he said. “The girls want to wear a green jersey in international competition. Now we just need to create those structures, start building teamwork and building the atmosphere for them to understand that the only thing that matters is Mexico.”

For Rodebaugh, who now serves as a FIFA consultant and instructor on women’s soccer, such developments seemed inconceivable less than two decades ago.

“The differences compared to when I was a national team player are almost like night and day,” she said. “Had I been told in 1998 and 1999 that in 2015 Mexico would have three full national teams supported and funded with ongoing national team camps, friendlies against other national teams, trips to Asia, Europe and South America, I would have said, ‘No, we are light-years away from that possibility.’ ”