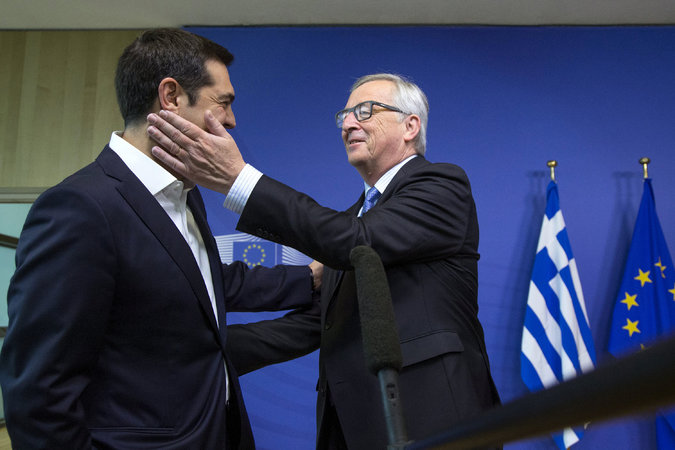 BRUSSELS — Eurozone finance ministers on Monday discussed the latest Greek debt proposal but ended their meeting without reaching an agreement, saying they would need to reconvene later this week.

That outcome made it unlikely that European heads of state would be able to reach any resolution on Greece’s long-running debt crisis when the leaders gather here in Brussels for an emergency meeting Monday evening. European Union officials said that meeting would still be held as scheduled.

The Greek government had submitted new proposals to its creditors early Monday morning, for the latest round of meetings meant to break the deadlock over a debt crisis that has imperiled Athens’s continuing membership in the euro currency zone.

Jeroen Dijsselbloem, the head of the Eurogroup of eurozone finance ministers, told a news conference after the Monday afternoon session that the Greek proposal was “welcome” and a “positive step in the process.” The proposal appeared to be “broad and comprehensive” and a “basis to really restart the talks.”

Mr. Dijsselbloem said the aim was to get a “final agreement later this week.”

The meeting of Eurogroup finance ministers was brief. After about two hours, Alexander Stubb, the Finnish finance minister, indicated that the session had broken up but that efforts to get a deal would go on.

For now, though, an agreement continues to elude Greece’s creditors — the other eurozone countries, the European Central Bank and the International Monetary Fund — despite months of talks. And now, critical deadlines for extending the bailout are approaching as June ends.

To buy time for Greece, the European Central Bank, for the third time in less than a week, on Monday increased its emergency funding to strained Greek lenders in an effort to replace heavy withdrawals from anxious depositors, according to a Greek banking official with knowledge of the decision who spoke on the condition of anonymity.

On Monday morning, Greece’s prime minister, Alexis Tsipras, had held an impromptu joint news conference here with Jean-Claude Juncker, the president of the European Commission. “I think this is time for a substantial and viable solution that would allow Greece to come back to growth within the eurozone,” Mr. Tsipras said.

Mr. Juncker said, “We have made progress over the last few days, but we are not yet there.” Mr. Juncker displayed his trademark jocularity by giving Mr. Tsipras a friendly slap to the face before heading off for a series of private talks.

Pierre Moscovici, the European commissioner for economic and financial affairs, said the latest proposals from Athens “represent a step forward, progress.” But he said that more needed to be done in areas including levels of sales tax and pensions in Greece to reach a deal.

There had been “such confusion during the night with alternative versions of the Greek proposal coming in that there hasn’t been” adequate preparation for the meeting, Michael Noonan, the Irish finance minister, told reporters.

“We understand the Greek authorities have made some movement, and that’s to be welcomed,” Mr. Noonan said. “But it’s not clear that the movement is sufficient.”

The crisis apparently came to a head after Athens resisted economic overhauls demanded by creditors. Those overhauls were required in exchange for a payment of 7.2 billion euros, or about $8.2 billion, from a bailout program that is due to expire on June 30. That same day, Greece faces a debt repayment to the International Monetary Fund of €1.6 billion, which most observers say the country cannot afford without new aid.

Donald Tusk, the president of the European Council who organized the emergency meeting of the leaders of the 19 European Union countries that use the euro, warned Athens late last week that it faced a critical choice on terms that had already been clearly outlined.