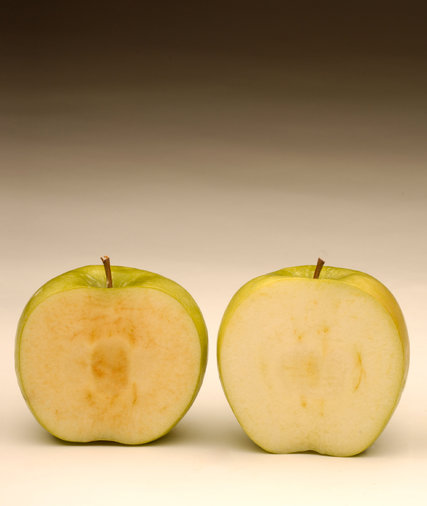 The government on Friday approved the commercial planting of genetically engineered apples that are resistant to turning brown when sliced or bruised.

The developer, Okanagan Specialty Fruits, says it believes the nonbrowning feature will be popular with both consumers and food service companies because it will make sliced apples more appealing. The feature could also reduce the number of apples discarded because of bruising.

But many executives in the apple industry say they worry that the biotech apples, while safe to eat, will face opposition from some consumers, possibly tainting the wholesome image of the fruit that reputedly “keeps the doctor away.” They are also concerned that it could hurt exports of apples to countries that do not like genetically modified foods.

“In the marketplace we participate in, there doesn’t seem to be room for genetically modified apples now,” said John Rice, co-owner of Rice Fruit Company in Gardners, Pa., which bills itself as the largest apple packer in the East.

The Department of Agriculture, which approved the apples for commercial planting, said on Friday that it had considered these issues. However, it said that under the law, approval is based on whether a genetically modified crop poses a threat to other plants. The department determined that the apples posed no such risk.

The so-called Arctic apples — which will be available in the Granny Smith and Golden Delicious varieties — are genetically engineered in a way to suppress the production of an enzyme that causes browning when cells in the apple are injured, from slicing, for example.

But over time the apples will still rot and turn brown. In November, the Agriculture Department approved a genetically engineered potato developed by the J.R. Simplot Company that uses a similar technique to prevent browning.

The engineered trait is also one of the few meant to appeal to consumers; most of the traits so far, like insect resistance and herbicide resistance, have been aimed at helping farmers.

The approval is also unusual in that Okanagan, which is based in Summerland, British Columbia, is a small company. Most genetically modified crops are developed by giant seed and chemical companies like Monsanto and DuPont Pioneer.

Neal Carter, the president of Okanagan, said the apple had “a lot of silent supporters” and would be popular with the food service business. “I can’t believe how many requests we’ve had just this morning to our website from people who want to buy trees,” he said. The roughly 45 investors in the privately held company include many people in the apple business, he said.

It will take a few years for Arctic apples to be widely available because trees have to first be planted and then become mature enough to bear fruit.

Mr. Carter said that four growers would plant a total of 20,000 trees this spring, covering a mere 20 acres or so. From 5,000 to 10,000 pounds of apples are expected to be ready by the fall of 2016, enough to provide samples to food service companies and other potential buyers. The product could reach stores, in very small quantities, in 2017, he said.

Documents released by the Agriculture Department on Friday suggest the decision to approve was essentially made last May. Mr. Carter said he thought political factors had kept the approval from being announced. He said the company, which had initially requested approval in 2010, finally became so frustrated that it wrote a pointed letter to Secretary of Agriculture Tom Vilsack last month.

A spokesman for the Agriculture Department said it took time to analyze the issues and all the comments received. There were two public comment periods that together drew more than 175,000 comments, the overwhelming majority opposed to approval.

Consumer and environmental groups, who say that genetically modified crops in general are not thoroughly tested for safety, were highly critical of the decision on Friday.

“This G.M.O. apple is simply unnecessary,” Wenonah Hauter, executive director of Food & Water Watch, said in a statement, using the initials for “genetically modified organism.” “Apple browning is a small cosmetic issue that consumers and the industry have dealt with successfully for generations.”

(Putting lemon juice or another source of vitamin C on apple slices can retard browning, though Okanagan argues that affects the taste.)

The environmental groups have been pressing food companies to reject the Arctic apples. McDonald’s and Gerber have sent letters saying they had no plans to use the apples. The groups also renewed their call for genetically modified foods to be labeled as such.

Mr. Carter said apples would be labeled as Arctic, with links to the company’s website, so consumers could figure out that the fruit was engineered. He said it would discuss with the Food and Drug Administration whether the apples would also be labeled as nonbrowning. But he said that labeling the fruit as genetically modified would only be “demonizing” it.

The nonbrowning effect is not created by putting genes from another species into the apple’s DNA, which is the case with most genetically altered crops. Instead, the apple’s own genes are manipulated in a way that turns off the browning mechanism.

Okanagan is still engaged in a voluntary consultation with the F.D.A. over the safety of the apple. Consumer groups say shutting off the browning mechanism could have unintended effects. But the Agriculture Department said the Arctic apples seemed to be nutritionally equivalent to other apples.

While many in the apple industry had opposed the approval, some now say they will work to ensure that consumers know most apples are not modified and even the ones that are modified are safe.

“That clear identification of the Arctic brand will help consumers make clear, informed choices if Okanagan apples do become available in stores in a few years,” Wendy Brannen, director of consumer health and public relations for the U.S. Apple Association, said in an email.