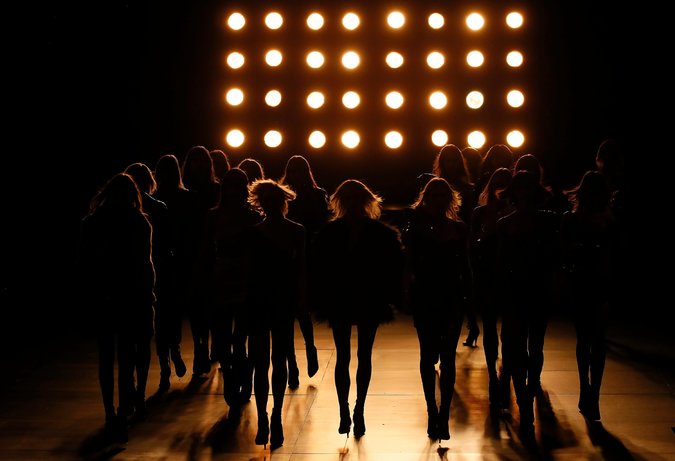 PARIS — France, which often seems to have style and elegance written into its genetic code, is again confronting one of the dark sides of fashion: the glamorization of too-thin women.

The French Parliament is debating legislation that would effectively set minimum weights for women and girls to work as models, a step that supporters of the bill say is necessary to combat the persistence of anorexia.

If it becomes law — it is backed by President François Hollande’s Socialist government — modeling agencies and fashion houses that employ models whose body mass index measurements do not meet minimum standards would face criminal penalties.

Israel already bans the use of underweight and underage models, while other countries, including Italy and Spain, have weighed legislation similar to the one under consideration in France but for now continue to rely on voluntary pacts with the fashion industry.

If France approves the legislation, it would almost certainly raise the debate to a new level, especially in Paris, the spiritual capital of the fashion world. An effort to pass similar provisions in 2008 failed after heavy criticism from the fashion industry.

“We can’t resolve it with a law but we can begin a public health policy to prevent and protect and limit the number of those suffering from anorexia,” said Olivier Véran, a neurologist and a member of the National Assembly, the lower house of Parliament.

He is the author of the anti-anorexia provision, which is part of a comprehensive health law being debated in the National Assembly. He estimated that 30,000 to 40,000 people in France suffer from anorexia.

The proposed legislation would use as its base internationally accepted body mass index standards to determine whether a model was too thin and would set criminal penalties for hiring models who fell below the standards determined by the law. The index suggests that a woman who is 5 feet 7 inches tall should weigh at least 120 pounds. But the final legal standards would be determined by the French health authorities, who could adjust them for factors such as bone size.

Violators would have to pay a fine of about $83,000 and serve as many as six months in prison.

The struggle over the appearance and health of fashion models is hardly a new one. It became more public in 2006 after the deaths of two models, a Brazilian and a Uruguayan, which set off a spate of voluntary standards in the industry and the effort in some places, including New York, to use healthier looking models.

The death in 2010 of a French model and actress, Isabelle Caro, who at one point weighed just 55 pounds, fueled further calls for steps to address anorexia.

So far the fashion industry has opposed legislation to address the issue, although a number of designers have spoken out in favor of using “healthy models” and promoting healthful lifestyles.

There is no official database of models’ heights and weights, and with regulations against using underweight models on the rise, most models and agencies are close-mouthed about the subject. Many in the industry say, however, that a number of the top models would likely weigh less than the healthy threshold set by the body mass index of about 18 or 18.5.

Widely publicized figures for weights of models like Kate Moss at the height of her fashion career indicate she would have had a body mass index of 15 to 16, which was similar to that of Twiggy, a 1960s supermodel. More recent models, such as Naomi Campbell and Gisele Bündchen, are reported to have body mass indexes between 16 and 17. A body mass index of less than 18 does not necessarily mean that someone has an eating disorder.

The National Union of Modeling Agencies in France issued a statement saying it was complying with a voluntary charter that discourages the use of anorexic models and that was approved by the government in 2008. The statement also said that an appropriate minimum weight for models had yet to be determined.

“Anorexia is a mental illness that cannot be fought by a ‘arithmomania,’ ” the union’s statement said. It called on the fashion world to take a uniform approach internationally and deplored the use of “selectively repressive” measures, referring to those now under consideration.

Calls to 10 modeling agencies with offices in Paris found none willing to respond to questions on the issue.

Elite, a top international agency, said through the secretary of its spokeswoman in Paris, Celine Rousseau, “We do not wish to comment on this news.”

When some international designers have been questioned about the problem, such as Karl Lagerfeld in a 2012 interview, they have denied having ever worked with anorexic models.

Even a glance through photos from the recent Fashion Week in Paris reveals many women whose bodies are almost without curves and whose faces have hollows where there should be cheeks.

But whether there is a connection between fashion’s images of women and the continuing phenomenon of tens of thousands of primarily but not exclusively young women in Western developed countries suffering from anorexia is hard to determine and unlikely to be halted just by an increase in the weight of models, French psychiatrists said. They recommended an array of steps to attack the problem.

“It’s not having a model weigh three kilos more that will resolve the problem,” said Marie Rose Moro, a child psychiatrist and the director of the Maison de Solenn, a residential facility that treats eating disorders and other mental health problems in young people. One kilogram is 2.2 pounds.

There is a “transnational sort of tyranny of thinness,” Dr. Moro said, adding that unlike in previous eras, to have a “rounded” shape today is equated with a lack of self-control and with “excess, obesity, poor health.”

Marcel Rufo, a psychiatrist with a clinic in Marseille for adolescents with anorexia or other troubles, said he believed that the public was searching for an explanation for children’s pursuit of thinness. He noted the proliferation of posts on blogs and on Twitter promoting the idea that girls should have a space between their thighs when standing with their legs together and that their stomachs should be concave.

“Parents, the public authorities, deputies in the National Assembly want to find a cause, something to blame,” Dr. Rufo said.

“So, one designates fashion as to blame, but I believe that it is much more complicated than that,” he said.