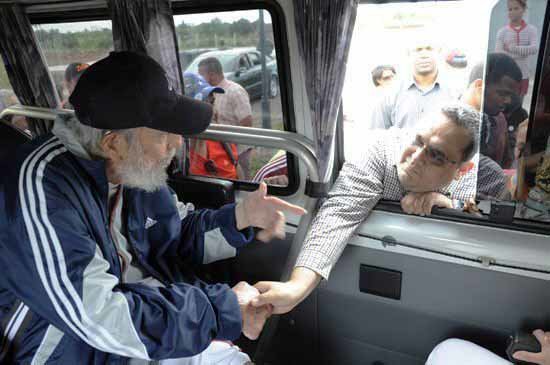 MEXICO CITY — Former President Fidel Castro of Cuba made a surprise appearance in public for the first time in 14 months, greeting a group of Venezuelan visitors as they toured a Havana school, the Cuban news media reported on Friday.

The report, which was published in the official Cuban newspaper Juventud Rebelde, was accompanied by four photographs of Mr. Castro seated in his van and shaking hands with enthusiastic visitors who reached through the window.

The article said the encounter took place on March 30 but did not explain the publishing delay.

It was also the first time Mr. Castro, 88, had been seen since his brother, President Raúl Castro, and President Obama announced in December that the United States and Cuba would normalize diplomatic relations and loosen many of the economic restrictions Washington had placed on the island.

The agreement was a step toward halting five decades of enmity that has sustained the propaganda defining the Cuban Revolution. But for almost six weeks, Fidel Castro was silent about the dramatic reconciliation, leading to rumors in Havana and Miami that he had died.

He finally spoke out at the end of January, when he published a letter in the Communist Party’s official newspaper Granma, explaining that he supported a peaceful resolution to conflicts but still distrusted American politics. A few days later, Granma published photographs of Mr. Castro in his home looking alert and animated during a meeting with a student leader from the University of Havana.

More photographs followed in early March when Mr. Castro met with five Cuban agents who had spent years in jail in the United States on espionage charges. Granma also published a letter from Mr. Castro about the five-hour meeting.

In the latest photographs, Mr. Castro was shown from inside his van, dressed in a blue Adidas jacket and a black baseball cap. The article said that the encounter lasted 90 minutes as Mr. Castro greeted the 33 Venezuelans in the exchange group one by one and discussed political affairs in their country. He called for people to petition Mr. Obama to reverse his declaration calling Venezuela a threat to the national security of the United States.

The declaration last month eroded some of the good will in Latin America that the new easing of tension with Cuba had generated for the United States, just weeks before the Summit of the Americas meeting in Panama April 10-11. Mr. Obama and Raúl Castro will both attend the meeting.