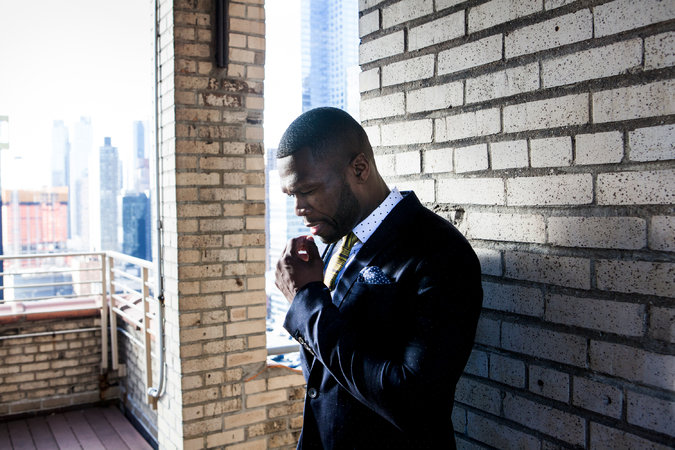 LAS VEGAS — So there I was with my finger inside 50 Cent’s mouth. At his invitation, I was massaging the back of his tongue.

It was not quite “Thug Love,” his 1999 ode to rough-edged romance that portended a rise to rap superstardom. But after chewing on a cheeseburger at Gordon Ramsay Pub & Grill here this spring, Curtis Jackson, better known as 50 Cent, leaned close to me and stuck out his flattened tongue.

He laid a little cloth napkin on top of it, grabbed my right index finger and steered it past his teeth.

“Can you feel it?” he asked, semi-unintelligibly, as my finger poked around.

This is not the guy I had envisioned. (For the record, I could not feel it, but more on that later.) The imposing physicality, the menacing lyrics, the rapper gear, the don’t-mess-with-me eyes: I had expected Mr. Jackson to land somewhere between intimidating diva and serial killer. Instead, he was soft-spoken, open, unfussy and arrived on time wearing a Versace shirt and a perfectly tailored Diesel Black Gold jacket. This was Mr. Get Rich or Die Tryin’?

It is well known that Mr. Jackson, 40, has exceptional business instincts. A former crack cocaine dealer who has been shot nine times, he has sold more than 22 million albums, and a new one, “Street King Immortal,” arrives in the fall. He is the chief executive of G-Unit Records. He founded a headphones company, SMS Audio. And he owns part of a vodka brand and Frigo, a line of luxury men’s underwear.

He also has a cologne, a sneaker brand and a video game series.

But much less recognized is Mr. Jackson’s Hollywood career, which is improbably thriving. Fiddy has somehow managed to become a credible actor.

He has appeared in 21 movies, including a memorable cameo in the Melissa McCarthy comedy “Spy” and a significant supporting role in “Southpaw,” a boxing drama starring Jake Gyllenhaal set for release July 24.

Mr. Jackson is also a producer and star of “Power,” a drama set in the druggy world of New York nightclubs — “Empire,” without the cheese — that was just renewed for a third season on Starz.

How did this happen?

It became obvious after meeting him: Mr. Jackson has always been an actor. “People see me as the bad guy, and I get that,” he said, bending a French fry into a loop and dipping it daintily in ketchup. “I’ve trained people to see me in a certain way. Perception is reality with the general public. It’s like Eddie Murphy. We expect him to make us laugh. If he’s in a drama, I think, ‘When is he going to make me laugh?’ ”

We were alone in a private dining room, and there was suddenly a hesitant knock on the door. It was a waiter with a look of terror on his face.

“Hi, I’m sorry, but I have a pickle update,” he said, stammering a bit. “You had asked for a pickle, and we were out. So we scrambled and got you pickles — even though, you know, I know you said you would eat it without a pickle. Anyway. Pickles!”

See, I told Mr. Jackson, after the waiter had been graciously thanked and sent away: People are afraid of you.

“There’s something about the bravado it takes to get on a stage, the charisma, that also allows them to hold an audience’s attention on a screen,” said Jeanine Basinger, a cinema scholar whose books include “The Star Machine.”

With the cultural rise of hip-hop and rap, along with online networks of fans, singers like Common, Ludacris, Ice Cube, Ice-T, LL Cool J and Rihanna have become especially sought after.

“Rap stars are tremendous assets in telling stories in movies and on television because they offer up their authentic selves and can bring an inimitable level of reality to the story being told,” David Rubin, a Hollywood casting director, wrote in an email. Mr. Rubin worked on the movie adaptation of “Hairspray,” in which Queen Latifah was a co-star.

In other words, a fan base is a fan base. “But those musicians-turned-actors only score when they are cast well, and are able, with the help of a filmmaker, to seamlessly bring their authentic persona to a character,” Mr. Rubin said.

But perhaps no musician lately has pursued Hollywood with the tenacity of Mr. Jackson, who even had tattoos removed to make himself less himself. He has not been content with cameos (Snoop Dogg arriving out of nowhere to say “shizzle dizzle”) and has kept going even after smacking his head on the cinematic pavement more often than maybe anyone. Even Madonna.

The low point was probably “All Things Fall Apart,” which found Mr. Jackson playing a cancer patient (he lost 54 pounds for the part) in a failed attempt to establish Mr. Jackson as an actor with serious range. After that, he fired his agents.

He does now, which has opened up opportunities in higher-caliber projects. To land “Southpaw,” Mr. Jackson came in on a Saturday at Harvey Weinstein’s request and taped a scene. In the film, directed by Antoine Fuqua (“Training Day”) and released by Mr. Weinstein’s company, Mr. Jackson plays a slippery boxing promoter.

“The way he’s written is true right to the note,” Mr. Jackson said of his character, a dapper fellow who appears in the opening frames wearing a cerulean suit, pinkie ring and black fedora. “I’ve always had passion for the sport of boxing,” he added, “and I’ve lived vicariously through the top guys in it, because I’ve had relationships with them.” (His stormy bromance with Floyd Mayweather Jr. most notably.)

In “Southpaw,” Mr. Jackson’s character explains his whipsawing allegiances by saying, “If it makes money, it makes sense.” The line also sums up Mr. Jackson’s intense interest in movies and television.

“The business climate for music has changed,” he said. “It’s not just the economics of music, but how music gets sold. Television is so important to that now. That’s where you hear something and you say, ‘Who is that?’ ” He has introduced multiple songs on “Power.”

Mr. Jackson also admitted that his acting career, inspired by Eminem in “8 Mile,” has been about wanting what he does not have. “When you’re conditioned for one art form, you really learn to appreciate the other,” he said. “You can watch a performance and think, ‘Wow, that was an interesting artistic choice. I wonder if I can do that.’ ”

So which is crazier, I asked: the music side of entertainment or the movie one?

“I see more desperation in movies, people doing whatever they have to do to make it,” Mr. Jackson said. “People’s actions are more extreme in movies. I mean, you still see women sleep with producers who can put them in a film.”

When I pressed him to be more specific, he clammed up — oops, said too much. There was an awkward silence, so I decided to do an abrupt turn.

“Is it true,” I asked timidly, “that you still have a piece of shrapnel stuck inside your tongue from getting shot?”