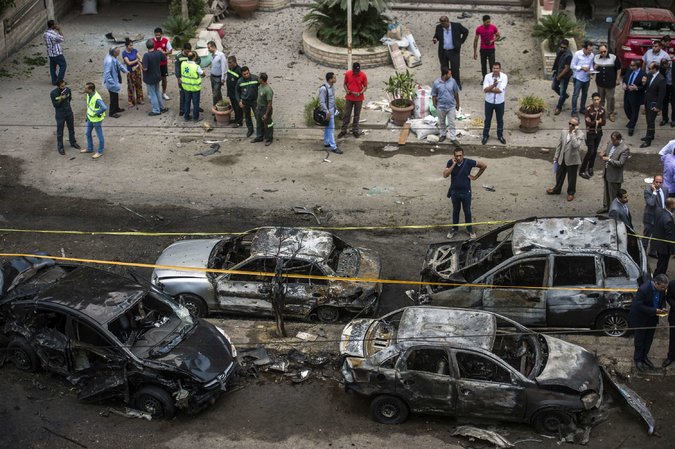 CAIRO — Egypt’s top prosecutor died on Monday of wounds he sustained when a powerful bomb detonated next to his car as he was driving to work, state news media reported.

The prosecutor, Hisham Barakat, is the most senior Egyptian official to be killed since insurgents began a wave of violent attacks against the military-backed government nearly two years ago.

At least seven other people, including two bystanders, were hurt in the attack, which incinerated several cars, in a residential area of the capital’s Heliopolis neighborhood.

Gen. Osama Bedeir, the head of Cairo security, said the explosive device was planted in a parked car and detonated by remote control. In September 2013, Egypt’s interior minister at the time, Mohamed Ibrahim, survived a similar attack on his convoy in Cairo.

After the explosion, Egyptian officials initially said that Mr. Barakat’s wounds were not life-threatening, and included lacerations to his face and a dislocated shoulder.

Ahmed Shazly, who witnessed the bombing on Monday, said that Mr. Barakat left for work every morning in a two-car convoy that apparently included an armored vehicle. Residents in the area, including Mr. Shazly’s doorman, were hurt by flying glass, he said.

The insurgency in Egypt gained strength two years ago after the military ousted Mohamed Morsi, Egypt’s first elected president and a leader of the Muslim Brotherhood, and began a sweeping crackdown on his supporters.

Bombings and shootings by militants have killed hundreds of soldiers and members of the security services. More recently, judges and judicial officials have been targeted in what the militant groups have described as retaliation for the prosecutions and convictions of hundreds of Islamists, including the imposition of death sentences.

Human rights workers have harshly criticized many of the prosecutions, saying they have relied on politically motivated charges and flimsy evidence.