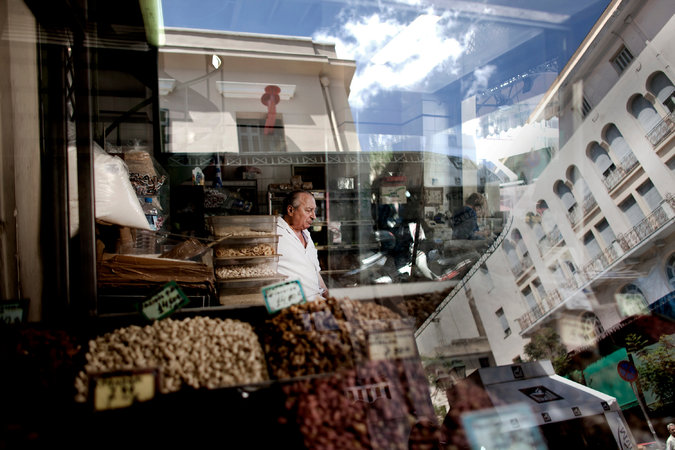 ATHENS — As Greece hurtles toward a Sunday deadline for either reaching a bailout deal or risking a hasty exit from the eurozone, the one certainty is that its economy is already on the brink of collapse.

Businesses and humanitarian organizations are warning that the social and commercial damage now evident could become deeper and longer lasting if Greece and its international creditors cannot finally come to terms on a new bailout package.

“Greece already has a humanitarian crisis, and we’ll have to prepare for a harder aftermath if a deal collapses,” Nikitas Kanakis, the president of the board of directors of the Athens chapter of Doctors of the World, a health care charity, said on Wednesday. “I’m not sure how proud we should feel about letting social destruction return within Europe.”

With banks closed and the government virtually out of money, Greece has become isolated from the international economy — a big problem for a country that relies on imports for 65 percent of its goods. Cargo containers of food, some medicines and other daily necessities are beginning to pile up on the docks at Piraeus, the international seaport outside Athens, because capital controls make it difficult or impossible to pay the shippers.

“We can’t do anything to prepare for a situation like this,” said Nikos Manisoitis, who runs Nikos Manisoitis & Son, a family-owned importer of spices and dried goods like pasta and pet food, which was founded in Piraeus 95 years ago by his grandfather. “We feel like hostages,” he said. “We can’t move our money from the banks, and we fear that we are about to lose everything.”

Mr. Manisoitis, who is also president of a local business group, the Piraeus Traders Association, said that some importers at the port had boarded planes with up to 60,000 euros, or about $66,000, in cash for day trips to Britain, Germany or other European countries to pay their suppliers. That has become necessary, he said, to sidestep the government-imposed capital controls that have been in place since June 28. While not restricting the physical flow of cash within the European Union, the controls have forbidden making electronic payments outside of Greece.

“We’re living like we did 60 years ago,” Mr. Manisoitis said, referring to the bleak period that followed World War II, which devastated Greece and its economy.

Even though Greece represents just 2 percent of the eurozone economy, the implications of a brick’s falling out of the euro currency union could be unpredictable, especially if it occurs at the same time as the steep decline in the Chinese stock market.

Five years of economic crisis have already taken their toll on Greece, hollowing out the solid middle class and causing tens of thousands of small and midsize businesses to close their doors.

Businesses are bewildered about how to prepare for a situation in which Greece has to start functioning on i.o.u.s or shift to its own currency. That cascade of events could begin as soon as Monday if a bailout deal is not reached and the European Central Bank cuts off the emergency lifeline that has kept Greek banks alive in recent months.

On Wednesday, the Greek government announced that banks would remain closed through Friday. Many Greeks doubted that they would reopen on Monday, the day after European leaders are to decide whether to accept Greece’s latest bailout request.

Christian Noyer, the governor of France’s central bank, said on Wednesday that the European Central Bank would have to stop providing emergency lending to Greek banks unless there were an accord with creditors by Sunday.

“The Greek economy is on the verge of catastrophe,” Mr. Noyer, a member of the European Central Bank’s Governing Council, said on Europe 1 radio.

Also on Wednesday, Greece’s main business associations said that the capital controls were causing “economic suffocation,” and they warned of an “explosion of unemployment” if Prime Minister Alexis Tsipras and other European leaders could not reach a deal that would keep Greece in the currency union.

“The business community of Greece wishes for our country to remain a member of the eurozone,” members of the Hellenic Confederation of Commerce and Entrepreneurship wrote in an open letter on Wednesday.

Unemployment recently shot back above 26 percent, and youth joblessness exceeds 50 percent. The economy, which after a five-year recession edged back into growth last year, returned to a recession in the first quarter, when the Tsipras government came to power on a no-more-austerity platform.

Economists say that during the second quarter, as Greece conducted fruitless debt negotiations with its eurozone creditors and the International Monetary Fund, the economy almost certainly continued its contraction.

Even if a deal is struck at the last minute, economists say, the economy has been set back by at least a year.

And by some estimates, Mr. Tsipras’s call for last Sunday’s referendum may have doubled or tripled the cost of any new bailout. Once he broke off debt negotiations, the creditors allowed the country’s existing bailout program — which had provided for €240 billion in loans since 2010 — to expire.

Eurasia Group, a London-based analytical firm, estimates that any new aid package might cost about $20 billion to $30 billion more than what Greece might have been able to arrange by renegotiating under the previous bailout program.

On Wednesday, Greece applied for a new three-year loan from the eurozone bailout fund. Details were not made public, though analysts said the government most likely sought €50 billion or more. Whether Greece will receive that money depends on the make-or-break negotiations over the next few days.

The European Commission president, Jean-Claude Juncker, said late Tuesday, after frustrated negotiators set the Sunday deadline for Greece, that European officials were making contingency plans for a Greek departure from the eurozone — which might include “humanitarian aid.”

“It reminds me of war,” said Mr. Kanakis, of Doctors of the World. “Before the bombardment, they say, ‘Don’t worry, someone will come and help you.’ ”

He added, “This leaves a very bitter taste in my mouth because we are used to hearing ‘humanitarian help’ as an expression used for third-world countries — not members of the European Union.”

At the Piraeus port, which has operated as a main gateway to Greece and one of the Mediterranean’s major ports since ancient times, Mr. Manisoitis, the importer, said he feared for his family’s business. It survived not only World War II but also a subsequent civil war and Greek dictatorship. But he is not sure it could survive the country’s exit from the eurozone.

For more than a week, a 15-ton shipment of black pepper that Mr. Manisoitis had ordered has been sitting in a cargo container under the baking sun at Piraeus. Although his company has more than enough money in its Greek bank account to cover the €150,000 cost, capital controls are blocking him from sending payment to the supplier in Vietnam.

Even if capital controls were to be lifted next week, the pepper may have rotted by then, he said, so customs officers would prevent him from taking the cargo. Yet he would still have to pay for the spoiled goods.

“We’re losing sleep at night,” Mr. Manisoitis said. “We can’t get the goods. We can’t deliver goods to those who placed orders from us. And we are about to lose even more money.”

He is holding out hope that a Greek exit from the eurozone can be avoided.

But if a deal is not reached on Sunday, Mr. Manisoitis said, “I’m pretty sure Tsipras won’t have a single idea of what to do if we’re out of the euro.”