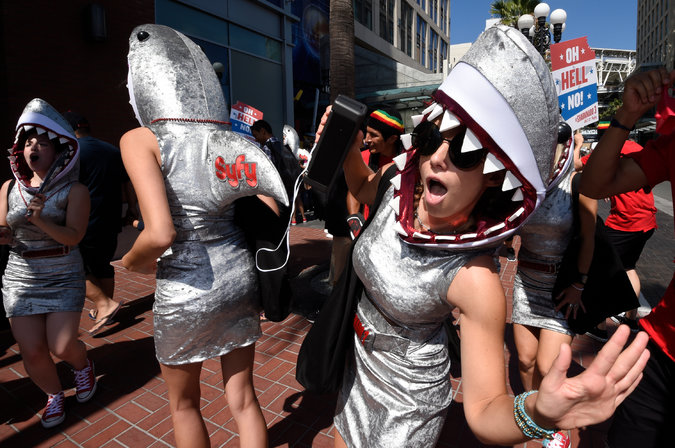 SAN DIEGO — This year at Comic-Con International, the gathering of genre-geek tribes that takes over the convention center and surrounding neighborhoods here for four days every July, you could see a lot of Sadness, a few examples of Disgust, but, at least so far, no Joy.

I’m referring to the characters from the Pixar movie “Inside Out,” of course. Even when they are waiting in line, which is most of the time, Comic-Con visitors seem to be having a pretty good time. A big part of the fun is the costumes, many elaborate and handmade. (“What kind of glue are you using?” I heard someone ask a Power Ranger whose armor plating was coming undone.)

To mingle with the crowds in and around the vast exhibition hall on the center’s ground floor is to be subjected to a 3-D, real-time, live-action tutorial on the state of contemporary pop culture, a pageant of current fan obsessions. You notice the throwbacks and perennials: Spidey and Sailor Moon, Wonder Woman and Dr. Who.

You can also see how quickly certain characters connect with the imaginations of fans, perhaps because they offer something new and necessary, an image or avatar that hadn’t been there before. That seems to be the case with Sadness. On Thursday, the first full day of the event, I spotted at least a half-dozen women in blue makeup, pageboy wigs and oversize glasses with round black plastic frames.

It makes perfect sense that this character, voiced by Phyllis Smith, should be a favorite here. Strictly speaking, the protagonist of “Inside Out,” which takes place mainly in the mind of an 11-year-old girl named Riley, is Joy. She’s the one who undergoes the change and learns the lesson, and speaks in the voice of a bigger celebrity (Amy Poehler). Sadness is nonetheless the movie’s stealth heroine, and her heroism is of an especially resonant kind.

She starts out as a misfit and a scapegoat, bullied and silenced by the aggressively well-meaning Joy and kept at a distance by the other principal emotions. She mopes and mutters and gets in the way. Yet Sadness turns out to be more complicated, more essential, more powerful than she seems at first, and in the end she saves the day.

In other words, her arc is an allegory of Comic-Con itself and of what it has come to represent in its 45 years of existence. The short version is this: A bunch of oddballs — nerds and fanboys, toy collectors and cosplayers, gamers and fantasists — invaded the mainstream and planted themselves at the vital center of the entertainment industry. You can complain about that (I sometimes do), but it’s what happened.

Lately, though, something else has been happening, too — a shift in the ecosystem of fandom symbolized not only by Sadness but also by another new addition to the Comic-Con costume repertory: Imperator Furiosa, the crew-cut, one-armed avenger played by Charlize Theron in “Mad Max: Fury Road.” Furiosa’s presence amid the Disney princesses and Manga pixies is an especially potent sign of the feminism that is a big part of this event.

And perhaps a surprising one. Feminism is not necessarily what you would expect to find at a gathering of action-figure hoarders and superhero worshipers. Stereotypes die hard, and the popular image of a Comic-Con warrior is pale, doughy and male: the Comic Book Guy from “The Simpsons,” and others like him. The hordes in the exhibition hall are, however, remarkably diverse with respect to gender, age, skin color, body type and disability — much more so than any film or music festival I’m acquainted with.

Quite a few panels reflected this variety and grappled with its implications. Nobody is suggesting that a utopian age of sexual and racial equality has dawned in San Diego or anywhere else. The default Comic-Con panelist is still a white man, but it does seem that more of an effort has been made to correct this lazy lopsidedness here than in, say, the Hollywood studios a few hours up the freeway. If the entertainment business is still dominated by interlocking old-boy networks — in the movie studios, the bigger comic-book publishers, the television networks and among the writers, artists and directors those entities employ — the audience is challenging that status quo.

At a packed, lively panel titled “Nobody’s Damsel: Writing for Tomorrow’s Women,” Sam Maggs, author of “The Fangirl’s Guide to the Galaxy” and a contributor to the feminist geek culture site themarysue.com, noted that women and girls made up roughly half of all comic-book buyers, video game players and Comic-Con badge holders. At the same time, she said, only 13 percent of the people professionally involved in making comics and games are women. While this discrepancy is frustrating, Ms. Maggs is optimistic about the capacity of fans to help change it.

“It’s a newly visible thing,” she said in an interview on Thursday afternoon, after the panel had concluded. “All different kinds of people have always liked these stories. Because even though they haven’t always been super-representative in terms of diversity, they are really universal stories. Everyone can identify with them.” Women and nonwhite fans, she added, “have traditionally been shut out of the places where you could discuss” comics and games. “In online message boards, 10 years ago, you would never say you were a woman, because that’s all anyone would talk about. Or you would walk into a comic-book store, and someone would question your cred, and you’d feel like you want to leave. But that’s not the case anymore.”

According to Ms. Maggs, social media has made the difference, though she acknowledged that women were often subjected to harassment and abuse online. “We’re able through places like Twitter and Tumblr to form communities of women and other diverse people in which we feel empowered to say, ‘These are the things that we like,’ and ‘These are the things we’re missing.’ Not only can we say them with a large and loud voice, we can also say them directly to the content creators. So we can go directly to Marvel and directly to DC and say: ‘We have all this money, all this buying power. Why aren’t you catering to us?’ And they kind of have to listen.”