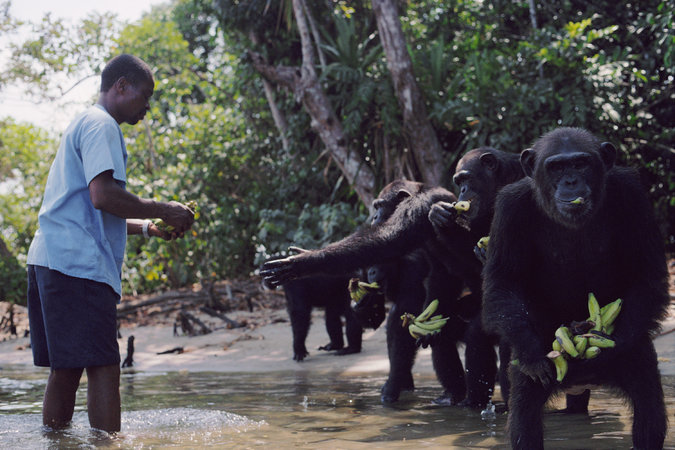 After about 30 years of using a colony of chimpanzees in Liberia for biomedical research, which ended 10 years ago, the New York Blood Center has now withdrawn all funding for them, prompting animal welfare groups to urge the center to reconsider its decision.

For now, the Humane Society of the United States is supporting the chimps, which are owned by the government of Liberia, and is starting a campaign to raise funds for them.

“The New York Blood Center is abandoning 66 chimpanzees and leaving their fate to chance,” said Wayne Pacelle, president of the society. The cost of caring for and feeding the chimps is about $30,000 a month.

Brian Hare, an anthropologist and primatologist at Duke University who is also known for his studies of dog intelligence, started a petition on Change.org to urge people to contact the New York Blood Center.

Mr. Hare said in an email, “I have studied great apes for 20 years in all contexts across the globe — labs, zoos, sanctuaries, the wild” and others. “Never, ever have I seen anything even remotely as disgusting as this.”

Victoria O’Neill, a spokeswoman for the blood center, said officials there would not grant interviews regarding the issue because “there is arbitration going on, brought by the Liberian government.”

A brief statement from the center said it had withdrawn support after “a long period of unproductive discussions with the Liberian government about their responsibilities in this regard, during which time we incurred millions of dollars of costs.”

Ms. O’Neill said the center “never had any obligation for care for the chimps, contractual or otherwise.”

Fatorma K. Bolay, director of the Liberian Institute for Biomedical Research in Charlesville, which cares for the chimpanzees — who live uncaged on six mangrove islands — said that the institute cannot afford to pay for their food and care.

He said the humane society has been paying for food and repairs since March 6, when funding from the blood center stopped, but that caretakers are working for free.

“Why would they walk away from the animals?” Dr. Bolay said about the blood center’s funding withdrawal. “We have to find a solution to take care of these animals.”

The history of the research center, called Vilab II, dates back to 1974, when the blood center contracted with the institute to do research primarily on the hepatitis virus, which survives in blood and posed a threat to the safety of the supply of donated blood. Around this time, the United States banned importation of chimpanzees caught in the wild.

By 2005, the blood center had stopped research on the chimps and started trying to make arrangements for their long-term care. A 2014 Vice documentary, Island of the Apes, chronicled the history of the lab and the islands on which the chimps now live.

But Ms. O’Neill said in an email that this was Dr. Prince’s opinion and was “not authorized or approved” by the blood center. She added that the center “did not ever establish any endowment for animal care, chimpanzees included.”

The humane society hired Agnes Souchal, general manager of the Sanaga-Yong Chimpanzee Rescue Center in Cameroon, to assess the state of the chimpanzees. She said in an interview that there is little to no natural food on the islands and the animals were completely dependent on their caretakers, who were feeding them every other day, though the chimpanzees were still “starving.”

The feeding schedule had not changed, but there was more food in the past, she said.

She said she found chimpanzees “without water.” There is no fresh water on the islands and the water system had broken down. Since Ms. Souchal’s visit, it has been fixed with funds from the United States and international humane societies.

Kathleen Conlee, vice president for animal research at the Humane Society of the United States, said the group is launching a crowdfunding effort on the site GoFundMe to raise about $150,000. “Our long-term goal is to provide these chimpanzees with true sanctuary,” she said. She said at least 16 other animal welfare groups are also calling on the center to reinstate funding.

Dr. Conlee said, “You cannot just use chimps like this and just abandon them and get away with it.”