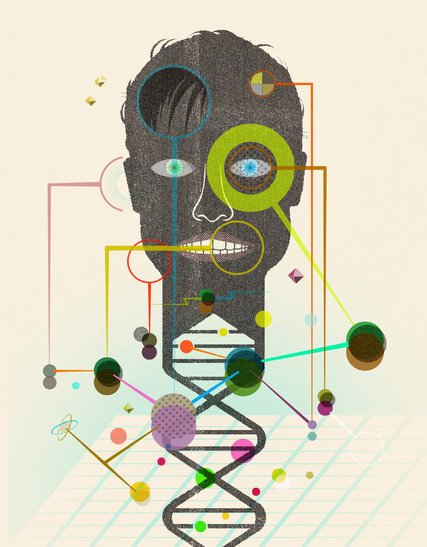 There were no known eyewitnesses to the murder of a young woman and her 3-year-old daughter four years ago. No security cameras caught a figure coming or going.

Nonetheless, the police in Columbia, S.C., last month released a sketch of a possible suspect. Rather than an artist’s rendering based on witness descriptions, the face was generated by a computer relying solely on DNA found at the scene of the crime.

It may be the first time a suspect’s face has been put before the public in this way, but it will not be the last. Investigators are increasingly able to determine the physical characteristics of crime suspects from the DNA they leave behind, providing what could become a powerful new tool for law enforcement.

Already genetic sleuths can determine a suspect’s eye and hair color fairly accurately. It is also possible, or might soon be, to predict skin color, freckling, baldness, hair curliness, tooth shape and age.

Computers may eventually be able to match faces generated from DNA to those in a database of mug shots. Even if it does not immediately find the culprit, the genetic witness, so to speak, can be useful, researchers say.

“That at least narrows down the suspects,” said Susan Walsh, an assistant professor of biology at Indiana University-Purdue University Indianapolis who recently won a $1.1 million grant from the Department of Justice to develop such tools.

But forensic DNA phenotyping, as it is called, is also raising concerns. Some scientists question the accuracy of the technology, especially its ability to recreate facial images. Others say use of these techniques could exacerbate racial profiling among law enforcement agencies and infringe on privacy.

“This is another of these areas where the technology is ahead of the popular debate and discussion,” said Erin Murphy, a professor of law at New York University.

DNA, of course, has been used for more than two decades to hunt for suspects or to convict or exonerate people. But until now, that meant matching a suspect’s DNA to that found at the crime scene, or trying to find a match in a government database.

DNA phenotyping is different: an attempt to determine physical traits from genetic material left at the scene when no match is found in the conventional way. Though the science is still evolving, small companies like Parabon NanoLabs, which made the image in the South Carolina case, and Identitas have begun offering DNA phenotyping services to law enforcement agencies.

Illumina, the largest manufacturer of DNA sequencers, has just introduced a forensics product that can be used to predict some traits as well as to perform conventional DNA profiling.

The Toronto Police Service has submitted DNA from 29 cases dating from the early 1980s through 2014 to Identitas. In 10 instances, the quality of the sample was too poor for any analysis to be done.

In a number of other cases, “it’s enabled us to actually change the direction we were focused on originally,” said Detective Sergeant Stacy Gallant, a cold-case homicide investigator. But there have been no arrests or convictions as a result, he said.

Gender has long been ascertained from crime scene DNA. About 15 years ago, some police departments began trying to determine the geographic ancestry of suspects, as well, by using tests like the ones consumers order to learn about their genetic heritage.

In 2003, such information helped redirect the search for a serial killer in Louisiana. Police had been looking for a white man based on a witness account and on psychological profiles.

But DNA found at the site of one of the murders indicated the person’s ancestry was 85 percent sub-Saharan African. Eventually, a black man was convicted of the crimes.

Now researchers are closing in on specific physical traits, like eye and hair color. A system called HIrisPlex, which was developed at Erasmus University MC Medical Center in the Netherlands, is about 94 percent accurate in determining if a person has blue or brown eyes, but less so with intermediate colors like green, said Dr. Walsh, who helped develop the technology.

HIrisPlex, which analyzes 24 genetic variants, is about 75 percent accurate for hair color, which can change as a person ages, she said.

Scientists look for genetic variants associated with physical traits the same way they look for genes that might cause disease: by studying the genomes of people with or without the trait or the disease, and looking for correlations. But this can be a complex task.

Many genetic variants may be associated with a trait, but each may make just a small contribution. Studies of twins, for instance, suggest that height is 80 percent determined by genetics, said Manfred Kayser, a professor of forensic molecular biology at Erasmus.

But while one study found about 700 genetic variants linked to height, they explained only about 15 percent of variation from person to person, he added.

On the other hand, eye and hair color have proved relatively easy to ascertain from DNA samples, Dr. Kayser said, because a single gene has a large influence on these traits.

Predicting a suspect’s age is not out of the question, either by analyzing markers that shut off certain genes as people grow older, he said.

But many of these techniques were developed by studying Europeans and might not work as well elsewhere in the world, said Kenneth Kidd, a professor of genetics at Yale.

He and other experts are skeptical that faces, which are very complex, can be determined from DNA. While inheritance clearly plays a big role – identical twins look alike, obviously, and people resemble their close relatives — some experts say not enough is known yet about the relationship between genes and facial features.

“A bit of science fiction at this point,” said Benedikt Hallgrimsson, the head of cell biology and anatomy at the University of Calgary, who studies the development of faces.

The critics noted that Parabon, which is based in Reston, Va., and has received grants from the Defense Department, had not published information in peer-reviewed journals validating its methods, even though such a publication would increase sales.

Parabon announced last week that a well-known outside expert would conduct a validation study that could be published. Ellen McRae Greytak, Parabon’s director of bioinformatics, said the company’s technique was based partly on the work of Mark D. Shriver, a professor of anthropology and genetics at Penn State University, who published his methods last year.

Dr. Shriver and his main collaborator, Peter Claes of KU Leuven in Belgium, have developed a complex mathematical method to represent faces, based on measuring the three-dimensional coordinates of more than 7,000 points on the face.

They developed a way to create a sort of generic face based on the person’s sex and ancestry mix, as determined from their DNA. They then adjust that face based on 24 genetic variants in 20 genes shown to be involved in facial variation.

The researchers said in their papers that their ancestry and gender analysis explained only about 23 percent of the variation in faces and that the genetic variants did not really add much detail. But the technique is in early development and they have since added many more genetic variants to try to improve the accuracy. Some of the images generated look similar to the actual face of the DNA donor, others less so.

Some of the images generated from their technique, which they call “molecular photofitting,” look similar to the actual face of the DNA donor, others less so.

But law-enforcement agencies sometimes have few good options in homicide cases. In the Columbia, S.C., case, the police were at a standstill in their investigation of the January 2011 murder of 25-year-old Candra Alston and her 3-year-old daughter, Malaysia Boykin, in their apartment.

There were no signs of forced entry, suggesting Ms. Alston knew her killer. More than 100 acquaintances voluntarily provided DNA samples, but none matched that found at the crime scene.

So four years later, on Jan. 9, the police released an image developed by Parabon of a “person of interest.”

“We thought it was worth a shot,” said Mark Vinson, a police investigator, who said the department paid Parabon $4,200 and had not independently vetted the technology.

The release of the image generated a couple of leads, he said, but neither panned out.

Law enforcement authorities say that information about physical traits derived from DNA is not permitted in court because the science is not well established. Still, the prospect of widespread DNA phenotyping has unnerved some experts.

Duana Fullwiley, an associate professor of anthropology at Stanford, said that she worried that use of such images could contribute to racial profiling. She noted that Dr. Shriver developed his system by analyzing the DNA and faces of people with mixed West African and European ancestry.

“This leads to a technology that is better able to make faces that are African-American,” she said. The image produced in the South Carolina case, Dr. Fullwiley added, “was of a generic young black man.”

Dr. Shriver said he initially studied people of mixed European and African ancestry, many of them from Brazil, because that made the analysis easier. His more recent research has involved people of many different ethnicities, he said.

Conventional DNA profiling, used for matching, does not rely on DNA linked to characteristics of the person, other than sex. Until now, that had helped blunt concerns that forensic use of DNA would violate the Fourth Amendment protection against unreasonable searches, said Ms. Murphy, the law professor.

But the use of DNA to determine physical traits “completely dissolves that firm boundary,” she said.

It also opens up a new set of questions: What traits are off limits? Should the authorities be able to test whether a suspect has a medical condition or is prone to violence should such testing be possible?

Belgium and Germany do not allow forensic DNA phenotyping. The Netherlands restricts it to predicting traits that are publicly visible, like hair and eye color.

In the United States, some states prohibit testing to determine if a person has a medical condition or propensity for a disease, Ms. Murphy said. But those laws mainly pertain to samples taken from a known person, such as those in a DNA database.

Crime-scene DNA, however, is legally considered abandoned material. “There’s pretty much no law on what you can do to a crime scene sample,” Ms. Murphy said.