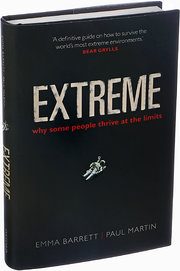 “Funny thing happened on the way to the Moon: not much,” wrote the astronaut Gene Cernan in his memoir about life in NASA’s space program.

Space travelers aren’t the only ones killing time. During their free climb of the Dawn Wall in Yosemite National Park in California, Tommy Caldwell and Kevin Jorgeson spent a large part of many days waiting for shade to hit the wall so they could begin to climb. One study of explorers scaling a Himalayan peak found that they spent a mere 4 percent of their time actually climbing.

A yearning for novelty and sensory stimulation may draw people to extreme activities, but these pursuits inevitably require long periods of boredom, the psychologists Emma Barrett and Paul Martin write in “Extreme: Why Some People Thrive at the Limits,” (excerpt) an intriguing examination. Dr. Barrett and Dr. Martin investigate the challenges facing extreme adventurers, and the traits and skills needed to overcome them.

If tedium is an unexpected challenge, sleep deprivation is all too familiar. As they orbit Earth, astronauts witness 16 sunrises every day, a disruption to their circadian rhythms and sleep cycles. (It’s no wonder that sleeping pills are the most commonly used medications in space.) Successful adventurers often adopt a strategy of tactical napping, the authors note, sleeping in short bursts when the opportunity arises.

In 2001, Ellen MacArthur crossed the finish line of the Vendée Globe sailing race having taken 891 naps, an average of 36 minutes each, during her 94-day solo trip around the world in an 18-meter yacht.

Sleep deprivation can make risky endeavors even more dangerous by compromising judgment. People are more prone to risk-taking behavior when they’re sleep deprived, yet they fail to recognize their impairment and instead perceive themselves as more cautious.

A study of participants in a trans-Atlantic sailing race found that sleep deprivation left them tired to the point of feeling drunk. No surprise, then, that these sailors made mistakes, like leaving equipment in the wrong place and, in one instance, causing a collision.

While planning expeditions, extreme adventurers often worry about what could go wrong. But the anxiety often dissipates once they embark, the authors write, and some seek high-stakes pursuits as an antidote to ordinary life.

In her autobiography, the record-chasing cave diver Vera van Schaik wrote that diving helped her escape from a personal life filled with stress and fear: “Diving was a place of peace and calm in which I excelled.”

One study comparing mountaineers to practitioners of the lower-risk sport of judo found that the peak climbers had higher baseline levels of anxiety in their lives, and the intense focus required by their pursuit exerted a calming effect that judo athletes didn’t experience.

Successful adventurers are rarely fearless nor overly afraid. Instead, they score high in a trait called self-efficacy — a belief in one’s competence. Psychological assessments of American astronauts in the 1960s found that they were confident in their ability to overcome realistic threats “and not given to dwelling on unrealistic ones,” Dr. Barrett and Dr. Martin write.

Excelling in risky situations requires a level-headed response when things go awry because, in the words of the astronaut Chris Hadfield, “No matter how bad a situation is, you can always make it worse.”

People who are experienced in functioning in high-stakes environments are more likely than those who aren’t to make correct inferences about dangerous situations, because they don’t just pay attention to details — they pay attention to the right details. “Where an experienced mountaineer notices different textures of snow, a novice may see only an expanse of whiteness,” Dr. Barrett and Dr. Martin write.

Still, even seasoned adventurers can fall victim to cognitive biases that lead them astray.

Mountaineers are notoriously prone to “summit fever,” during which they misjudge or dismiss risks in their rush to reach a summit. This mistake often results from “sunk-cost bias,” Dr. Barrett and Dr. Martin write: Climbers feel too heavily invested in the expedition to turn around, even in the face of clear danger.

The authors convey tales of extreme adventure with the authoritative, detached voice of experts recounting case studies, insisting — frustratingly — on closing each chapter with an academic summary. But this approach hardly detracts from the book’s appeal. No aspect of extreme adventuring is left unexamined, and the reader comes away with a deep understanding of why and how people thrive at the edges.

”Extreme” ends with a fascinating exploration of how people leave these pursuits behind. Life-endangering activities often become life-defining ones, and the decision to move on may lead to an identity crisis.

When the astronaut Buzz Aldrin retired from space travel, he was 39 and “had decades in front of him but no idea what to do with them,” the authors write. He worked as a flight instructor and did public appearances, but struggled with depression and alcoholism.

Research shows that the transition to normal life is made easier if the person receives social support and can create a new identity. That was true for Aldrin, who credits the support of his third wife and an acceptance of his new role as an ambassador for space travel with helping him overcome his personal demons and finally settle into a life after NASA.

Despite the challenges, most people who retire from extreme activities look back on their adventures with fondness and satisfaction, Dr. Barrett and Dr. Martin write. When they live to tell the tale, it’s usually one of resilience and personal growth.