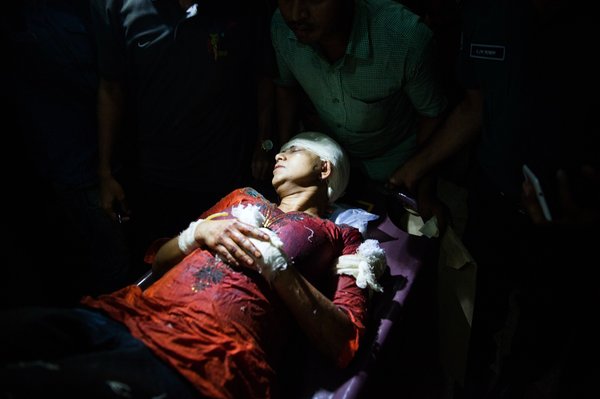 DHAKA, Bangladesh — A Bangladeshi-American blogger known for his antipathy to religion was hacked to death on the street in this capital city by two assailants wielding machetes, the police said on Friday.

The victim, Avijit Roy, 42, was leaving a book fair with his wife on Thursday evening when his attackers approached him from behind, according to the police. His wife, Rafida Ahmed Bonya, 45, suffered a blow to the head and was in critical condition in a Dhaka hospital, said Sirajul Islam, an officer at the Shahbag police station, where Mr. Roy’s father reported the assault. The police said they had recovered two bloodied machetes from the scene of the crime.

Jibon Ahmed, a photographer for a local photo agency, said by phone that he heard screams outside the fair around 9 p.m. After finding the couple, he said, he helped them into an autorickshaw and took them to the hospital, where Mr. Roy died.

The police have not named any suspects, but Mr. Islam said that witnesses had provided descriptions of the attackers.

Mr. Roy, an American citizen, was a prolific writer on secularism and condemned religious extremism, particularly through his blog, Mukto-Mona, which is Bengali for Free Mind. He also wrote on the website of the Center for Inquiry, an organization based in the United States dedicated to humanist thinking and critiques of religion.

In a recent article, Mr. Roy described the release of his 2014 book, “Biswasher Virus,” Bengali for “The Virus of Faith.”

“The death threats started flowing to my email inbox on a regular basis” after the book came out, he wrote. One extremist, he wrote, “issued death threats to me through his numerous Facebook statuses.” In one of those threats he said the extremist wrote: “Avijit Roy lives in America and so, it is not possible to kill him right now. But he will be murdered when he comes back.”

Michael De Dora, the director of the Center for Inquiry’s office of public policy, expressed sadness at Mr. Roy’s death in a statement on the center’s website.

Krishna Pada Roy, a deputy commissioner of detectives with the Dhaka Metropolitan Police, said on Friday that the police were investigating various possible motives for the killing, including extremist zeal.

In 2013, another Bangladeshi blogger, Rajib Haider, was killed by unknown attackers. He had been a leading organizer of a series of protests that year demanding harsher punishment for perpetrators of crimes in Bangladesh’s 1971 war for independence. He was also a fierce critic of the Islamist political party Jamaat-e-Islami.

In 2004, Humayun Azad, a prominent writer and a teacher at Dhaka University, was seriously wounded in a machete attack when he was returning from the same book fair that Mr. Roy had attended, according to local news media reports.

Activists and intellectuals gathered at Dhaka University on Friday to protest Mr. Roy’s death and demand action against those responsible.

Parvez Alam, a Bangladeshi blogger who has written for Mukto-Mona, described Mr. Roy as “one of the most talented writers of our country.”

“This has been going on in Bangladesh,” he said by phone. “The bloggers have different religious viewpoints and we’re being attacked again and again, and we’re not getting justice.”

“Using religion in the attempt to resist freethinking will not be accepted,” Khushi Kabir, a rights campaigner, told The Dhaka Tribune.