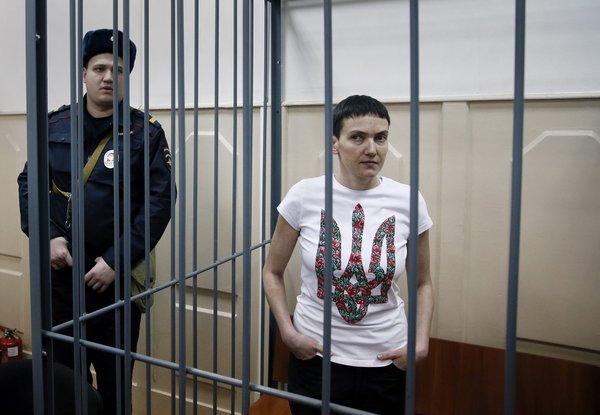 MOSCOW — Of the hundreds of prisoners of war captured during the nearly yearlong fighting in eastern Ukraine, only one was mentioned by name on the agenda of world leaders at peace talks in Minsk, Belarus: Nadiya V. Savchenko, a former lieutenant in the Ukrainian military, helicopter navigator and graduate of Ukraine’s Air Force Academy.

Ms. Savchenko, 33, is not being held in eastern Ukraine by Russian-backed separatists. She is in a Moscow prison, charged by Russia in connection with the deaths of two Russian journalists in a mortar strike in Ukraine last June while covering a war that the Kremlin has long insisted does not involve Russia or its military.

As the leaders in Minsk announced on Thursday that they had reached a broad agreement for a cease-fire and weapons pullback in eastern Ukraine, there was also a specific proviso for Ms. Savchenko’s release. President Petro O. Poroshenko of Ukraine, for whom winning the pilot’s freedom had become a priority, announced the condition at a news conference and said there was an understanding that she would be freed.

How Ms. Savchenko ended up in a Russian jail, facing charges by the Investigative Committee, the main national criminal investigations agency in Russia, is disputed.

She was first detained in a prison in Voronezh, Russia, near the Ukrainian border, after she had participated in attacks on Russian separatists in Luhansk, Ukraine, and a battle near the town where the Russian journalists were killed, said Vladimir Markin, a spokesman for the Investigative Committee. She then crossed voluntarily into Russia, he said.

“It turned out that she crossed the Russian border without documents, posing as a refugee,” said Mr. Markin, adding that Ms. Savchenko was detained during a routine check of documents by the authorities.

The Ukrainian government said, however, that Ms. Savchenko was captured by rebel forces and transported to Russia.

Nikolai Polozov, one of Ms. Savchenko’s lawyers, said that his client had participated in the protests in Kiev, the Ukrainian capital, last year that ousted the country’s president, Viktor F. Yanukovych, and that she had helped carry medicine to protesters wounded by gunfire.

As war broke out in eastern Ukraine, Ms. Savchenko took leave several times from the army to travel to the Donetsk and Luhansk regions, Mr. Polozov said. On the morning that the two Russian journalists were killed, Mr. Polozov said, Ms. Savchenko was wounded in an artillery fight, and she and several others were captured. He said cellphone records proved that she was caught at least 30 minutes before the mortar fire that killed the journalists.

He added that Ms. Savchenko was held for two weeks in a gymnasium somewhere in Luhansk before being taken across the border and turned over to the Russian authorities.

Even before the war, Ms. Savchenko was a national hero for being one of Ukraine’s first female combat pilots, and was the subject of a documentary. She had combat experience in Iraq, where she served as a paratrooper with a Ukrainian contingent supporting the American-led war effort, and then used that experience to pressure the Ukrainian military into admitting her to the Ivan Kozhedub Air Force University in Kharkiv for pilot training.

She has been similarly steel-willed in prison. She has been on a huinger strike in recent weeks and has repeatedly castigated the Russian government for her detention, at times insisting on speaking only Ukrainian in court.

At one hearing, she used a speaking opportunity to address the television cameras more than the judge. “I’m tired of Russia’s lies, your deceitful judges and your dishonest media,” she said.

Since her detention, she has been elected to the Ukrainian Parliament as a member of the Fatherland party, led by former Prime Minister Yulia V. Tymoshenko. Last month, other lawmakers from the party wore T-shirts to Parliament that read, “Free Nadiya Savchenko.”

As a result of the cease-fire agreement in Minsk, it seems that they might get their wish. Mr. Poroshenko said at the news conference that there was a provision for all prisoners of war to be set free within 19 days.

But Aleksei K. Pushkov, a prominent Russian lawmaker, cautioned that Ms. Savchenko’s release was not a foregone conclusion.

“There is no automatic mechanism to free a person accused of being accomplice to murder, in this case of a Russian journalist,” Mr. Pushkov said.

As of Thursday afternoon, there was no indication of Ms. Savchenko’s release, Mark Feygin, another lawyer for Ms. Savchenko, said by telephone. “As long as Putin or someone trusted by him does not confirm this information, we can only speak about it theoretically,” he said.