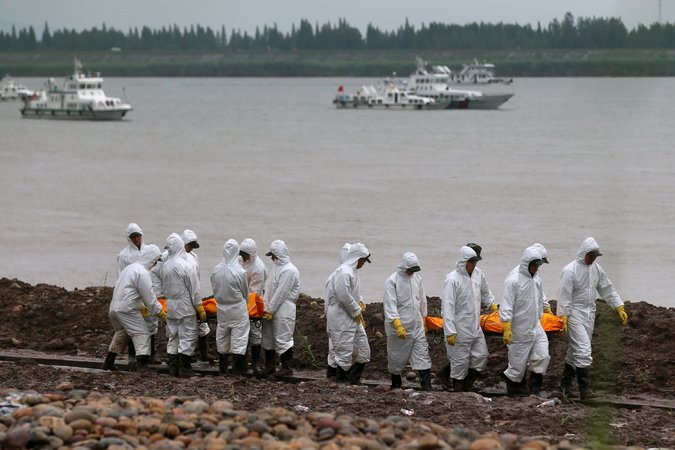 HONG KONG — In a show of openness on Wednesday, the Chinese government allowed a handful of reporters to visit the scene of rescue efforts on the Yangtze River, where a cruise ship with 456 passengers and crew had capsized more than a day earlier.

But the time of transparency was brief. Police checkpoints prevented access to the river and movement through parts of the nearby town of Jianli. Hotels were told not to accept journalists unless they had registered at a media center run by local propaganda officials. Likewise, the police blocked journalists’ access to local hospitals.

China sought to maintain a tight grip on information about the disaster on Wednesday, even as hopes dimmed for the hundreds of people aboard who remained missing, and as new questions emerged about the ship and the captain’s decision to sail into a storm.

He Jianzhong, vice minister of transportation, told reporters at the main rescue site that the operation may shift to lifting the ship out of the river, but that would require five large cranes. One was already on site at midday Wednesday. Of the 456 people who were on the ship, 14 had been rescued and 26 deaths had been confirmed, CCTV reported Wednesday evening.

The ship, the Oriental Star, was one of six vessels that were detained in 2013 for unspecified violations as part of an effort to improve the safety of ships on the Yangtze River, according to a document posted online from the Nanjing Maritime Safety Administration.

The Chinese news media operate under strict controls, though disasters can offer a window of freer reporting — sometimes just a day or two, during which aggressive reporters can produce hard-hitting work before the censors decide where to draw the line. But after the Oriental Star capsized during a storm late Monday, the media controls fell swiftly into place.

Images and reporting from the site of the overturned ship were largely limited to state media outlets for the first 24 hours. A propaganda directive ordered domestic media not to send reporters to the scene and to rely on reports from “authoritative media,” namely the state-run Xinhua news agency and China Central Television, according to China Digital Times, a website based in Berkeley, Calif., that monitors Chinese media and online discussion.

In the current climate of tight media restrictions pushed by President Xi Jinping, even traditionally aggressive outlets have been reined in, said Xiao Qiang, China Digital Times’ editor in chief and an adjunct professor at the University of California, Berkeley. “Now it’s much, much more restricted,” he said.

Some domestic journalists from outlets besides Xinhua or CCTV have shown up at the scene of the disaster, but their reporting has been curtailed. More than a day after the Oriental Star capsized, only one of the 14 survivors has been quoted in the news media, and only by Xinhua. The ship’s captain and chief engineer have been detained, but the authorities have said nothing about whether they were warned of weather conditions, how they escaped the ship and whether they radioed for help or ordered passengers to evacuate.

Some evidence emerged suggesting that the captain, Zhang Shuwen, may have taken the vessel into harm’s way even as other ships took precautions against what by all indications was a violent storm. The local weather bureau had issued a “yellow warning,” and at least two other ships in the vicinity appear to have stopped because of the weather, according to government satellite data and interviews with passengers.

Whereas rescue efforts after the TransAsia Airways crash in Taiwan in February or the sinking of the Sewol ferry in South Korea last year were broadcast on live streaming video, video of the Oriental Star response has come almost exclusively from edited CCTV footage. The front pages of many Chinese newspapers and foreign newspapers, including The New York Times, carried the same Xinhua photo of a 65-year-old woman being rescued.

Recent disasters in China have set off public criticism of the government and demands that officials take responsibility for shortcomings, such as poorly built schools that collapsed during the 2008 Sichuan earthquake and the rapid expansion of high-speed rail, which some saw as contributing to a deadly train crash in the eastern city of Wenzhou in 2011.

Li Datong, a former newspaper editor in Beijing, said that coverage was being strictly controlled despite the fact that the political implications of this incident seemed much more limited. “This isn’t especially sensitive,” he said. “It’s a disaster and there’s nothing people can do. In a few minutes the ship turns over.”

In Chinese media reports, the questions have focused on the ship and the decisions of the captain.

The Beijing News, a relatively liberal daily in the Chinese capital, raised a series of questions in its Wednesday edition, including whether there should have been more advance notice of the storm, whether the ship was too old or overloaded, why it took more than an hour to alert the authorities after the ship sank, and how the captain managed to survive when so many others did not.

Alternative sources of information and discussion on Chinese social media have been extremely limited, in part because of continuing clampdowns on freewheeling discussions online, Mr. Xiao said. The phrases “Oriental Star” and “shipwreck” were the most-censored search terms on the Sina Weibo microblog platform, according to the monitoring site freeweibo.com.

Premier Li Keqiang, who flew to the disaster scene Wednesday, ordered the thousands of rescuers to focus their efforts on saving lives. But with so few rescues to report on, Mr. Li’s activities received even more detailed coverage than normal. Xinhua photos showed him surveying the river with binoculars, bowing in the rain before recovered bodies, holding planning meetings and eating lunch from a box.

Guan Dong, a navy diver who rescued a 21-year-old crew member, was also covered extensively. He said he was following orders to prioritize human life when he offered his diving mask and breathing apparatus to help the young man escape an air pocket in the upturned ship.