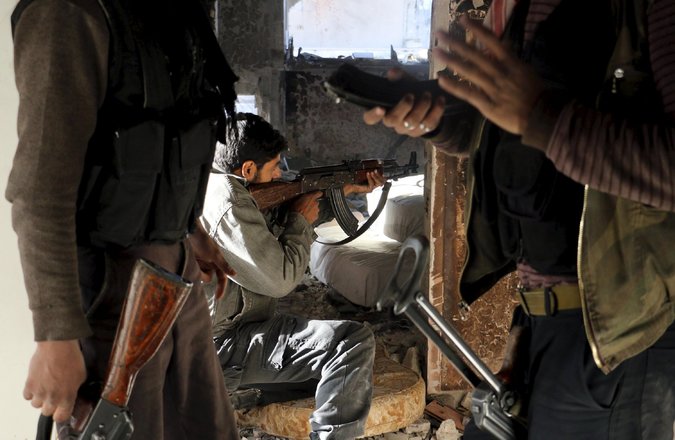 BEIRUT, Lebanon — The Syrian Army has suffered a string of defeats from re-energized insurgents and is struggling to replenish its ranks as even pro-government families increasingly refuse to send sons to poorly defended units on the front lines. These developments raise newly urgent questions about the durability of President Bashar al-Assad’s rule.

“The trend lines for Assad are bad and getting worse,” said a senior United States official in Washington, who nevertheless cautioned that things have not yet reached “a boiling point.”

The erosion of the army is forcing the government to rely ever more heavily on Syrian and foreign militias, especially Hezbollah, the Lebanese Shiite group allied with Iran. Hezbollah now leads or even directs the fight in many places, angering some Syrian officers, said several Syrian soldiers, and also the senior United States official and a Syrian with close ties to the security establishment, both of whom spoke on condition of anonymity to discuss confidential intelligence assessments.

This month, government forces have crumbled or fled in areas long cited by officials as markers of enduring state control. Insurgents seized Idlib, a northern provincial capital, and the lone working border crossing with Jordan in the south. Counteroffensives failed, and advances this week have brought a newly cohesive insurgent coalition closer than ever to Mr. Assad’s coastal strongholds. The coalition consists mainly of Islamist groups that include Qaeda’s Syrian affiliate, the Nusra Front, but oppose the Islamic State.

Throughout the country, there are signs of strain that contrast with Mr. Assad’s public confidence. The government recently dismissed the heads of two of its four main intelligence agencies after they quarreled; one later died, reportedly after being beaten by the other’s guards.

Officials in provincial capitals like Aleppo and Dara’a are making contingency plans to preserve cash and antiquities and evacuate civilians. Foreign exchange reserves, $30 billion at the start of the war, have dwindled to $1 billion.

The already-crowded coastal provinces are straining with new arrivals from Idlib, with some saying officials have turned them away. In central Damascus, checkpoints are fewer and more sparsely staffed, as militiamen are sent to fight on the outskirts, and young men increasingly evade army service.

Even in areas populated by minority sects that fear hard-line Islamist groups like Nusra and the Islamic State — such as Druse in the south, Assyrian Christians in the north, and Ismailis in Hama — numerous residents say they are sending their sons abroad to avoid the draft, or keeping them home to protect villages.

That has accelerated the transformation of Syria’s once-centralized armed forces into something beginning to resemble that of the insurgents: a patchwork of local and foreign fighters whose interests and priorities do not always align.

Four years ago, Syria’s army had 250,000 soldiers; now, because of casualties and desertions, it has 125,000 regulars, alongside 125,000 pro-government militia members, including Iranian-trained Iraqis, Pakistanis and Afghan Hazaras, according to the senior American official in Washington.

And Syrians are not always in charge, especially where Hezbollah, the best trained and equipped of the foreign militias, is involved.

“Every area where there is Hezbollah, the command is in their hands,” said the Syrian with security connections. “You do something, you have to ask their permission.”

That, he said, rankled senior security officials who recalled the rule of Mr. Assad’s father, Hafez, in the 1980s, when Hezbollah’s patron Iran was the junior partner in the alliance with Syria.

An official in the region sympathetic to Hezbollah said that enemies were trying to exploit natural tensions that “happen between allies, and between brothers and sisters in the same house,” but would not succeed.

“Even if Hezbollah does battle alone, it is with Syrian approval,” said the official, who spoke on the condition of anonymity to discuss internal deliberations. “Hezbollah is only a stone that helps the builder.”

But others see a loss of Syrian sovereignty to Iran, which needs Syria as a conduit to arm Hezbollah. Charles Lister, a Syria expert at the Brookings Doha Center in Doha, Qatar, said Iran with the help of Hezbollah and other militias is building “a state within a state in Syria — an insurance policy to protect itself against any future Assad demise.”

Ali, 23, a soldier on leave in Damascus from the southern front, said one of his officers, a major, had complained that any Hezbollah fighter was “more important than a Syrian general.”

A student who recently fled Damascus after being constantly stopped at checkpoints to prove he is not a deserter, said that Hezbollah now runs his neighborhood in the old city, and once helped him solve a problem between his brother and security forces. (Syrian police, he said, are so little seen that people now smoke hashish openly.)

“If you have Hezbollah wasta,” or connections, he said, “your problems will be solved.” The student identified himself only as Hamed Al Adem, a name he uses as a performance artist, to protect family members still in Damascus.

Even so, Hezbollah is not in a position to bail out Mr. Assad the way it did in 2013, when it sent hundreds of fighters to crush the insurgent hub of Qusayr, near the Lebanese border.

Hezbollah now has more fighters and advisers in Syria than ever, about 5,000, American intelligence officials said. But, said the Syrian with security connections, they “only interfere in areas that are in their own interests.”

The official sympathetic to Hezbollah said it has “maybe thousands” of fighters along the Lebanese border, hundreds in the south, bordering Israel, and only dozens around divided Aleppo, Syria’s largest city.

It had none in Idlib city, which he said may have fallen because some Syrian officers failed to correctly assess threats.

The Syrian with security ties said the leadership had not made a priority of defending Idlib. Many government troops, he said, fled after insurgents knocked out their communications network and called “God is Great” from the mosques.

“Damascus and the Syrian coast, other than this nothing is important. Nothing,” he said, adding of Mr. Assad: “He doesn’t give a damn if Syria is destroyed.”

One long-serving soldier said his cousin called from a hastily dug foxhole near Idlib to send shaky goodbyes to his mother. The soldier, who serves on another front and has lost an uncle and a cousin in battle, was enraged to hear that the 10 men pinned down there lacked even a vehicle to flee.

“If I have a kid, I won’t send him to the army,” he declared, complaining that his monthly pay covers just 10 days’ worth of expenses. “Why be killed or slaughtered?”

In Sweida, the mostly pro-government, mostly Druse southern province, “In every single house there is one man at least wanted for the army service,” said Abu Tayem, a Druse activist there.

Last week, he said, after a friend of his was arrested for evading the army, residents attacked security officers, captured one and traded him for the prisoner. Recently, the government tried to recruit Druse forces to be trained by Hezbollah, but few signed up after hearing they would be asked to fight Sunnis in neighboring Dara’a.

To enlist at this point would be foolish, not to speak of dangerous, said Majed, 19, a Druse whose father helped him evade the draft. “When the regime is gone, then our neighbors will be our enemies,” he said.

Fayez Korko, 48, said he helped organize an Assyrian militia in northeastern Syria after villagers concluded that the government’s promises of protection were “empty words.” He called the government “the best of the worst” — better than extremist Islamists — but said that Assyrians would rather die defending their villages than on faraway fronts.

Events like the fall of Idlib, said the Syrian with security ties, are frustrating even a core government constituency — minority Alawites, who belong to Mr. Assad’s sect and disproportionately serve in the military. They are beginning to doubt that the president can protect them, as they gambled in sticking with him for an existential fight, said the Syrian, who is Alawite.

“Syria is not you,” he said, addressing Mr. Assad, “and you are not Syria.”