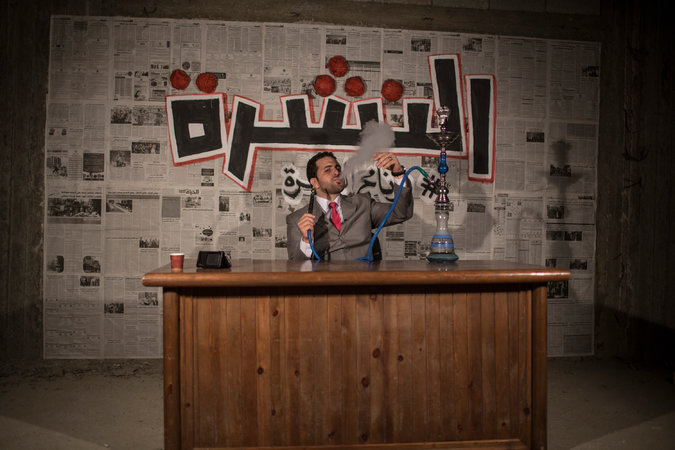 GAZA CITY — Men and women stood with suitcases at the port, waiting for a boat. Suspicious, Tarek, a 13-year-old tea seller, wandered over and asked, “Are they really leaving?” He had never seen anyone leave Gaza before, he explained.

As it turned out, his suspicions were well founded. The passengers were actors in a new satirical video series, and they were pretending to wait for a boat called “Mish-mish,” Arabic for “apricots.” It was a reference to a Palestinian saying, “tomorrow with the apricots,” which means, basically, never.

It was also a jab at Gaza’s Hamas rulers, who had vowed to build a new port for maritime travel but never followed through. And it underscored the restrictions on Palestinians in Gaza, because neighboring Egypt and Israel allow only a trickle of people to leave the tiny coastal enclave, and do not allow them to travel by sea.

“Get it? The boat is never arriving!” Akram al-Sourani, 33, the scriptwriter, said with a booming, snorting laugh. Tarek, the tea seller, did not get it.

Introducing satire to Gaza’s residents is one of the challenges facing three Palestinian men preparing the show, “The News Program,” which was inspired by a satirist who modeled his own television show in Egypt on “The Daily Show With Jon Stewart.”

In bringing the show to the airwaves, they have faced an array of challenges — finding the sheep whose bleating interrupted the filming, for one. But towering over all of them is the question of how Gaza’s Hamas government will react. Although the producers promise to skewer all Palestinian officials equally, the show is made in Gaza, where Hamas officials have clamped down on independent media.

“We’ve thought a hundred times about what will happen if we do this,” said Mohamed Alsawafiri, 31, the presenter, in real life an aid worker and father of three daughters. “If we are afraid, we can’t do anything.”

The first episode is a thick brew of dark Gaza humor, relying on inside jokes and the eyebrows of Mr. Alsawafiri, which he wiggles to comic effect. Its creators intend to make weekly 15-minute episodes, released to YouTube.

“We want to raise awareness of Palestinians through satire,” said Mr. Sourani, the scriptwriter. “The laughter should come with a sigh of pain.”

Hamas’s promise to build a seaport provides fodder for the first episode.

Another segment swats the Palestine Liberation Organization, a once-revolutionary organization now peopled by aging men representing tiny parties and headed by Mahmoud Abbas, the president of the Palestinian Authority, who turned 80 this year.

As Mr. Alsawafiri spoke of the P.L.O. in his fake news studio, a generic photograph of elderly men flashed. He pretended to look panicked at the mistake — how could he not know his beloved leaders?

“Take that down!” he whispered, seemingly to the director. “You don’t want us to get shut down!”

Another photo flashed in its place, one of the actual P.L.O. leaders, also older men. “Oh there you are,” Mr. Alsawafiri said, looking relieved. “Good evening, boys.”

In another, a heavily bandaged man emerged from the rubble of Shejaiya, a neighborhood of Gaza City that was bombed in the war between Israel and Hamas last summer, to announce an independent republic.

The announcement was a sly dig at the Hamas government in Gaza, and Mr. Abbas’s government in the West Bank. They have not reconciled since a short civil war in 2007, when Hamas drove Mr. Abbas’s Fatah out of Gaza, following a failed unity government after Hamas’s victory in the 2006 Palestinian legislative elections. Palestinians have two governments, the wounded Shejaiya man suggested, but they do not have a state.

Several hundred Gazans attended a screening of the inaugural show held in Gaza City’s Y.M.C.A. on June 10. They cheered and laughed during the program, nodding as they watched the young Gaza residents wait for the “Mish-mish,” the apricots boat.

“We are sick of wars and politicians,” said Suha Ahmad, a young woman. The program, she said, “was different and brave. It touches on people’s concerns.”

Three men arrived at the screening in a vehicle typical of security officials and kept to themselves. One of them held a small camera, filming the event.

Filming the show was its own challenge.

On a recent day, the crew drifted into the studio, a converted bare-bones apartment, the window frames covered with sheets. One wall was plastered with the show’s slogan. But someone forgot the script; an argument ensued.

Then the film crew fired up the generator; the power was out. For years, Gaza has had hourslong power failures, exacerbated by Israel’s bombing during the war of its main generator, which is still unrepaired.

Interrupted by background noise, Mr. Alsawafiri needed about a dozen takes for one headline.

The director glared at Jehad Abu Shanab, 23, the producer, who was sucking in smoke from a water pipe, causing a loud gurgling sound.

In the middle of another take, an assistant walked in. “Tea, coffee?”

Then the sound of bleating crept in.

“Are there sheep in the next room?” Mr. Alsawafiri asked.

The crew members shrugged, waited for the bleating to fade, and then resumed filming.

“The News Program” rides on the cultural tail end of the Arab Spring. It traces its inspiration to Mr. Stewart via his Egyptian disciple Bassem Youssef, who once hosted a popular satirical news show in Egypt.

Mr. Youssef’s show was emblematic of a new freedom in post-revolutionary Egypt. But he pulled it off the air last year amid growing intolerance to political satire after the military deposed the elected Muslim Brotherhood government, and the army chief, Abdel Fattah el-Sisi, became president.

Mr. Youssef’s satire stuck with Mr. Alsawafiri, who wanted a way to channel his growing resentment of Palestinian leaders, prompted by watching the miserable fate of his brother, whose legs were severed in a blast during an Israeli raid in 2006.

He found a match in Mr. Sourani, a well-known writer in Gaza.

Mr. Sourani became prominent six years ago, when friends began sharing his blistering Facebook posts about Palestinian politics. He is a lawyer by profession, married with two children.

He now has a Facebook page for his writing, with over 5,700 likes, and has written two books of satire.

Although Mr. Sourani is normally accessible through Facebook, he did not answer repeated messages from Mr. Alsawafiri to meet.

Mr. Sourani feared the messages were from one of his critics, some of whom have sent him death threats. He answered Mr. Alsawafiri’s calls only after a mutual friend assured him it was safe.

Gaza’s Hamas rulers have more or less tolerated Mr. Sourani and his writing. He has been questioned a few times, he says, but nothing more. “If there was real censorship, I wouldn’t be here today,” Mr. Sourani said.

But he is concerned about the video series, which will draw a far larger audience. Some crew members have already dropped out, fearing retribution.

Mustafa al-Sawwaf, an under secretary in Gaza’s Ministry of Culture, said Hamas would not object to the show if did not offend or use profanity. “The satire should not exceed the limits,” he said.

The program’s team hopes to tiptoe through sensibilities by skewering all Palestinian leaders equally. And they are releasing the show to YouTube to avoid being seen as aligned with any Palestinian media — much of it loyal to either Hamas or Fatah. But they also avoided Palestinian media because they worried about censorship; their producer, Mr. Abu Shanab, has promised a hands-off approach.

“There are people who sat with us and said, ‘make it lighter,’ but we won’t work like that,” Mr. Alsawafiri said.

“We are stepping on the gas,” Mr. Sourani said.