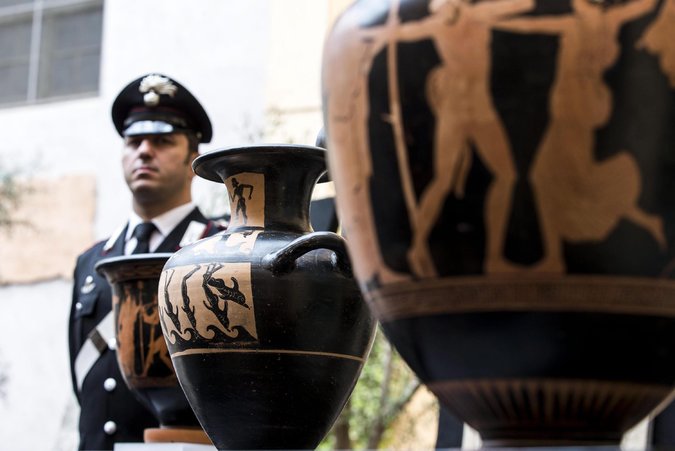 ROME — At first glance the 25 artifacts displayed in the courtyard of a former convent just off the Tiber River here on Tuesday seemed to have little in common: three first-century B.C. fresco fragments from Pompeii were exhibited alongside fifth- and sixth-century B.C. Etruscan and Attic vases, a 17th-century Venetian cannon, a 12th-century mural fragment depicting Christ and three rare 17th-century books.

What they shared was a nefarious past. Each had been looted from Italy and smuggled into the United States in recent decades, only to be recovered in from American museums, auction houses, private collections and even a university.

“Italy is blessed with a rich cultural legacy and therefore cursed to suffer the pillaging of important cultural artifacts,” the American ambassador to Italy, John R. Phillips, said at a news conference where the objects were exhibited. He said that a collaboration between American agents and Italian investigators had “borne fruit in returning some important artifacts to their rightful home in Italy.”

The effort was carried out by the Italian art theft squad — the Carabinieri Tutela Patrimonio Culturale, or T.C.P. — working with officials from the Immigration and Customs Enforcement unit of the United States Homeland Security Department.

Inquiries were begun in the last decade or so in nine Homeland Security field offices, including New York City, Buffalo, Baltimore, Boston, Miami and San Diego, leading to the returns.

Gen. Mariano Mossa, commander of the T.C.P., said at the news conference that the value of the objects was difficult to gauge. But the quality and rarity of many of the artifacts made them irreplaceable, officials said.

Each artifact returned to Italy had its own story.

The three first-century B.C. fresco fragments depicting human figures, for example, were stolen on June 26, 1957, from the Culture Ministry offices at Pompeii. Tracked to a San Diego warehouse, they were taken by agents in September 2012 from the private collection of an unnamed “American magnate” before they could be sold at auction, Italian officials said.

The authorities later identified the frescoes as belonging to the Allen E. Paulson Trust, which forfeited them to the United States government, which then returned them to Italy.

An Etruscan black-figure vase with dolphins, dating to 510-500 B.C., was seized from the Toledo Museum of Art in Ohio. The museum had acquired it in 1982 from Giacomo Medici, an international antiquities dealer. Mr. Medici had provided the museum with “false provenance documentation,” Italian officials said in a statement. An Attic red-figure vase, acquired from Mr. Medici in 1983, was recovered from the Minneapolis Institute of Arts, which returned the piece once its illegal provenance was determined.

Several artifacts were seized from auction houses and art galleries.

Three 17th-century books stolen from the National Historical Library of Agriculture in Rome were also recovered, two from a private collector in San Francisco and one from Johns Hopkins University in Baltimore. A representative from the university had bought the antique book “Historia Naturale di Ferrante Imperato Napolitano” in a 2011 Italian auction.

General Mossa said on Tuesday that no criminal charges had been filed regarding any of the returned artifacts. In some cases, the statute of limitations on any crimes would have expired. In others, the paper trail for an artifact’s import into the United States was too garbled to reconstruct.

The artifacts will return to the areas of provenance from which they were looted and will be exhibited in local museums.